And we’ll have fun, fun, fun ’till daddy takes the T-bird away. The beach. The sun. California has flirted with national popularity ever since the Gold Rush. And when filmmakers discovered the endless summer of Hollywood, its ascent to national dominance as a symbol became assured. But it really wasn’t until the 1960s that California became the center of the youth-culture universe. From the Beach Boys to the Doors, California was where it was at. So, when the Maurice Lipsky Music Co., a prominent importer and distributor in New York City, wanted to name the more adventuresome parts of his Japanese-made Domino line, creating an association with the Left Coast seemed natural.

Lipsky, by the way, was the company that offered the Orpheum brand of guitars at least from the 1950s on, if not earlier. Many Orpheum’s were made by United Guitars of Jersey City, NJ, the successor to the Oscar Schmidt Company. United also built most of the Premier guitars sold by the Peter Sorkin Music Co. There is some evidence that Lipsky’s Orpheum name was used on some Italian Wandré guitars, as well.

In 1967 Lipsky introduced a line proto-copies carrying the Domino brand name. Most were inspired by European models such as the EKO Violin guitar. Among the offerings were two models sporting a California cache, the #502 Californian, an asymmetrical copy of a Vox Phantom, and the #CE82 Californian Rebel (wouldn’t California Rebel have made more sense?) shown here. As far as I’m aware, the Californian Rebel was like no other guitar available at the time. I suppose you’d call this a semi-solid, since most of it is solid, but built in halves with a sound cavity routed out under the one sound hole. The top has a nice German carve relief, which makes the painted-on “binding” kind of amusing! The slotted head adds a kind of retro vibe. Note the cool dots along the top side of the bound fingerboard. What looks like a rosewood pickguard is wood grained plastic. Like a lot of mid-’60s guitars, the vibrato has a flip-up mute, basically a spring-loaded bar with a piece of foam rubber that deadens the strings. Kind of neat, but it’s hard to imagine how anyone would use it. 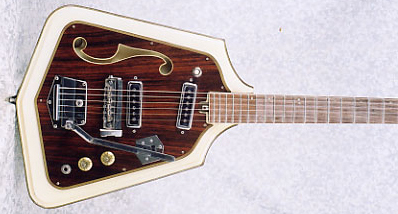 With these big chunky pickups you get a 50-50 chance on having good sound, or maybe much better than that. Most are pretty high output for a single-coil. I once bought a bag of these and found pickups ranging from 5K to a whopping 13K resistance (a hot Humbucker runs around 8.5K)! To make these even cooler, the two sliding switches are attached to different value capacitors to give you more tonal variety.

Who actually built this guitar is unknown, but these pickups appear to be associated with Kawai guitars, and that’s probably a good guess.

Alas, the 1960s were closer to the heavy, meandering solos of the Doors than the strum-a-lum twang of the Beach Boys when this guitar appeared. Besides, the guitar boom of earlier in the decade was grinding rapidly to a halt. 1966 was the peak year of guitar imports, with a dramatic decline in ’67. In 1968 Valco/Kay and a bunch of Japanese makers went out of business. Maurice Lipsky drops from sight around this time, and the industry went through a period of transition which yielded the Copy Era of the 1970s. Still, the Domino Californian Rebel is a very boss guitar, perfect for picking Pipeline on the beach at sunset.