The Seventies was the era of Classic Rock, so it’s not surprising that so many new guitar brands were flourishing then. But it was a less innocent time than the Sixties, and it soon became known as the “Lawsuit Era”. Here’s all you need to know about all the best,  the most badass, and the most copyright-infringing guitars of the time. 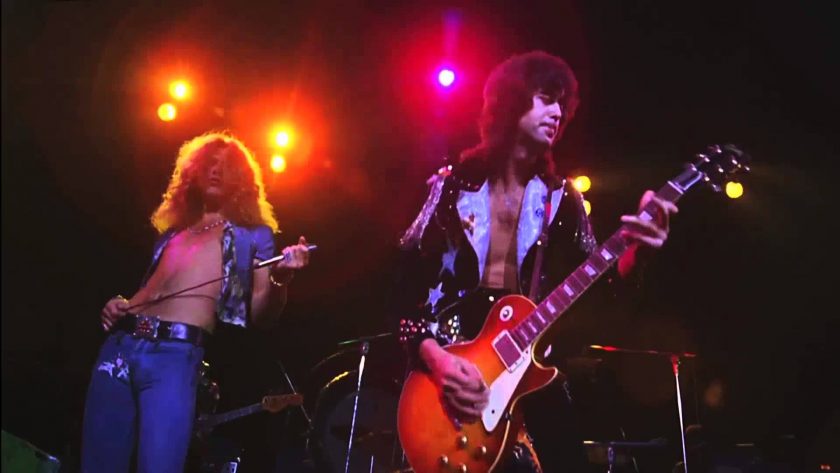 Led Zeppelin helped to popularise the Les Paul in the 70’s, when many great copies were made

Two major issues defined the progress of electric guitars for most of the seventies. 1) Companies outside North America vastly improved the quality of their guitar manufacturing and 2) Companies inside North America – namely Fender and Gibson – took their eye off the ball and did exactly the opposite.

By this time, many guitar manufacturers from the Far East had 10+ years experience under their belts, and the improvement in quality began to shine through. Univox, Kawai, Silvertone and Domino were starting to deliver guitars that – from a price / quality point of view – were beginning to eat into the markets that Fender and Gibson dominated. Not only was the manufacturing quality improving, but the quality of the REPLICATION was reaching new highs. The lawyers at Gibson started to get restless, and young guitar players like myself were also getting restless… I could not wait to go out and buy a UNIVOX Les Paul for 1/5th the price of the real thing! Damn, it was so inexpensive that I could almost afford to smash it on stage! Cool! But as the saying goes, all good things must come to an end.

Towards the end of the 1970’s, Fender and Gibson were loosing market share. That is why we hear so much about the “Lawsuit ERA” guitars. Late in the seventies, Gibson Guitars won a legal battle for patent infringements, which over time, shut down all but a few “copy” guitar manufacturers worldwide. This allowed some elbowroom for Gibson and Fender to rethink and retool their operations to fortify their position in the market. To avoid the same problem happening again, Gibson bought Epiphone and started building some very nice Imported Copy Guitars! Fender opened facilities outside North America under different brand names like Squier.

Here is a typical selection of 1970’s Fender and Gibson copies. These were all imported from Japan under different brand names. Also a sweet ’74 Gibson Les Paul 55.

Here is a selection of Mosrite copies from the seventies, along with one original Mosrite. The GM Custom is actually all original Mosrite parts built by a former employee, Gene Moles, after the Bakersfield Mosrite factory closed. The Univox guitars are popular today because Kurt Cobain of Nirvana used one. I also have some additional Mosrite copies farther down this page, some listed under the 1960’s guitars and the best one on the 1980’s.

If you like those guitars but can’t find a vintage one, Eastwood Guitars is currently reissuing several of these designs: check these Eastwood Mosrite reissues.

The Ventures were very popular in Japan and that is why so many Mosrite copies were made during the 1960’s and the 1970’s. Few of them, however, compare to the real thing as shown on the 1980’s guitar page.

KAWAI was one of the better quality manufacturers to come out of Japan in the seventies. Here is a nice selection of their guitars. My favorite is second from right. This guitar is absolutely MINT. It belongs in a museum. Hmmmmm. I guess it is!

Eastwood – once again! – have reissued a legendary Kawai model, the Eastwood SD-40 Hound Dog, a fantastic re-creation of the Kawai used by bluesman Hound Dog Taylor.

Here are some additional examples of Les Paul reproductions from the 1970’s. On the left is a very nice Hondo Deluxe 748 Mark II. Flame top, set neck, humbuckers… all that you would expect from the real thing at 1/8 the price. Next to that a blonde Sekova, a sunburst Hyundai, a Tobacco Sunburst from Univox. Lastly is a fantastic Tokai Set Neck with the historic Sunburst Finish. This is an incredibly nice guitar. The 70’s Tokai’s go for nearly the same price as a real Gibson these days. Once you play one you’ll know why.

Here is a grab-bag of assorted 1970’s guitars, mostly from Japan.

A few years back I wrote up a piece about my pursuit for the perfect Mosrite copy. Scattered across the 1960’s through the 2002’s guitar pages you will find almost two dozen different attempts. Here are some of the 1970’s acquisitions. On the left, a nearly perfect 1972 Mosrite Ventures Model. Mint. Next to that are a pair of Univox Hi-Flyers and a Silvertone Slider. This guitar is pretty cool because a) it has a wicked flame fiish and b) it has an individual slider volume for each pickup. This allows for a wide variety of tone setups because you can dial in as much or as little of each pickup you want.

Cool.Somewhere along the way I decided to build my own Custom Mosrite Copy. I wanted to put together a guitar that had the Mosrite look but was built for repeated abuse as a stage guitar. It started with as Silvertone shell, just the body and neck. I put Gibson Tuners on it for stability. Next I selected some wild vintage EKO screamer pickups that were extracted from a deceased EKO 700 4V. Then I had a custom pickguard made at WD Products in Florida. New pots, switches, bridge, etc and a few days locked in a room. Voila! A one of a kind Mosriteko.

An early 1970’s Conrad Strat and a Lotus Les Paul. The Conrad and the Aria are extremely well build guitars while the Lotus is most certainly not. However, I have a Lotus on my 1980’s page that is fantastic! Next to that is an Inter-Mark frmo Japan. Well built guitar, MUCH better than most semi-hollows from this era. You can’t tell from the picture but this thing is HUGE! 18″ across the body where an LP is about 12″. next to that is an old Lyle SG. 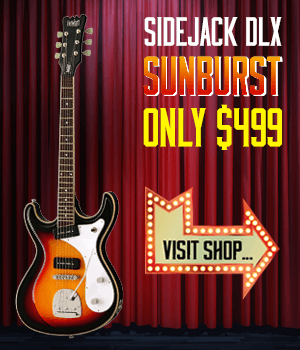