It’s not often you see a guitar than looks like a squashed Strat, one that got run over by a truck! On purpose, no less! Or maybe a better description is a guitar that came right off the set of the ’90s Kitsch, campy classic, Pee Wee’s Playhouse. You remember Pee Wee Herman, so fond of Rube Goldberg machinery, dancing to Tequila on the biker bar, on a fateful quest to find his stolen bicycle that led him to the Alamo. It may not have been pursuit of stolen goods that brought me to discover Alamo guitars, but it may well have been fate!

If you’re like me, you totally missed Alamo guitars. I only became aware of them in the 1990s when a dealer friend of mine almost shyly revealed he had a whole collection of them in his basement.

Learning about Alamo guitars put me on the scent of a story and, with a tip from Chris at Krazy Kat Music, I found myself on the phone with one Charles Eilenberg, born in Newark, NJ, then living in San Antone. Eilenberg had studied electronics and after World War II was recruited by Milton Fink of Southern Music, the Texas publisher and distributor, to set up a manufacturing operation. In 1947 Alamo began making phonographs and battery-powered radios. Alamo guitars and amps entered the world in around 1949-50. 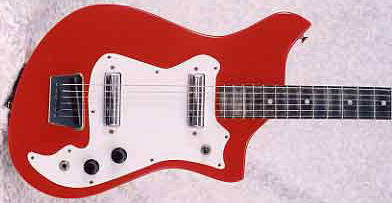 Alamo actually may have had higher pretensions to quality in the early days. Some of its early tube amps are pretty good and compare favorably to other smaller ’50s producers like Premier. But in around 1962 Alamo struck a distribution deal with C. Bruno & Son and basically began competing at the low end of the market, a poor man’s Danelectro (check out the bridge) or Harmony or Kay. Even Teisco. Their distribution appears to have been regional and spotty, which explains shy I’d never seen them before. Indeed, Eilenberg described a brisk trade South of the border, including into South America.

Early Alamos were somewhat inspired by Rickenbacker guitars, but by 1965 their designs had clearly gone over the top. In fact, it’s safe to say that, even in a whacky pack like that of the mid-’60s, Alamo guitars were among the boldest in America! Like this 1965 Alamo Fiesta Model 2586R!

While these look like solidbodies, they’re actually hollow, with birch plywood top and back over a hollow core, a construction method Alamo preferred until the final days, when true solids joined the line.

As cool as the Alamo eye candy is to look at, these pretty much play like you’d expect from road kill! Actually, the little single-coils are no worse than much other ’60s fare, but let’s just say they’re an acquired taste!

Pee Wee didn’t find his bike when he reached the Alamo because, as you’ll recall – in an epiphany of disappointment that ranks right up there with Voltaire’s injunction to tend your garden at the end of Candide – there’s no basement in the Alamo! For me, the Alamo basement treasures my friend introduced me to did let me reach Mr. Eilenberg, a lucky fate because before I was able to get his story into print, he’d passed away to meet his fate. If I hadn’t talked to him, we might never had been able to properly remember these Alamos.