I’ve always had a bit of a taste for plastic on my guitars. Oh, don’t get me wrong. I love flamed and quilted maple, rich ribbon mahogany, Brazilian rosewood, abalone pearl. But there’s something so wonderfully cheesy about the use of plastic on a guitar. I guess that’s one of the reason why I like this otherwise relatively humble Italian-made Gemelli 195/4/V from around 1965.

Back in the old days—no, I mean the really old days—expensive guitars might have ivory or even pearl fingerboards. These were pretty rare, of course, limited to either presentation guitars or royal clients. The first plastic to be invented was celluloid in the mid-1800s. Actually this had to do with billiards, not guitars. Like expensive guitar fingerboards, billiard balls were made of elephant ivory. But it was clear to the ball manufacturers that this situation couldn’t last. They sponsored a competition to find a replacement, and celluloid won. Now, it had a problem of being highly explosive, which presents a problem if you’re going to poking sticks at it! Still, it began a whole new industry.

Fortunately for us, engineers figured out the incendiary problem. Just when celluloid began to be used on guitars is unknown. But by the late 1920s manufacturers had learned how to make it in sheets and strips, and it began to be used as pickguards and binding. They also figured out how to make it look like pearl and sparkle gold. These began to appear on guitars. The former we now call pearloid; the latter was known in the guitar trade as “glitter.” 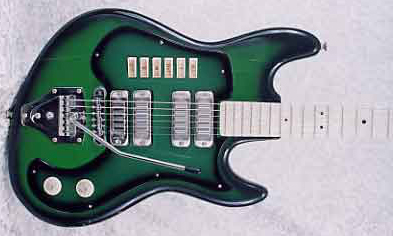 By the Great Depression of the 1930s, pearloid, along with decals (“decalcomania”), became a popular way to spruce up cheap guitar materials and make people feel like they were getting something more than they could really afford. Pearloid was used for pickguards, trim, headplates, fingerboards. By this time “tortoise” celluloid was also common for use in pickguards (yes, real tortoiseshell used to be used).

After the War came the surge of electric guitars and the surge in population known as the Post-War Baby Boom. These two surges crashed together like breaking waves in the early 1960s, with a resulting tsunami of demand for electric guitars. Far more demand than American guitar manufacturers could supply. Some enterprising businessmen turned their gaze East to the inexpensive manufacturing possibilities in reconstruction Japan. Others looked to reconstruction Europe, where mass-manufacturing of guitars was an already established industry. Compared to American standards, costs were relatively inexpensive there, too. Sweden, the Netherlands, Germany, and Italy were all major suppliers of guitars to musically inclined Boomers.

Curiously enough, most of the established European instrument making centers included a variety of instruments, and especially accordions. Fortunately for the latter, there had been an accordion boom in the US during the mid-1950s. After that went bust, they had excess capacity. When the tide guitar demand began to rise in the early 1960s, the accordionistas were in a position to call on the guitar makers up the street to help them ramp up to meet American needs.

And, of course — ta da— accordion makers were highly skilled at working sheet plastic! So, it should come as no surprise that among the first European electric guitars to get to the US were the sparkle-plastic covered Hagstroms from Sweden in around 1958 or so. The demand had yet to emerge. But when it did, Hagstroms were joined by plastic-covered EKO guitars by Oliviero Pigini in around 1963. Others followed.

All of which is a long way around to this Gemelli guitar. Much of Italian guitar making was centered around Castelfidardo, Italy. In fact, there were a whole bunch of makers in that area who supplied guitars during the ‘60s, most making guitars for other distributors using whatever brand name was required. One of them was Benito & Umberto Cingolani, located Recanati not far from the Pigini plant. Among the brands they built was Gemelli.

A number of features make this guitar special. The pearloid plastic fingerboard is an obvious one. Long gone are the days of the simple sheet pearloid. This is a hard, nice, fast surface that plays like a dream. Another is the nifty black to green sunburst finish! These were especially popular on both Italian and English guitars during the ‘60s, especially Burns guitars, though American makers were not especially enamored of the style (Harmony did one at the end of the ‘60s and early ‘70s). . Finally, there’s the way cool push-button controls, a leftover from the accordion days. These give you All, Treble, Treble and Bass, Middle, Bass, and Off. Pretty neat, huh? The guitar is lightweight and the vibrato has a butter touch. Overall, this is a darned good starter guitar!

Plastic-covered guitars didn’t go over all that well in the US and they were gone by around 1966 at the latest. However, in this case, the plastic only enhances what’s a swell little guitar, not putting glitter on a piece of junk.