It’s always dangerous to deal in stereotypes. Nevertheless, there’s often a grain of truth lurking behind them. Take guitars (what else?) from the ‘60s. Often it only takes a glance to sus where a guitar came from. Look at a Japanese electric guitar and you won’t mistake it for anything else. Or move to Europe. You’d almost never confuse a German guitar—full of engineering bells and whistles—for an Italian one (loaded with style), or vice versa. Take this c. 1965 Juliett Delux guitar.

You don’t need years of study to figure out this came from south of the Alps. A German guitar would have an innovative laminated neck and perhaps two more switches than you can figure out what to do with or a finger-operated, spring-loaded vibrato. No one but Italians—or someone pretty close—would make a guitar in avocado green with a green-black-silver mesh pickguard and matching pickup covers! I didn’t need two seconds to grab it off the dealer who showed it to me, no matter where it came from! I mean, avocado green?! You gotta own a guitar in that color, especially if it comes with color-coordinated appointments!

But there’s a long way from figuring out at a glance that this is Italian to figuring out what the heck it is! Like many of the guitars I’ve picked up over the years, this Juliet became an unsolved mystery buried in the back of my guitar room for ages. Actually, quite a few apparently Italian mysteries collected there gathering dust. 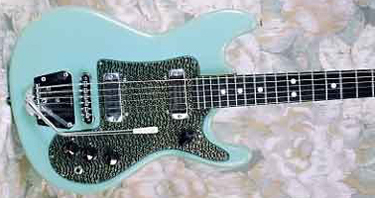 But I have this thing about learning what’s up about any guitar I own. It’s why I got into the guitar history game in the first place. So these guitars nagged at me. Then one day I discovered www.fetishguitars.com, a web site devoted to Italian guitars. This site is about the best—and almost only—source on the subject at this point in time.

Besides a general lack of information, part of the problem involves the fact that so many Italian—read European—guitarmakers, like the Japanese, made guitars for a lot of different people carrying many different brand names and logos. Just as guitars made by Tombo in Japan ended up in the U.S. as Norma guitars, guitars made by various Italian manufacturers ended up in both Europe and America carrying a wide variety of names, usually not that of the factory.

Back to this Juliett Delux. Mucking around the fetishguitars.com site led me to a company named Zerosette from Castelfidardo, Italy. Castelfidardo was—and is—one of the world’s centers of accordion-making. It began there in the late 1800s and even today it’s the home of an international accordion festival and competition. Its heyday was the 1950s when the accordion craze briefly swept the U.S. That soon ended, and, as we all know, guitars eventually took over. It turns out that Castelfidardo is located in a region of Italy with a long tradition of guitarmaking. So it was not that hard to add guitars to the mix. This explains why EKO guitars were so successful in the U.S. the early years of the ‘60s.

One of the more obscure shops located in Castelfidardo was called Zerosette. Virtually nothing is known about the actual operation, though you may have encountered their work in various guitars bearing the Goya, Contessa, and Sano.

Tucked among the gems produced by Zerosette are guitars bearing the Juliett Delux and JG brands. A comparison of the shape of one of the Juliett solids is the spittin’ image of this guitar…and even in light green! A look at the pickups shows a certain similarity of shape to others made by Zerosette. None of the examples shown there are quite as fancy as this guitar, but it’s pretty clear that this came from the Zerosette shop. Jack Marchal of fetishguitars.com believes this to be from 1965, based on the components and style. JGs may or may not have been related to the Juliett brand’s owners (other than being made by Zerosette); I suspect them to be for the same company but slightly later.

So, I now feel like I know where this guitar came from and who made it, as much as you can know with our lack of knowledge. When it was made or for whom? That remains a mystery.

All I know for sure is that an avocado guitar with matching parts, that’s way cool. Thank god for Italian guitars! Like I said. Style!