Back in the late 1960s—Jimi notwithstanding—the cat’s pajamas of amplifiers were solid-state. Tube amps were heavy and prone to feedback. Solid-state amps were clean, big, and loud. I ran a whole band off a humongous 350-watt Mosrite amp. The mix sucked, but we were loud! The most desirable amps at that time were made by Standel and, to a lesser extent, Kustom (depended on your kind of music). It was only later that I learned that both companies also made guitars, like this ca. 1966 Standel Model 101 Custom Deluxe Solid Body Guitar. Heavy!

Fast forward to the go-go ‘80s. Not about stocks or dancing. Go-go because I was buying guitars hand over fist. Weird guitars. Mystery guitars. One of those guitars snared in my trap was this Standel. I held back at first because there was some damage to the pickguard near the jack and I had no idea what this thing was. But plastic can be fixed, right? Once I started looking into this guitar, I was glad I didn’t pass.

Roll the tape further forward and I still don’t know much definitively about this particular guitar. Standel was begun as a tube amp company by Bob Crooks in Temple City, California, near Los Angeles, in 1953. The solid-state amps came in around 1965. As indicated, he was pretty successful, so it was a logical next step to cash in on the guitar boom and introduce a line of guitars. In around 1961 or 1962 Crooks approached a young Semie Moseley, who’d been making waves hot-rodding the guitars of local Country-Western stars, and asked him to design a guitar that was “as close to being a Fender as possible without being a Fender.” Moseley said sure, grabbed a Strat, flipped it over and traced the outline upside down. Voila, the first Standel guitar! Moseley build about 25 of these guitars for Standel, but the project languished for reasons unknown. It was this design that became the legendary Mosrite Ventures guitars of 1963. 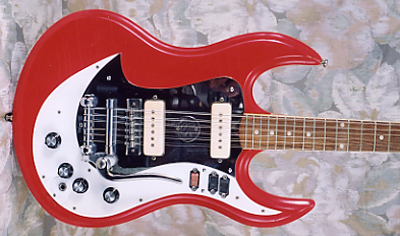 Following the brief association with Moseley, Crooks began selling Dobros made in El Monte, California, by Emil and Rudy Dopyera, who came out of retirement to revive Dobro brand resonator guitars. That lasted until 1965 when Semie Moseley purchased Dobro. That same year saw Standel’s association with former Mosrite employee Joe Hall, the man who made the famous Hallmark guitars. These were pretty much Mosrite knock-offs. It is entirely possible this guitar is one of those; the CTS pot code is 137 6532, dating it to August of ’65. Some reports have Crooks getting some guitars from another guitarmaker named Bill Gruggett of Bakersfield, California.

After the brief stint with Hall, Crooks turned eastward to the Harptone Manufacturing Corporation in Newark, New Jersey. Harptone is still known today as a manufacturer of high-quality hardshell cases, but during the ‘60s they also did some guitarmaking (they’d done some before World War II, as well). Their chief luthier was the somewhat eccentric Sam Koontz. Koontz built custom-made archtops and ran the set-up and repair functions at Philadelphia Music Company, the principal importer of German-made Framus guitars. From around 1966 until around 1969 Harptone/Koontz built a variety of interesting, mainly thinline hollowbodies carrying the Standel brand.

But this is not about them. It’s about this odd guitar. Obviously, this is kind of a cross between a Burns Bison and a Mosrite Ventures. A lot of features are clearly Mosrite, including the German carve top and zero fret, though Koontz used these, too. This is a heavy guitar, probably made of mahogany, though it could be maple. The single-coil pickups look a lot like those made by Micro-Frets, but there’s no reason to think there’s a connection. They are pretty good pickups, with 3.88 kO of output. But check this out. They are epoxy potted. Now, who did that? Another fellow with New York/New Jersey connections, Dan Armstrong. Could he have done these? Dunno. These are replacement knobs, by the way, though everything else is original.

Other curious characteristic include a neck-tilt adjustment and two sets of volume/tone controls. The red switch lets you toggle between them. I guess that’s so you can pre-set them for lead/rhythm. The neck is nice and thin, but with a round profile that gives it a feeling of heft. The tuners are actually Grovers.

So, made by Moseley? Timing wrong. By John Hall? Bill Gruggett? Who knows? But probably not. By Sam Koontz? Most likely, though he didn’t do much with solids. Help from Dan Armstrong? Tantalizing, but unknown. In any case, despite its goofy looks, this is actually a pretty good quality guitar. Definitely a middle-level-plus axe with some professional features. Perfect for “Walk, Don’t Run” and “Pipeline.” Through solid-state or tubes, your choice! And even with the spotty pedigree a way cool blast from the past! Glad I grabbed it when I had the chance…