One of the very cool (for gear heads) fallouts of the Beatles on Ed Sullivan was the great amount of small, oddball guitar makers trying to strike it rich in the 65-68 era. Plenty of small makers from all over the world got the idea that they would go into the guitar business. 1965 was, by far, the biggest year in guitar production up to that point. But then a strange thing happened. Even though garage bands were cropping up all over the place, guitar sales started to shrink (slowly at first). Then, by the late 60’s, you started to see cheap imports from the Asian market competing with the lower end US made guitars (Kays, Danos and Harmonys and so on), putting a serious hit on the US budget brands. And these new makers (budget and high end) who started in the wake of ’65? Most went belly-up within a few years, but left for collectors some very neat-o guitars for our collections.

Check out, for instance, this rare bird. A 1966 Wurlitzer Gemini, made at the Hollman-Woodell guitar factory in Neodesha, Kansas. Part of Wurlitzer’s THE WILD ONES series (which included the more pedestrian-looking, but still pretty rad Cougar and Wildcat models), these were made to compete with the best of the domestic market. High end tuners (Klutsons), a wonderful chunky bound neck (like a Fender V shape, but a bit thicker), and a great look highlight the Gemini.

Other cool features include stereo pickups. That’s right – the guitar is wired in stereo, so that the neck pickup is one channel and the bridge pickup the other. With a stereo cord that has a “Y” splitter, that means you can send your bridge pickup to one amp and your neck pickup to another. There’s a traditional 3 position toggle to select the pickups, or set it for both and use the blender knob on the treble side horn. It’s a trippy sound to stand in between two amps with the split signal. Put the tremolo and reverb on one of them, and it’s a great sound. You can also run both pickups, of course, into one amp with the proper cord.

Each pickup has a rocker switch labeled “Jazz” and “Rock”. Predictably, the JAZZ setting cuts the output and trebles, offering a m ore rounded mellow tone. The ROCK setting opens the tone up a bit, boosting the treble and volume. It’s a very versatile guitar, with a high end feel.

The vibrato, with its very stylish W cutaway feels like a cross between a Bigsby and a Mosrite. It has the position under the hand and sound of a Bigsby, but with a hint of the feathery lighter touch of the Mosrite. The bridge has separate plastic posts that intonate very well and allow for the vibrato to return to pitch consistently. The balance is wonderful as well. It’s an odd shaped guitar, but it’s very comfortable to play standing or sitting.

And, obviously, it’s one of the best looking guitars to come out of that king of all great-looking-guitar decades, the 1960’s (sorry all you pointy 80’s fans). If the Airline Reso-glass futuristic model most associated with Jack White earns the nickname of the Jetson model, well what is the Gemini? It out Jetsons the Jetson model itself. Maybe it’s the Spacely model. Or the Cogswell’s Cogs model. 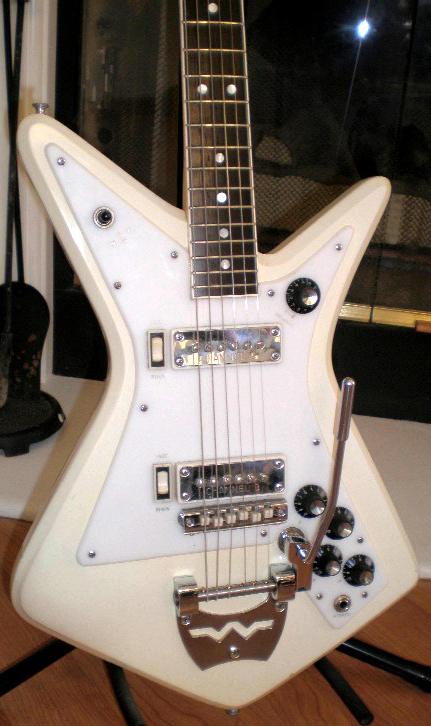 So why didn’t they catch on, if they’re so great? Well, a lot of great companies couldn’t withstand the relative slump of the late 60’s and the birth of quality imports. Think of Danelectro, Valco and Kay all going south within a year of each other. Also, maybe they didn’t have enough capital to make enough noise outside of their Kansas factory. Maybe they just weren’t lucky enough to be in the right place at the right time.

But if you’re looking for any areas where the guitar itself hurt its own chances in the hyper-competitive guitar market of the late 60’s, there are a couple. Wurlitzer could have done better in the finish and the pickups. The finish on all three Wild Ones models had a habit of peeling and cracking. This white Gemini (all three models came in Red, White and Blue) is in surprisingly good shape. It does, however, have the same pickups as the other models, and this isn’t a great thing. While the pickups (the same as one the famed LeBay 2X4 – they were made at the same factory) look to be between the size of a DeArmond Silverfoil and a P-90, sadly they don’t share tone with either of those great pickups. They are clean and solid, tone-wise, but their output is very low and they can’t overdrive the dirtiest of amps. They can get a pretty good snarl going with a nice preamp or a good overdrive pedal, but they aren’t going to sound too tough going straight into most amps. Power and tone-wise, the popular guitar they sound most like (output-wise) is the Fender Mustang.

These are incredibly rare. Most estimates put the entire Wild One line at under one thousand guitars. Of those, the Cougar was the most popular, followed by the Wildcat, leaving the Gemini as the rarest of the rare.

Cool shape. Awesome retro vibe. Stylish. Super rare and hard to come by. And they could use a pickup upgrade. Maybe the more standard MONO wiring. Sounds like a guitar that might be just right for a cool company that re-issues rad guitars from the 60’s (hint, hint, Mike). If enough of you make enough noise, maybe this one could come back from the past.