Accordions. If you play guitar, you probably don’t think much about them. But from several perspectives they played an important role in giving the guitar a boost to prominence that it now enjoys. A role that is nicely evidenced by this very swell c. 1967 Galanti Grand Prix electric guitar.

Accordions were actually pretty popular in the US from the 1920’s on, probably due to their popularity in Vaudeville acts. They were heavily associated with Italians, which is no surprise since the center of accordion-making then and to this day is focused on the area of Castelfidardo on the northeast central Italian coast. The entertainment industry was one avenue open to many Italian immigrants, and by the early 20th Century there were a lot of Italian acts working the Vaudeville circuits, often playing to ethnic stereotypes. Accordions began showing up in Sears catalogs in the 1920s and accordion orchestras for kids began appearing. A number of mostly Italian virtuoso accordionists became popular in the 1930s, although the rise of Polish polka music (with accordions) also had influence in certain areas of the U.S.

But the real rage for accordions came in the mid-1950s with the early Post-War Baby Boom. Suddenly accordions proliferated. Companies built up large chains of music studios and imported and distributed Italian accordions bearing their name. One such was a company out of Chicago run by Frank Galanti. 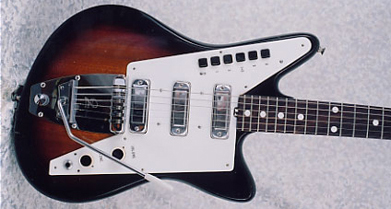 Galanti was a well-known Chi-town accordionist, but he was probably also a relative of the firm that made the accordions he imported. Galanti accordions were invented by Antonio Galanti in a small village called Mondaino near Romagna in 1890. Production began in 1917 and, indeed, the company is still in operation.

Unfortunately for all these squeezeboxers, by the mid-1950s the accordion craze had run out of air. Accordions were no longer hip. Then, after some floundering, the salvation arrived in the hands of the Kingston Trio. Significantly, in around 1959 the publication Accordion World changed its name to Accordion and Guitar World! Virtually all the accordion manufacturers added guitars to their lines. The fabled Guitar Boom had begun!

Few of the early acoustic guitars built by the accordionistas were particularly notable, but especially after the Beatles, they produced some of the classic electrics. This c. 1967 Galanti Grand Prix 3003 (#2843) is a real sweatheart. It’s made out of mahogany and sports a lot of typically European appointments, including nice Van Ghent tuners and three nice clean single-coil pickups. As on many guitars made by the accordion guys, the electronics are inspired by the push-buttons on squeeboxes, so here you get buttons for (in order): O (off, my fave), 2 (middle), 1+3, 3, 1, and M (all three pickups). As on a lot of Italian guitars, there’s not a great deal of tonal subtlety between positions.

Actually, Galanti guitars, mostly finished in subdued sunbursts, were pretty restrained for an accordionista guitar, which typically favored plastic coverings, sparkle, or at least bold color schemes like black-green sunburst. IMHO Galantis were among the best made at the time. They got pretty wide distribution during their day, but drop from sight by 1968. Accordions did rebound a bit in popularity, though never as much as in their heyday. But at least we have them to thanks for cool artifacts like Galanti guitars!