What is it about the Japanese and the Ventures? I mean, I cut my teeth with the Ventures. They were the perfect band to learn guitar from. The Ventures took songs with often complex harmonic structures—like the wonderful Johnny Smith classic—and stripped them down to their basic melodies, gave them a simple rock groove, and played them clean. I had the sheet music to Smith’s song, but there was no way in you know where I was gong to play off that. But follow along with the Ventures’ single? You bet! Maybe that was part of their appeal in Japan. Or maybe it was just that they were one of the few popular American bands to bother to go to Japan to perform. That simple gesture got the band generations of loyal Japanese fans and kept the group afloat during those lean years of the late ‘60s when their sharp, clear sound was out of phase with pot-smoking kids who preferred to get lost in the purple haze of Inna Gadda Da Vida. 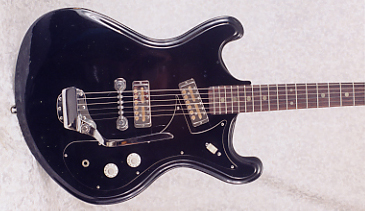 Whatever the reasons for their popularity in the Pacific, it should come as no surprise that when the Japanese guitarmakers hit on the strategy of copying popular guitar designs, the Ventures’ Mosrites were near the top of the list. Which partially explains this ca. 1967 Heit Deluxe V-2.

Actually, the first “copy” guitars by the Japanese were of their European competition. European guitarmakers from Italy, Germany, and Sweden were among the first to begin supplying the beginner-grade demand of American post-War Baby Boomers, just hitting adolescence as the ‘60s dawned. The success of EKO’s violin-bodied guitars and basses—a not-so-subtle nod to Paul McCartney’s Hofner—yielded a host of Japanese knock-offs by the mid-‘60s.

Once the notion of “copying” took hold, it didn’t take long for the Japanese attention to turn to other models. And it didn’t take long for them to begin eyeing those swell Mosrites played by their beloved Ventures. Perhaps as early as 1966, but certainly by 1967, a variety of Mosrite-inspired guitars were coming off Japanese production lines and making their way to American shores carrying a variety of brand names, including the Heit Deluxe seen here. These Mosrite-style guitars ranged from vague tributes such as those by Humming Bird and Guyatone to the first really exact copies like the Mosrite Avenger by Firstman.

This Heit Deluxe is almost certainly a version of the V-2 made by Teisco. It is identical to those shown in the indispensable book ‘60s Bizarre Guitars‘, except for the two-way sliding selector switch instead of the usual three-way toggle. Most guitar fans automatically think “Teisco” for anything Japanese, but the picture is far more complicated, of course! When you actually study Japanese guitars, you find a remarkable consistency in pickup use. While there are a few exceptions to prove the rule, Japanese manufacturers almost always used distinctive and exclusive pickup types. The ones shown here are variants on the little DeArmonds used by Harmony and are almost always found on Teisco-made guitars. As you might expect, there’s a lot of variability in the output of these pickups, but they can be quite excellent, as here on this guitar. This particular guitar is a little more reminiscent of the Mosrite Joe Maphis or Mark I than the Ventures model, but the inspiration is absolute. These are great guitars, with nice slim necks that play swell if you set them up right. As with many ‘60s solids, this has a mahogany body, although a lot of these guitars used sen, a native timber related to mahogany.

Less is known about the Heit brand. It was used on a number of Japanese and possibly early Korean acoustic imports in the late ‘60s marketed by G & H Imports (GHi) located at 475 Westminster Place in Lodi, New Jersey, a small town not far from Passaic near the junction between the Garden State Parkway and I-80. Presumably G and H were partners in the venture, but their names are unknown at this time. You can find their 1968 catalog and price list at www.vintaxe.com (a subscription site). This model is not shown that year, which is why I suspect ’67, but it could be slightly later. ‘60s Bizarre lists these as “c. 1968,” but that don’t mean it’s necessarily so. Other models shown in the Heit are not Teiscos, but could be Kawais. Other Kawai guitars have been spotted carrying the Heit Deluxe brand. The Deluxes were Heit’s better models, but that’s almost one of those distinctions without a difference. Pickups ranged from one to four. The acoustics look dreadful which is why I suspect a Korean origin. GHi apparently distributed to other retailers because in ’68 a half dozen Heits would set you back between $18-35 each!

Of course, you won’t find your Heit Deluxe for $35 any more, but you’ll still pay a heck of a lot less than for a genuine Mosrite! And, you’ll have a sweet little ‘60s guitar (well, not really so little; these are pretty substantial) to chomp down on whichever version of Walk, Don’t Run you prefer to play!

Let me know if you know anything more about GHi or who G and H were!