What were they smoking when they dreamed up Messenger guitars? Such an exquisite combination of the revolutionary and banal. Well, it was San Francisco in the Summer of Love, 1967. Imagine a Cheech and Chong routine. “Like, wow, man. What if we made the neck out of a magnesium-aluminum alloy so it wouldn’t warp and then continued the block of metal on through the guitar to cut down on feedback?” “Yeah, man, we could put cool Ricky catseye soundholes on it.” “Groovy! And we could wire it so you could play out of two amplifiers at once. Like stereo, man.” Have another hit. “Then we could make it a ‘peoples’ guitar and put crummy DeArmond single-coil pickups on it like on really cheap Harmony guitars.” “Like, wow, man. Right on.”

I don’t remember exactly when I’d heard about Messenger guitars. But many years later, having a nice collection of guitars with aluminum necks seemed like just what I needed! I needed a Messenger.

Sometimes these things are fore-ordained. No sooner had I decided to snare a Messenger than I scanned the ads in Vintage Guitar Magazine and turned up a minty Messenger for $750. I couldn’t believe my good fortune and got on the horn immediately. He was a nice chap, but he’d already had an offer of $1800. I didn’t want a Messenger that badly. (Little did I know what a good investment that would have been!) Crestfallen, I was about to hang up when he said, “But I’ve got this green pro refin I’d sell you for $350.” New paint or an extra $1500? You do the math! 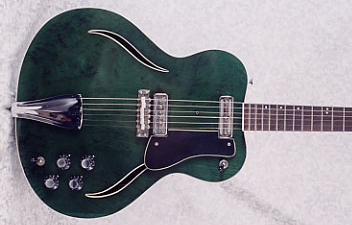 Messengers were revolutionary. While early Electro Hawaiian laps were aluminum “frying pans” and the Italian designer Wandré Pioli had made far-out aluminum necks in the late 1950s, Messengers were the first really modern aluminum-necked guitars. Created by Musicraft, Inc., Bert T. Casey, president, and Arnold B. Curtis, head of marketing, they play like a dream – just ask Mark Farner of Grand Funk Railroad, who used them (modified). The aluminum “chassis” eliminated the need for a heel, improving access, and it was actually tuned to A-440, supposedly to improve resonance. The M logo looked, well, like a big ’60s hairdo. The stereo concept was simple and great (two mono jacks for each pickup, but throw the switch and both pickups go through just one).

But, like so many cool guitars, the weak point in the Messenger’s armor was under the hood. Now, I love chintzy ’60s single-coils, even the microphonic units, but if you’re going to create a hi-tech axe, why would you put those DeArmonds on? Why not some Filter Trons? Or Gibson or Guild humbuckers, like John Veleno a few years later? Despite its alloy chassis, Messengers were hardly fit for the emerging heavy metal craze! In the end, it didn’t matter.

By 1968 Messengers had abandoned San Fran for the rarer clime of Astoria, Oregon, for “expansion” purposes. Shortly thereafter the Messenger had departed, if not shot with a smoking gun, certainly dead. And certainly rare. If you could find one, you’d gladly pay the $1800 I once passed on.