No, it’s not gym class when you had to tumble on those danged blue mats while a fascist coach watched the form of his best team. OK, I have issues with PE. And don’t ask me to tuck and roll. But back in the day, which for me was late ‘50s Michigan, when we used to wait to see a to-die-for Edsel go by, I used to subscribe to a hot rod magazine. I think it was called Hot Rod. It was mostly about California car guys who customized cars. Chopped. Channeled. Chromed. Flamed. To be honest, I was a kid and didn’t really know what it all meant but I remember this cat everyone idolized named Big Daddy Roth. Anyhow, I did know that the height of cool was to have your upholstery done up in “tuck and roll” vinyl. I was a bit east but they also must have read that rag out in Kansas, because it all led to the development of Kustom amps and guitars.

I remember seeing my first Kustom amp around 1967. Blue sparkle vinyl. Even in an era of hippies, tuck and roll vinyl was groovy. For better or worse, when I needed an amp for a band I ended up with this humongous 350-watt Mosrite, but that’s another story.

Kustom amps were the brainchild of Bud Ross and Fred Berry of Chanute, Kansas, who came up with the idea in around 1965. They were among the earliest solid-state amps (Kay’s 1963 Vanguard line was the first). Actually, the tuck and roll part began in the late ‘50s. A friend brought a trashed Fender Bassman amp to Ross who repaired it and re-covered it with tuck and roll, and very quickly other amps started coming in for the Ross treatment. Kustom amps were soon known as some of the badest powerhouses of the late ‘60s. 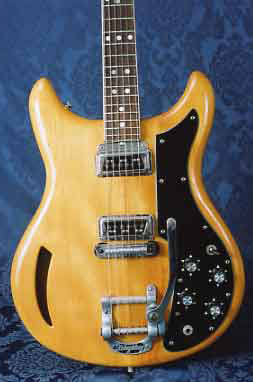 Ross designed a companion guitar in 1966, but that, according to Ross, got expropriated by the Holman-Woodell factory in Neodesha, Kansas, and became one of their Wurlitzer models. In 1967 he hooked up with Doyle Reeding and Wesley Valorie who began producing the Kustom guitar line. These guitars were carved out of two pieces of wood and sported a neat catseye soundhole. They remind one of Rickenbackers, but these were pure Kansas. Some came in cool “with-it” finishes like greenburst, though the top-of-the-line 1968 K200A shown here is natural ash. The better guitars came outfitted with DeArmond humbuckers; the lower models had single-coils. Kustom guitars hit the street in 1968 and were offered.

Kustom guitars were really quite well made—certainly better than the Holman axes made in nearby Neodesha—and are fascinating pieces of ‘60s American guitar history. Ross estimates that between 2000-3000 were produced between 1968 and ’69, though since it was really a small operation, those numbers may be very generous. They were basically distributed through Kustom amp dealers. I certainly hadn’t heard of them until a dealer friend offered me one and how could I resist? Could you?

Once I had a Kustom guitar I had to have a Kustom amp, of course. I got that from my old friend Marvin Povernik of Torresdale Music in Philly. Floor to ceiling guitars and amps with a big pile in the middle of the tiny little shop. It was one of those Marvin moments. “Marvin, I need a Kustom amp.” “Dig behind those over there, I think there’s one in there.” Five other amps and an inch of dust later my little black tuck-and-roll K-25 slid out from under a loaded shelf. Perfect! Not powerful, but plenty loud for a married house, if you know what I mean. And, easy to carry around for a guy who hated PE…