If you’re old enough and like whacky guitars, like me, you probably remember the great Guitar Player “Off the Wall” columns by Teisco Del Rey, the nom de plume of journalist Dan Forte. His was the first, and sometimes the only, story I’d read for a long time. Dan was perhaps the first to celebrate guitars whose names didn’t begin with M, G, or F. Dan usually worked the humor angle, but for those of us with an aesthetic eye, the guitars he featured became Holy Grails. One of the holiest of those was the 1968 Teisco May Queen guitar, a rare red version of which you see here!

Thus I was tickled pink when I landed my very own May Queen. And a red one at that! Almost all that are seen are men in black. So, is this worthy of being a Holy Grail? As usual, the answer is a mixed bag.

Let’s take the plus side first.

Coolness factor. Only the worst kind of snob would deny this maximum cool. A hollowbody guitar shaped like an artist’s palette with a catseye soundhole? No way that isn’t cool! 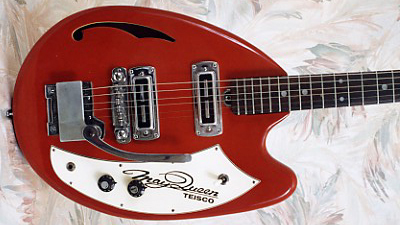 Now, there are some guitars that were once ultimate cool, like when the Flying V and Explorer debuted back in 1957. Radical! But, there have been so many knock-offs in the years since, their coolness factor diminishes accordingly.

Then there are guitars like the 1960 Kay Solo King, sometimes called the “Map of Ohio” guitar. Elsewhere I’ve dubbed this the ugliest guitar in the world. And it is butt-ugly. While it has some design consistency, there’s just no way this guitar will ever be cool. Except to me, of course, sick-o that I am! But that’s another issue!

Rarity. As far as I know, the May Queen was made for domestic consumption—or at least regional consumption—only. I don’t think it was ever exported here. Then again, it does have an English engraving on the pickguard. Still, I’ve never seen a catalog, ad, or other evidence of it’s being sold in the US. These just do not come around very often. We have no idea how many were made, but ‘60s Japanese guitars are fewer than most people suspect. And, as mentioned, a red finish is really special. This rarity has to contribute to Holy Grailness.

The Teisco May Queen appeared at a significant time in Japanese guitarmaking. Teisco, which had formed following World War II as a Hawaiian guitar and amp company, had considerable success with exporting into the 1960s. They were probably the most successful brand during that decade. In January of 1967 they were acquired by Kawai, the piano company turned guitarmaker. Kawai seems to have kept the Teisco and its own lines separate throughout this period.

In any case, in 1968 the Japanese companies were feeling their oats and began to come up with original guitar designs. A whole spate of Japanese-style guitars appeared, reflecting creative thinking, not just copies of other people. This was, perhaps, the first golden age of Japanese guitars. All contributing to coolness.

Now the other side. Teisco just never did do hollowbodies too well. Some of their solidbodies are spectacular. They have great features and, with a little attention to set-up, can far surpass guitars in the same class, including those made in the US and Europe. And sound remarkably good. The pickups on this May Queen are nice, beefy single-coils, but the whole package just comes off as sort of, well, limp. Good if you’re back is bad, but lacking “heft.” It plays fine. These simple rip-offs of Bigsby vibratos are really pretty good. Maybe if the cats eye was really bound, but it’s just paint. There’s a lot of visual slight of hand here. Put it all together and, well, given a lot of choices of what guitar to pick up and play, this keeps sliding down the list. There’s no problem setting it up to play. It’s NOT bad. It’s just that I’d choose my vinyl-covered Teisco with the platform vibrato first… Or, to be honest, my Levinson Blade… Unless you’re really looking for the right image.

So, is this a Holy Grail? This begs the question, “What you mean pardner?” There are so many ways to define desire. Combine rarity and art, and this is way desirable. Consider a player’s criteria, and it become less so. Depending on how many guitars you want to own. Quantity was never an issue for me! At least I was able to check this off my “Off the Wall” check list!