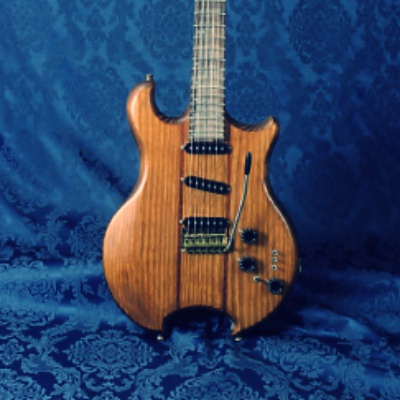 EKO guitars were almost archetypically “’60s” guitars.  Cool colors, cool shapes.  And not expensive.  They were the stuff of garage-band dreams, at least before Japanese guitars dominated the budget guitar market.  But, if you’ve ever had much experience with EKOs, you know they were not especially durable, probably because, in the rush to meet the endless demand for guitars back then, the woods weren’t always all that well seasoned.  Thus I was really surprised when I walked into Cintioli’s Music in Northeast Philadelphia and found a batch of relatively upscale EKOs…from the 1980s!  What’s up with that?!

EKO guitars were made by Oliviero Pigini & Company of Recanati, Italy, just north of Castelfidardo.  Castelfidardo was and is pretty much the center of the accordion manufacturing trade, which arrived there—according to legend—in the 1880s.  Accordions as in “piano accordions,” with a full keyboard, not the older, little button types.  Piano accordions came to the U.S. during the early 20th Century, mainly played by Italians.  Fast-forward to the early 1950s when there was a major fad for accordion playing, perhaps due to the popularity of the Lawrence Welk Show on television beginning in 1951.  Accordion manufacturers in Italy (and elsewhere) ramped up production and accordion distributors and music studios proliferated throughout the U.S., including the LoDuca Brothers in Milwaukee, Wisconsin, which became the exclusive American distributor of Pigini-made accordions. 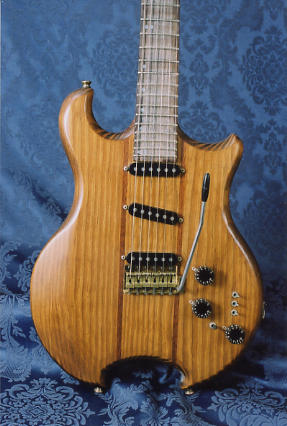 At its peak, the LoDucas operated a whole chain of music studios and had large orchestras of youngsters all playing squeezeboxes.  Alas, the fad was short-lived, as fads often are, and by the mid-1950s the bottom had dropped out of the accordion market.  What to do?  It was hard times for both manufacturers and importers.

After a number of false starts, the situation was solved by the Folk Revival of the late 1950s, when the next fad—this time for acoustic guitars—began.   Many of the Italian (and other) accordion makers began to add guitar production (or began sourcing guitars from guitar specialty houses).  This included Oliviero Pigini, who began making acoustic guitars carrying the EKO brand name.

The LoDuca Brothers, who had a relationship with Sears, Roebuck and Co. just down the road in Chicago began selling EKO acoustics to the big catalog retailer.  EKO guitars were on their way.  Electrics debuted around 1963, those nifty plastic-covered jobs.  Accordion makers, after all, were pretty skilled at wrapping plastic over their products.

EKO guitars had a pretty good run in the U.S. during the 1960s until the Japanese challenge began to triumph by around 1968 or so.  To be honest, demand for guitars in general began to fall off by that time, and rising European wages began to make their guitars more expensive, increasingly favoring Japanese products.  Plus, Pigini, who loved fast sports cars, got himself killed in an accident about this time.  EKO guitars were pretty much out of the scene by the 1970s.

I wasn’t really aware of EKO guitars during the 1960s until I met my wife, who had been conned into buying an acoustic EKO.  It was totally unplayable with a thick polyurethane finish and about ¾” action.  I did what I could to help, but there was no way, given my admittedly uneducated luthier skills at the time.  EKO guitars didn’t exactly get off on the right foot with me. 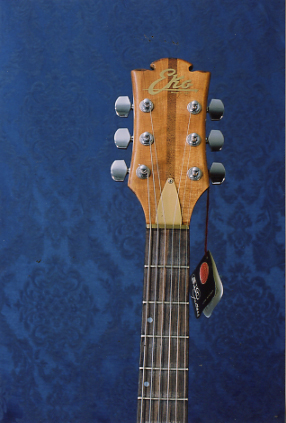 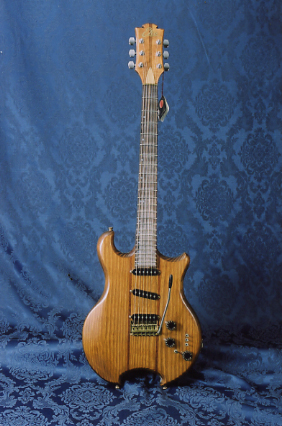 Fast-forward again and I became a guitar historian, met some of the LoDuca clan, and acquired a number of cool EKO electrics.  They were better than my wife’s acoustic, but had their share of problems.  Sixties relics.

Then I walked into Bennie Cintioli’s shop in the 1990s.  Cintioli’s was a major local music store back when such things were locally owned, not part of a national Guitar Center chain.  Cintioli’s had been there forever and I pulled many a treasure out of its unsold basement hoards.

I don’t recall how I first encountered the EKO, but I think they had discovered it in the basement and put it out on the counter as a curiosity.  I took one look and it was a no-brainer.  But what was it?

Turns out that EKO had gotten into the “copy” scene during the 1970s, but most of their guitars were sold in Europe and elsewhere, but not the U.S.  By the end of the 1970s they had become mainly a small “custom shop,” taking small orders from small-scale importers.  Including Benny.

I don’t think the guitars Benny Cintioli imported were designed by him.  More like he picked a few models to sell at his shop.  These included this EKO CX-7 Artist/T that was made in 1982.  I love the dark-stained pine body and set-in neck.  The brass nut, 2-octave fingerboard, and DiMarzio humbuckers were typical for the time.  This was made just as locking vibratos were coming on the market, but didn’t have one yet.  This is extremely light-weight and a really hot guitar, not at all what you’d expect from and EKO.

Shortly after this guitar was imported by Cintioli’s the craze for weird-shaped metal guitars and then SuperStrats began.  These cool EKOs were obsolete, and Benny had an unsold supply in the basement.  Right after this guitar appeared, EKO went bankrupt and that was the end of the story.  To the end, EKO was the stuff of garage band dreams!