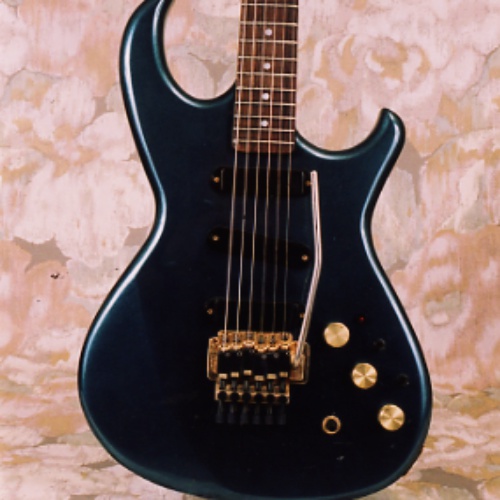 The 1984 Aria Pro II RS Series Rev Sound RS-E is much more than a Strat lookalike. Guest blogger Michael Wright explains why he loves this rare and very special model…

Most guitars first speak to me as visual works of art.  The color, the shape, or some sort of unique design.  Or it might be an interesting, obscure brand.  Rarely has the sound of the guitar been the calling card, but that was the case with this 1984 Aria Pro II RS Series Rev-Sound RS-Esprit.  (Don’tcha love those long names!)

Actually, when you look at the RS-Esprit, it has remarkable elegant lines.  It’s got a down-sized body that’s obviously Strat-style, but svelt, balanced, modern.  No doubt the color caused this flower to shrink somewhat.  When you look closely, the metallic greenish turquoise color (officially “Phantom Blue”) is pretty nifty, but across a room, it looks kind of “blah.”  The black pickups disappear into the shadows.  Still, there was something about this guitar that drew me to it.

Now, when the attraction of a guitar is primarily visual, I usually don’t care what the sound is going to be like.  After all, when you factor in an amp and effects, you can make any guitar sound like whatever you want as long as the electronics work.  But for some reason this guitar wanted me to plug it in.  I’m not sure what the “Rev” in Rev Sound is supposed to mean, but if it’s “reverse,” that sure makes sense!  This guitar lives in that out-of-phase world of between the pickups on a Fender Stratocaster.  This guitar is all about shades of twang!  I don’t know about you, but for me those in-between positions are why I’d play a Stratocaster.  I know I’m not alone on that one.  This guitar sounds out-of-phase in single-coil mode, and is still slightly funky in humbucker mode. 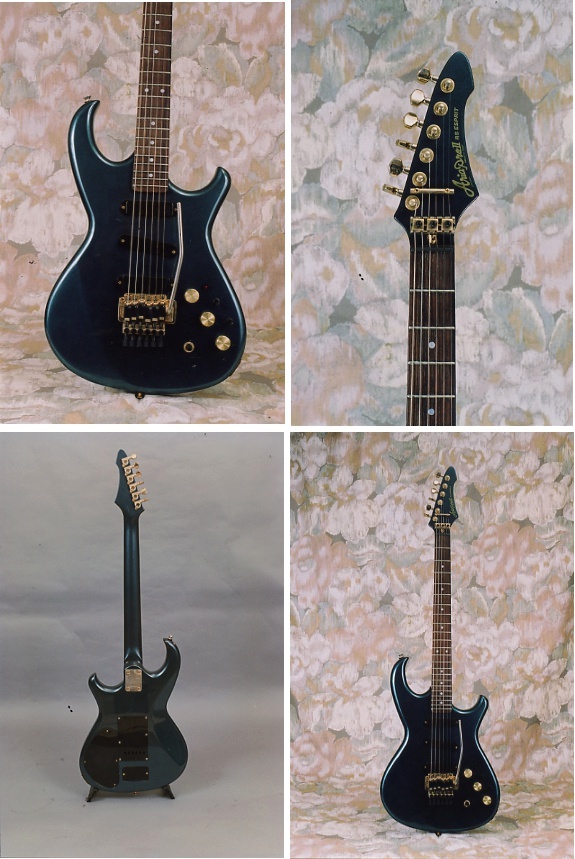 The existence of the Aria Pro II Rev-Sounds derives from the conclusion of the “Copy Era” of the 1970s.  By around 1968-69 Japanese guitar-makers had hit on a strategy of making less-expensive copies of popular American guitar models as a way of increasing market share in the U.S.  It worked like a charm.  By the mid-1970s American manufacturers—especially Gibson—were annoyed, to understate the issue.  In 1977, Norlin (the parent of Gibson) filed suit against Elger Guitars (the American subsidiary of Hoshino/Ibanez) in Philadelphia Federal Court claiming “trademark infringement” over headstock shape copying.  Nevermind that Ibanez had changed its heads in 1976.  Japanese makers agreed to cease and desist and in 1978 a new breed of Japanese electric guitars began to appear.  In many ways the cure was worse than the disease, because the new Japanese guitars were original designs built even better, and they continued to grab even more market share than before.  Think Ibanez Studio and Musician guitars.

Aria, which had originally initiated the “Copy Era,” lagged slightly behind, but in 1979 introduced a slew of new electric guitar series, including the unique Rev-Sounds, the 850 and 750.  The idea behind the Rev-Sounds was to use 3 single coil pickups, but with only the front and back hot, the center being a “dummy” coil that could be switched into active status to go from “single-coil” to “humbucker.”  The initial Rev-Sounds were sort of frumpy takes on Ibanez’s Musicians, a little more pointy.  The RS-850 was active while the RS-750 was a passive version.

The RS-Esprit was a much trimmed down version of the active RS-850 that debuted in 1984.  This has an alder body with a bolt-on neck featuring a “smooth joint” heel, a sort of clumsy compromise between a regular heel and the “heelless” designs of guitars like B.C. Rich.  The controls are a 3-say switch with two mini-toggles that activate the center dummy pickup in humbucker mode for front and back.  The knobs are master volume and two tones.  There’s also a little red light to indicate that your battery is still working.  The Act 3 locking vibrato system was similar to some Kahler systems that didn’t make you clip off the ball-end to load the strings.

I’ve always thought these were made by Matsumoku—in which Aria had a financial interest and which made numerous Aria guitars—however, I’m not so sure any more.  It certainly has a Matsumoku feel.  However, as a Trading Company, Aria had other factories from which to source its guitars.  This very well could have been made by another factory.

In any case, this is a really fun guitar to play, with a fully professional feel.  It’s not the most versatile guitar, but then with an amp and effects…  I don’t know if the RS-Esprit is particularly rare, but these were made for little over a year at a time when Japanese guitars were still imported in relatively small lots.  You rarely see these come up for sale, and I’m inclined to think they are.  These were made just before Japanese guitars came out from the shadow of post-World-War-II disdain.

Between new guitars and vintage guitars, guitar players have a gazillion choices these days.  But there are unique, fascinating guitars out there like the Aria Pro II RS-Esprit worth seeking out.  I’ve always been glad I heard this guitar’s siren call.