The writhing, brightly colored paper dragons carried by a line of athletic young men to celebrate Chinese New Year is a sight most of us have seen. If you don’t live in a city with a Chinatown, you’ve at least seen them in a Stephen Segal movie. And if you’ve ever entered a Chinese gift shop, you’ve seen the gift boxes inlaid with colorful pearl and abalone dragons. The dragon is one of the most powerful images associated with East Asia. So, imagine my surprise when I first came upon a Cort Strat copy inlaid with a most spectacular mother-of-pearl and abalone dragon! What had I found?

Well, it’s always best to go to the source when you have a mystery (if you can), so I called Jack Westheimer to get the true story about my find. Jack’s name, unlike Leo or Orville, is probably not on most guitar fan’s lips, but he brought us Teisco (and other brand) guitars from Japan at a time when most folks in America didn’t think much about products from the Orient. There’s a whole lot more to this story that we don’t have time to get into here, but, long story short, Jack transferred from pioneering guitars in Japan to pioneering guitars in Korea. He took his Japanese Cortez guitars to the Peninsula in 1973, partnering with Yung H. Park, to create Cort guitars. Today they are one of the world’s top guitarmakers, and many Cort guitars are quite simply excellent instruments.

However, as you might expect, this quality achievement did not happen overnight. By Westheimer’s own assessment, it wasn’t until the mid-1980s that they felt quality was at a competitive level. But how to show it? He needed a guitar to make an impact on the U.S. market. 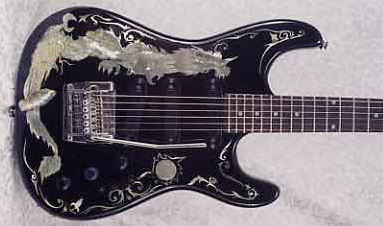 It was one day in around 1986 or ’87 while pondering this problem that Jack took a walk through an outdoor market that thrived outside the factory. There he encountered some of those gift boxes inlaid with fabulous pearl and abalone dragons. Maybe this was just the ticket. After a few inquiries he learned that the inlay work was done by craftsmen on a small island. He decided to take some Cort Strat and Explorer copies and have them inlaid with dragons. 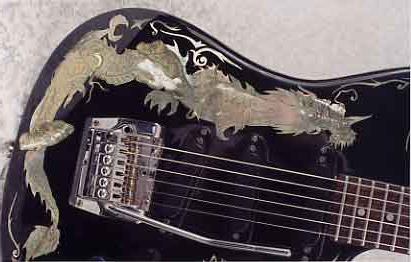 What do they say about the litter on the road to success? Despite his best intentions, the project was doomed. The cost of the inlay was reasonable, but Cort had to finish the bodies, carefully pack them up, ship them to the village where the work was done, then have them shipped back, touch up any dings, then proceed to clear-coat and complete the guitar. By the time you added up all the extra handling, the guitars had to be sold for a pretty penny once they arrived Stateside. Dealers wouldn’t pay the freight for a Korean guitar, no matter how fancy.

Their loss was my gain. This is a swell little guitar with neck-through construction (my favorite) and even if it didn’t play well, which it does, it would be fun to stare at all day!

The Cort Dragons are pretty rare, uh, dragons. About 400 Explorers and 100 Strats (StoStats) were built in 1987. Most were Corts, but some came labeled Lotus. Of those, most were made with laminated bodies like this one; only 50 were made of solid timbers toward the end of the run.

In the long run, it only took time, consistency – and a mature global economy – to secure Cort’s reputation. They didn’t need the Dragons. But this one, at least, ended up in my treasure hoard, and every time I open the case it’s like Chinese New Year to me!