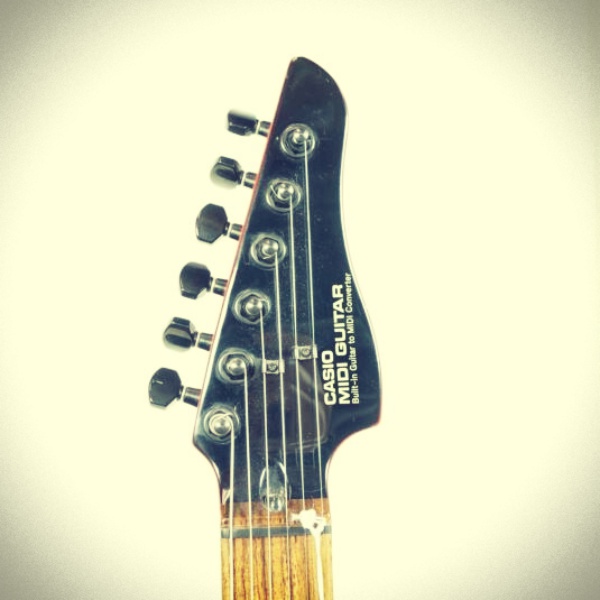 Casio. Not a name you’d expect to find on a guitar’s headstock. But yes it’s true – they did have a go at guitar manufacturing, and guest blogger Michael Wright tells us more about the Casio MG-500 MIDI Guitar!

Back in the mid-1970s guitar players got a bad scare from Disco.  Hard rock had ruled the roost in the early ‘70s, but what had been a fairly monolithic music industry began to show signs of fracturing.  In terms of guitar playing, two anti-guitar factions emerged.  For those who wanted to be a rock star but didn’t want to bother honing chops there was punk.  Learn a few chords and bash away.  At least they were still playing guitars!  On the other side was the disco crowd.  Don a sequined costume and dance the night away to music based on the lush orchestration and insistent groove of keyboard synthesizers.

The guitar press began to get worried and doom-sayers predicted the demise of the guitar.  We know that didn’t happen, of course, but it was a frightening period for guitar fanatics.  One approach to answering the problem was the synthesizer industry (if you can call it that) itself: put synth controller electronics into guitars.  The Roland GR-500 of 1978 was the first such attempt, a nice Ibanez-Musician-style guitar made by Fujigen Gakki with Roland synth controls that plugged into a large console that converted the analog signal into MIDI signals that then activated tone generators on the console and any external synthesizer machines connected to it.

As you might be guessing from my explanation of MIDI above, I’m part of that generation that started out writing on typewriters and had to trade them in for a computer keyboard.  I tried, but I never really got guitar MIDI technology. I played around a little with the Roland gear, which was OK because the converters had tone generating filters built in, so you could get weird squeaky tones, but I never knew what to use them for.  As for coordinating between multiple synthesizer machines, that was way beyond my pay grade.

Nevertheless, I thought I might be seduced by the dark side and picked up interesting guitar MIDI gear whenever it came my way, including this Casio MG-500 MIDI Guitar.  If you’re close to my age you knew Casio as the major purveyor of digital watches and calculators.  If you’re young you might not know that there were ever anything other than digital watches and you probably don’t know what a calculator is because all that is done for you on your phone.

Anyhow, Casio got into the synthesizer business with a whole range of keyboard synths that ranged from novelty small consumer-electronics keyboards with a few pre-programmed sounds (“piano,” “saxophone,” etc.) to fully professional units.  During the 1980s, toward the end of the synth guitar debacle, Casio introduced a number of very interesting guitars.  One was a sort of toy version with a touch-sensitive fingerboard and plastic strings, programmed sounds, and even a built-in amp and speaker, though you could output the sound to a real amp.  The other was this guitar, which was a serious attempt at making a MIDI guitar controller.

Like the Roland (and Ibanez) attempts at making a guitar synth, the Casio electronics were mounted on a guitar made by Fujigen.  While the first Roland guitar synths were put on a “normal” guitar, the concept quickly evolved that a guitar synth should feature an “exotic” shape.  To be fair, guitars moving into the 1980s favored unconventional guitar shapes.  “New Wave” guitarists like Andy Summers of the Police championed the minimalist Steinberger, while Heavy Metal bands liked Flying Vees, Explorers and even more “non-Spanish” shapes.  So if you were going to be controlling whooshes and chinkles, you needed a guitar that didn’t look like a conventional guitar.

The 1988 Casio MG-500 was very similar to guitars made for Roland and Ibanez.  It was basically like a Strat with all the extraneous wood shaved off.  It had a humbucker and two single-coil pickups like most contemporary “Superstrats.”  It had a “traditional” vibrato.  One of the early problems of guitar synths was that guitarists liked to use the wang bar but MIDI signals had to be precise.  By the time of the MG-500 this technical limitation had been solved.  The MG-500 was the first guitar synth to put the MIDI converter right on the guitar.  You could choose to play just regular guitar, just MIDI, or blend the two, or add in an octave line.  It had a regular 1/4-inch jack and a 5-pin MIDI jack.

The Casio MG-500 was a mind-boggling feat of electronic engineering.  That a guitar could have this sort of functionality is astounding.

Well, it turns out I wasn’t so unusual in being befuddled by MIDI technology.  A fiveway switch and a few mini-toggles turn out to be about our limit.  There was almost no market for MIDI guitars.  The Casio MG-500 was one of the last MIDI guitars to be produced. Roland continued to make aftermarket MIDI convertors you could mount on your guitar, and, for a time, Fender produced some special-order Strats so equipped.  But Disco was long-gone by this time, and the Seattle Sound and Pearl Jam were just around the corner.  While they eschewed heavy metal solos, they did play guitars and there was no reason to be scared.

As I write these words, guitars are under threat again.  “Pop music” is dominated by producer-assembled “beats” and singers sound good through the application of digital auto-tuners.  Maybe it’s a good thing that I’m ready with my MIDI guitars…  No, I don’t think so.