Back in the early 1990s I did a few “guitar shows” for my son’s primary school classes, basically a show-n-tell with half a dozen guitars in various shapes and colors.  I’d conclude with “Swamp Thing,” the then-popular TV show theme adaptation of the Troggs’ classic. 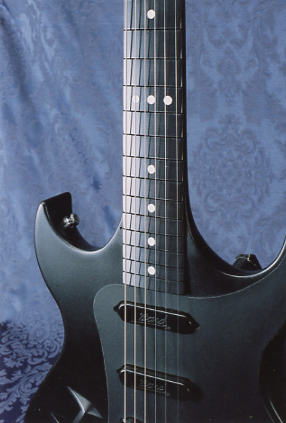 At the end, I’d ask the kids which was their favorite guitar.  The verdict would vary except one of the finalists always included the Bond Electraglide.  Dead cool black carbon graphite and LEDs.

Yeah, man, LEDs!  I confess I was probably drawn to the Bond for much the same reasons as those kids!  I mean, what’s not to like about a unibody molded carbon graphite guitar with pressure switches read on LED displays and without frets.

Rewind that.  “Without frets?”  Curiouser and curiouser.

The Bond Electraglide was one of those weird bursts of genius in guitar history that turned into a weird bust.  The Bond in question was a Scotsman named Andrew Bond.  Bond’s original idea was for the fretless fingerboard, which he dubbed a “pitchboard.”  In a Guitar Player product review at the time we learn that Bond originally put one on an acoustic guitar way back in 1972.  For me the pitchboard is the most troublesome feature of the Bond.  Instead of inlaid metal frets, the pitchboard consists of a succession of triangular structures where the angle point serves as the tonal point of contact with the string.  Or the “fret.”  The theory is that this greatly reduces friction and thereby increases your playing speed, I think.  The feel of this design is sort of like a scalloped fingerboard.  My problem when I try to play one of these is that for some reason I have trouble navigating.  I keep overshooting the note I’m aiming for because I don’t feel the metal fret.  Maybe it’s just me.

Well it probably wasn’t just me, because, as you probably know, the Bond Electraglide didn’t take the guitar world by storm.  But then there are those LEDs.  The electronic controls on the Electraglide were designed by one Dave Siddeley.  Basically, those three rocker switches are on-offs for the three pickups, color coded red, yellow and green.  The bridge and neck pickups are humbuckers, with the middle unit being a single-coil.  The top three push-buttons on that five-button assembly are for volume, bass, and treble.  To set the level you hold them down to set from 0 to 10.  The two lower buttons switch the humbuckers in and out of phase.  Now, let’s review.  There will be a test. 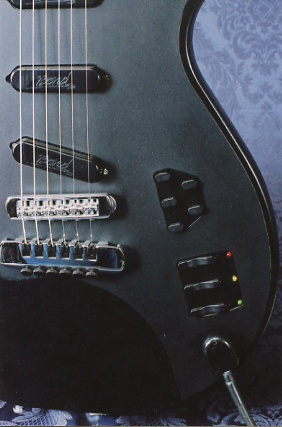 One other person involved with the Bond was Dave Stewart, guitarist with the Scottish duo The Eurythmics.  The guitar does have a look that went with that band’s sort of disco-y, high-tech, New Wavey style.  The Bonds were made in Scotland and distributed in the U.S. by Unicord, the company that did the Univox brand back in the day.  The Bond Electraglide was introduced in 1984 and dropped by the wayside in 1986.  They were pretty pricey, with a list price of $1,195 for a stoptail, $1,295 for a vibrato version.  They came with a transformer box, locking strap, and hardshell case. 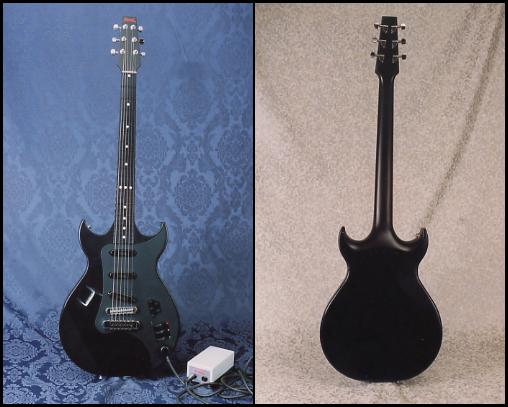 The Bond Electraglide provides a great example of how you can overthink things when it comes to guitars.  Guitar players are notoriously conservative blokes.  Give us a threeway switch and a couple knobs.  For the more adventuresome, make it a fiveway!

Then again, those primary school kids who rocked out to “Swamp Thing” are part of the generation that today walks around with its nose in a cell phone, texting and driving.  There was a reason they always picked it as one of their favorites.  Maybe the Bond Electraglide was just way ahead of its time.  Maybe if we added a detachable cell phone to work the controls the Bond Electraglide the next big thing, complete with a dead cool black carbon graphite unibody and brightly colored LEDs.  It’d make your heart sing, it’d make everything…groovy.