I’m a musician living in Los Angeles. One afternoon, I stopped to have lunch at an outside café on Sunset Boulevard with tables so close together that they touch. I sat down next to an old guy and ordered a sandwich.

A group of people immediately came up and asked the guy for his autograph. I didn’t recognize him, so I assumed he was a TV actor. People are always fussing over actors I don’t recognize. (I haven’t watched TV since I was a kid, so I’m often off the grid when it comes to pop culture.)

I forgot about the guy for a couple of minutes. My mind was on a song I was writing, and I was replaying a riff over and over in my head so I’d remember it when I got home. But I couldn’t ignore the guy for long, because more and more people kept stopping for autographs. He was cheery and kind to everyone, even though they were interrupting his meal.

It’s gauche to ask for autographs in L.A., and it struck me as odd just how many people were doing it. I glanced over a couple of times, and the guy smiled at me, but I didn’t say anything, because I didn’t want to intrude on his space.

Halfway through lunch, I hit on a really great ending for my song. I grabbed my cell phone, planning to go into the restroom and record it before I forgot it. I stood up and accidentally dropped my phone on the famous guy. I apologized and explained that I was going to the restroom to record a song. I realized that this probably sounded weird, but the guy didn’t seem to think so. I remember exactly what he said. He looked at me and said, “Is that so?” with so much interest and friendliness that it made me grin.

I squinted at him for a few seconds, wracking my brain to figure out who the heck he was. It occurred to me then that he might be a musician instead of an actor. I rarely know what musicians look like, even if I love their music. I recently saw a DVD of Led Zeppelin for the first time, and was shocked that Robert Plant was blond and flamboyant. I’d always imagined him dark, brooding and serious, and this new image gave me a mind-spin. The same thing happened the first time I went to a Neil Young concert. I was devastated that this geek with hideous mutton chops was the force behind the most brilliant, haunting music I’ve ever heard. My romantic fantasies were crushed, but it was still the best show I’ve ever seen. Neil Young in concert is f*#*ing awesome.

Anyway, I went to the bathroom and called my home number and sang the ending of my song to my machine. I recorded it a couple of times, to make sure I got all the nuances. When I came out of the bathroom, I asked the waitress if she knew who the famous guy was, and she squealed, “George Harrison, you idiot!”

George HARRISON!!?? My heart lurched to my throat. George Harrison was my HERO!

OK, so he’s everybody’s hero, but you’ve got to understand, I’m a sitar player. The sitar is the love of my life – I love it more than my computer, more than my ’62 Telecaster, maybe even more than my orange tomcat who brings dead things into the house all the time. 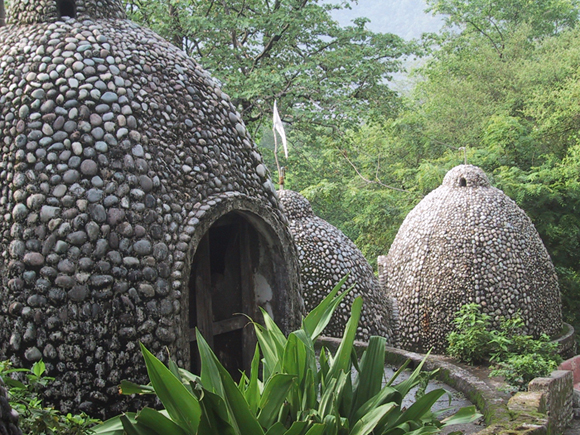 I bolted back outside with a smile splitting my face open. There were so many things to talk to him about! I spend a lot of time in Rishikesh, India, which is where the Beatles stayed when they were there. The Maharishi’s ashram is abandoned now, and totally overgrown by jungle. When I’m in India, I trek in there every day and sit on the roof of the house the Beatles built. (It’s the only house on the property. The rest of the buildings are little beehive- shaped meditation huts.) The roof overlooks the Ganges River, and I sit there and play sitar and watch the mist float across the mountains and the monkeys swing in from the jungle. It’s a magical spot – truly beyond description — and it’s easy to see how the Beatles wrote so much incredible music there.

I wondered if George had ever been to the secret caves in Rishikesh or discovered the hidden, white sand beaches down the river. I was curious whether he’d ever encountered wild elephants, and if he fed the big, jungle apes like I do. 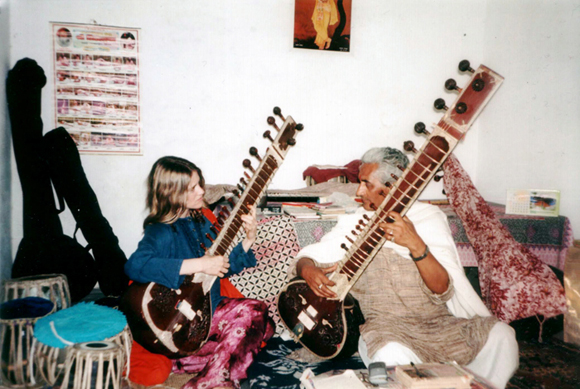 Also, I was bursting with sitar questions to ask him. I wondered which tunings he used and if he ever installed pickups. I wondered how he dealt with the feedback problems sitars have when miked. (“Real” sitar people won’t even discuss the idea of pick-ups. Sitar is meant to be played acoustically. Playing rock and roll with electric instruments, as I do, is an apostasy.)

I even had the wild thought that I could invite George over to my house to play my new custom-made sitar. Maybe he would even sign it! That would be so unbelievably cool! Or if he didn’t want to go to my house, maybe he’d wait for me to bring my sitar back to the café.

I abandoned all pretenses and ran right up to his chair…but he was gone! I looked up and down the sidewalk, but he wasn’t there. I sprinted down the steps to check out the parking lot behind the restaurant, but again – nobody. He must have parked in front of the restaurant and driven off while I was in the bathroom.

I felt ill…literally ill! How could he have done this to me? I love his music so much, and I admire what he stood for and who he’d become.

Now that he was gone, his face retroactively snapped into recognition. The only Beatles pictures I’d ever seen were from the 60s and 70s, but now I put that young face together with the older one, and can’t imagine how I didn’t recognize him …especially with the BRITISH ACCENT and the AUTOGRAPH HOUNDS!!! The waitress was right — how STUPID could I BE???

As I drove home, I consoled myself with the thought that I still might meet him someday. Sitar players have a way of finding each other. People have introduced me to a couple of India’s giants — there was a good chance I would run into George someday.

Lesson learned. If I ever run into Neil Young, I’m gonna tackle him first and make apologies later.