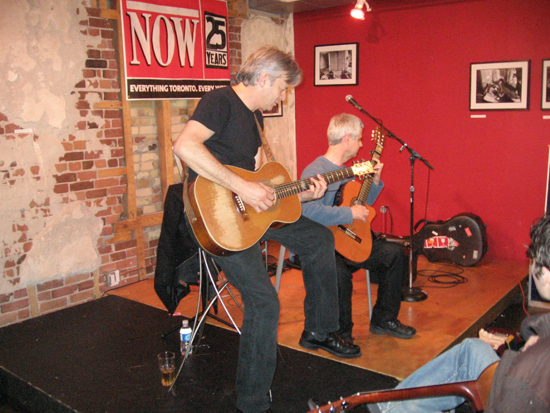 I guess I’m a typical guitarist. When I’m watching one of my favourite players I used to dream about one day being up there sharing the stage with one of my heroes. Well that dream came true for me a few years ago when I was invited up on stage by Tommy Emmanuel.

Now don’t be too impressed yet – this wasn’t a “moment of discovery” where record producers and agents saw me and made me an overnight sensation. Tommy was in Toronto doing one of his pre-concert workshops and I was in the audience. He usually ends by asking volunteers to come up and play a song with him. I sat there sweating while friends got up and played, wondering if I would actually have the nerve to do it. Then I impulsively threw up my hand and before I could chicken out I was sitting on stage with one of my greatest guitar heroes.

This was a moment I had dreamed about for years, and I wasn’t really unprepared. I had been practising one of my favourite Chet Atkins tunes ‘All Thumbs‘ and thought that it would be perfect since Tommy was such a huge Chet fan and knew every one of his songs (or so I thought). So when he asked me what song I wanted to play and I said All Thumbs, imagine my shock when he said: “Oh, I don’t know that one! I’ll have to fake it. You can start.”

Gulp! I took a few deep breaths to calm down before starting, but as I did Tommy addressed the audience. “This one is really hard,” he said to the crowd, “REALLY, REALLY hard!” Just what I didn’t need to hear. Then he turned to me and said: “Go!” One more deep breath and to my amazement my fingers began playing the song, and Tommy joined right in.

It all went well right up to the last few bars. That’s the trickiest part in the song, because Chet plays one of his patented cascades of sixteenth-notes all across the strings, and it had been hit-and-miss almost up to that very day. I was dreading the spot, and sure enough when I got to it, my fingers failed and I stopped. Ouch!

There was a sort of gasp from the audience and Tommy whispered to me: “Keep going! Don’t stop!” But it was too late – I HAD stopped. So I looked up at him with a grin and said: “Wait for it” and to my own (and everyone else’s) amazement I ripped off the cascade perfectly and ended the song. Tommy let out a whoop, jumped up and gave me a huge hug. With his arm still around me he turned to the audience and said: “THAT is how you play All Thumbs!”

I have never been so nervous playing in my life, nor have I been so proud on stage as that day. So do I still dream of doing it again? No way! That one performance was a pinnacle that I doubt I could reach again. And besides, it turns out that it did give me my little niche in posterity after all.

A couple of months later I was at the Chet Atkins Appreciation Society convention in Nashville talking with a group of the guys from Toronto. Tommy recognized us and came over to chat and reminisce about his recent visit. I was to his side and slightly behind him, and was shocked but very pleased to hear him say: “Hey, remember that crazy doctor who got up on stage with me and played All Thumbs? How amazing was that?!”

One thought on “Be Careful What You Wish For – You May End Up On Stage With Tommy Emmanuel!”