Mike Robinson, president of Eastwood Guitars, once again came to the aid of a band in need.

When Squeeze were coming through Toronto this August, Mike talked with the singer/songwriter Chris Difford, and found out that their two Eastwood guitars went missing. So Mike arranged to replace their guitars free of charge.

After the sold out show at Koolhouse, Mike Robinson presented Chris Difford with a beautiful Airline 3P DLX and handed Glenn Tilbrook an Eastwood Wandre DLX. The smiling British song writing duo were elated by his generosity. 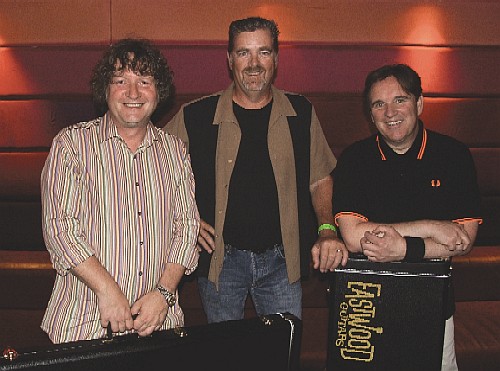 “When we found out that an amazing band like Squeeze had been swindled out of their guitars, we just had to put it straight. Talent like Difford and Tilbrook deserves great guitars” stated Robinson.

Eastwood is developing a reputation for coming to the aid of musicians. Last summer when Robyn Hitchcock had his guitar stolen in Montreal, Eastwood open their Georgetown, Ontario showroom to him where he selected his new main guitar, as he calls it his “Slinky Blue Airline Twin Tone”.