It was late 1969 early 1970. I was 13 years old and had been learning guitar for about a year when I was given what I considered to be the key to a world of freedom. Mum & Dad said it was ok for me to setup my room in a shed inside Dad’s garage. The shed was the size of a small bedroom, about eight by ten in the old measurements. It was originally built from scraps of recycled building material from a 100 year old house and was initially used as a tool shed.

Why would anyone want to live in a garage? Well the answer was easy. Up until that point I was sharing a bedroom with my elder brother, who was learning drums. My brother is two years older, and at that time size and age counted when disputes occurred. We had bunk beds with slide out desk draws that met at the invisible but well defined halfway mark between our beds. Go over that mark and I’d find my possessions dumped on the bedroom floor.

There was one item that lived in the DMZ between our beds; a Crystal Radio Set Dad had made for us. I grew up with the music of the late 60’s penetrating my brain like a form of sleep learning. Years of POP music entering my subconscious head every night because more often than not I would fall asleep with the ear plug jammed in my ear. I remember so many songs from those years. Tunes like Telstar became engraved into my musical soul. It’s true, being exposed to POP Music at an early age can affect young guitar players for the rest of their life.

Dad’s garage was big enough to fit eight cars. My room, inside the garage, was big enough for the bunk bed and a chair and a set of drawers and my guitars. There was no room to swing a cat. I had two guitars at that time. My first guitar, a Maton F10 Classical guitar and an Electric Japanese Strat copy, an Esquire. I saw the Esquire in the shop window of a now long gone Melbourne music store named Sutton’s. I used to stare at it every Saturday, before and after my guitar lessons – until I had saved enough money to buy it. $79.00 well spent. I still have both guitars – 37 years later.

For about two years – I practiced in my room, the tool shed – using my Mum’s old Bakelite Radio as my practice amp for the Esquire. I had to practice in the room – because the guitar lead I had was only 5 feet long. By working as a delivery boy for a pharmacy – I was able to save up enough money to purchase my first real guitar amp [and a long coily cable guitar lead, which let me stand outside my room and in the Garage]. 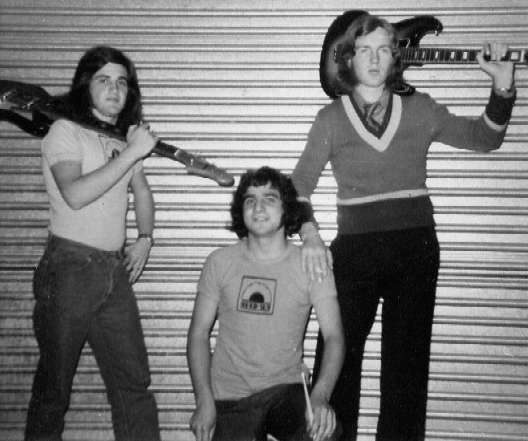 The day came when I went by train to pick up that first real amplifier – a Vox AC 30 from the famous Australian guitar Luthier, Merv Cargill.

All the way to Seaford and met Merv in his garage [I liked the fact that we both spent a lot of time in the garage involved with guitars], paid the huge sum of $250 [they’re worth 10 times that now] and then lugged the amp – by hand, back to the train station, then all the way home. My house was at least a couple of miles from the nearest train station. I can remember to this day the pain in my arms of hauling the amp by hand all the way home, we only had one car and Dad was at work. I was certain my arms had been stretched at least a couple of inches by the time I got home and wondered whether I had done any permanent damage.

We all know the smell that a new car has – guitar amps have a unique smell too – Tolex covering a wood cabinet, warmed by heat generated from valves. Turning on the Vox AC30 was almost a ritual, a religious experience. Knowing that what was about to happen was like expecting the arrival of the messiah’s voice box. Volume & TONE. Guitar & Amp. 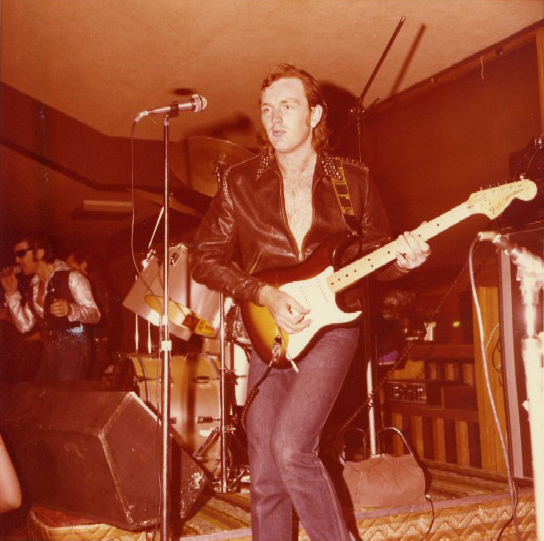 Teenage dreams fulfilled by the sound created by an electric guitar. Reverb. Tremolo. Guitarists know what this means. The ability to traverse all boundaries, to “go where no one has gone before” play an electric guitar – you’ll arrive at that place on the playing of the first note, in the relative comfort of your bedroom or as in my case my bedroom in the garage.

So there I stood, guitar in hand, my face turned to the opening of the garage – which, coincidentally for all the Led Zeppelin fans, looked to the West. There was no door on the garage. It was too big and Dad couldn’t afford a door so the gate on the property’s side fence was the barrier between me and the world outside. The gate was only five feet high, so anyone tall enough walking past could still see over.

To me – those passers by were my first audience. Whenever anyone walked past, I’d be sure to try and play something tuneful and not make any mistakes. Through many a summer’s day I played guitar from inside the garage and looked the West and pretended and believed that I was performing to an audience, from a stage. An amphitheatre filled the sound of an electric guitar and bathed in the sunbeams of the after school sunlight. I didn’t have to go to Church I was there every day. All I had to do was plug in, turn on and play guitar.

Often, I played like there was someone listening. Mostly, no one was. It was enlightening to find out that my neighbors, an Italian family directly across from the garage, was listening occasionally and the mother did make comment that they could hear me playing my tunes and how I sounded ok and seemed to be improving. Acceptance of my efforts I thought.

They had a daughter who I tried to impress with my playing but Italian girls, who had strict parents, were hard to impress safely with the sounds of a guitar in the early 70’s. This challenge to impress, to gain acceptance, made me strive to play even better.

I played like it was a live performance being recorded for posterity.

Everything was improvised – sounds, tones and composition were more important than playing note for note tunes of songs of the day. Creating a tonal landscape was the daily quest. Getting lost in the vibrations of sounds created was more significant than anything else at the time. 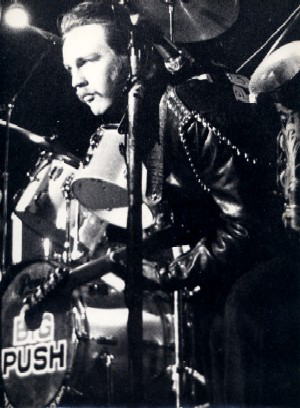 Teenagers spend most of there teenage years developing the personality traits that will guide what happens to them through young adulthood and even middle age and older. So for a teenage boy possessed by the sound that a guitar makes, a sound which to a teenager has some kind of magical powers that enhance the experience of growing up and finding his place in the world, playing guitar in that garage gave me the base from which many of my life’s experiences grew from.

Trying to re-create and emulate the sounds and songs of the guitarists and bands, popular at the time was important of course. If you played a popular riff or even strummed the chords of a popular song of the day, you became something other than a non-entity. Hero status might be carrying it a bit too far – but I did notice that the better I played those riffs the more localized fame I achieved. Girls noticed me if I played a song they liked. Boys were impressed if you played songs they liked. Go to a party and take your guitar, you were, for a brief part of the evening the centre of attention. How long depended on your repertoire of songs and how well you played them. By the time I was playing in a band regularly I had developed a reasonable list of tunes and could play most of the popular songs, so the guitar was good for improving social standing too!

Being a Garage Guitarist was the basis of this guitar player’s journey. I encourage all guitarists, beginners and advanced to enjoy some time in your own garage or someone else’s if you don’t have one. Play alone, play with fellow musicians – soak up the sounds and play every note like it was your finest performance to the audience just outside the door. Be inspired by whatever sounds you create. Write down the words, record the sounds. Who knows what may happen.

One thing is certain you will have created a lifetime experience that will give you wonderful guitar playing memories to re-visit as the years go by. The glory days are from today onwards so pick up your guitar and go play, live today, play today, start creating your yesterdays so you can relive these creations at the other end of life’s rainbow and look back like I do on those times spent as a Garage Guitarist.

Post by: Ian Carter
Ian is the owner of www.icguitars.com our “Dealer Down Under”
Copyright by Ian Carter 2006

One thought on “The Garage Guitarist: Ian Carter”