Just trying to help this guy out. Keep an eye out for his guitar. Maybe you can help reunite him with his lost love. 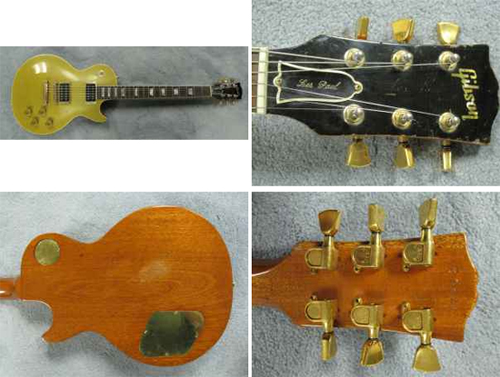 To the people who stole my Les Paul (Ladner/Tsawwassen)

To the people who stole most of my stuff out of my studio on June 5, including my main guitar of 43 years, let me tell you about it.

This is not a gold-top. In the 1950’s, it was refitted with an ABR-1 bridge and stop tailpiece, and then refinished, all by Gibson. The green colour in the picture, (especially on the rear half of the body where the light reflection is less), is accurate. It’s one of the lightest Gibson Les Pauls, and the only one of its’ colour, that I’ve ever seen.

I’ve made many other changes to this guitar in favour of playability:
–changed the P-90’s to humbuckers
–had the neck thinned and it, the back and the sides were refinished
–when it was refinished, the serial # was stamped in
–replaced worn out machine heads with gold Gibson ones
–added brass switch ring, jack plate, and rear cavity covers that were made for me by my now-deceased brother-in-law
–added a truss rod cover with “Les Paul” on it
–installed strap-locks (for obvious reasons)
–there will be traces of violin bow resin in and under various parts. It is the best guitar ever for bowing.

This is a one-of-a-kind instrument in so many ways. It is completely recognizable, down to every screw on it.

I’ve been in the music business all my life, and have a large list of friends and contacts. With the help of countless amazing people, many who I don’t even know, http://web.me.com/outgolfing/Equipment (which details what you took) has been sent across Canada and around the world to more people – musicians, music stores, pawn shops, studios, rehearsal rooms, and other musically related businesses – than I ever imagined possible. It’s been passed around since you broke in, and is continually going out to more people. In fact, I’d bet people reading this will pass the link on to others if they already haven’t. This will continue unendingly until I find my guitars and other equipment. My green Les Paul is already one of the most recognizable instruments in Canada, I can guarantee you that.

Here’s your scenario:
–No collector will want this instrument because it’s not even close to original.
–No legitimate business will buy it from you.
–Any creep who would knowingly buy a stolen guitar will give you a pittance for it.
–If you keep it for yourself, you’ll never be able to play anywhere with it, and it will tie you to the crime and to all of the other stolen equipment for as long as you have it.
–You didn’t even take the case.

It’s my most personal possession, and I have always planned for my son to have it one day. By the way, the other Mesa Boogie Dual Rectifier head you took was his.

It’s not of much value to you, but to me, I can’t buy another Les Paul like it because another one doesn’t exist.. Here’s a thought:

Have some decency and redeem some karma. Bring my guitar back. You’ve fucked my studio up and stolen a life-time collection of my shit. You stole my guitar rig, which was MY sound that I’ve spent years achieving.

You haven’t ripped off a money making business. You’ve ripped off my life and my spirit immeasurably by taking away the tools of the pursuit of my passion. I’ve worked extremely hard for my whole life to earn my right to do so, and you took it all away in an hour or two. You’ve also ripped off my son, now, and in the future. I don’t have the money to replace the gear, so it’s just gone.

Just give it back – NO QUESTIONS ASKED. PLEASE

4 thoughts on “To The People Who Stole My Les Paul”