No rare guitars or wacky amps in this month’s column, as I haven’t bought anything in a while. I’m still waiting for my own bailout for the bailout we’ve paid for a few times over before I can resume buying strange amps and guitars again. So, without further delay, the obligatory TOP 10 list for the end of the year. You’ll note that most of these things were not released in 2008, nor are there only 10 of them. There are 4 extra and the price is right. Peace, all.

1. Voices in my head.
This is not an album, but actual, annoying, mostly dissonant, sometimes resolving to melody and harmony, but mostly the clang of plates and the murmurs of distant conversations in my head. Mostly medicated, most recently, professionally (and with un-fun and responsible medicines…self-medicating is so much better, buzz-wise, except you could end up homeless, in jail, suicidal and welcoming death…otherwise, it’s the way to go) so. NOT RECOMMENDED. One star out of ten. For “Roberge complete-ists” only, of which there are, at last count and including me, exactly none on the planet. (Note that all of the following were listened to with #1 going on in the background, so your mileage may vary).

2. South San Gabriel’s WELCOME CONVALESCENCE (2003)
This has been in constant rotation since the year of its release. The quieter cousin to the other Will Johnson fronted Denton TX band, Centro-Matic, SSG is an incredible band. There’s not a dud on this album, and most are classics. The kind of album you start making a mixed CD for someone and you realized you, one-by-one, selected the whole damn record. 10 stars out of ten. Go buy it.

4. Jay Bennett’s THE MAGNIFICENT DEFEAT (2007)
Bennett shows his studio wizardry that made 1996-2001 Wilco so interesting, while supplying his own beautiful husky voice to a bunch of hook-laden wonderful songs that should please any fan who wants to hear what the bastard child of Elvis Costello and Tom Waits might sound like, given plenty of studio time and a Melotron and a rare dose of melodic genius. HIGHLY RECOMMENDED.

5. The Gamble’s Quail
I feed outside my back door every morning and sundown. Only for those in the Southwestern US desert. The rest of you, I’ll have to send you a field recording. They sound great.

6. Mike Martt TOMORROW SHINES BRIGHT (2003)
Full disclosure, he’s a pal. But I don’t hit the “repeat” button just because I love someone—they have to write damn good songs, too, and this little-known gem deserves a wider audience. Martt was the main songwriter in LA’s famous cow punks Tex & the Horseheads along with fronting the criminally under-known Low & Sweet Orchestra, along with handling guitar duties at various times for Thelonious Monster and The Gun Club. TSB is a beautiful record—from the opening Americana of “Fading out of Sight” to the rocking “That’s All Mine” to the beautiful and heartbreakingly honest “Wash”, this album should be on your shelf. Or in your PC. Or your I-pod, or wherever the hell it is you kids keep your music these days.

7. A mix of Roky Erickson
Plucked from various albums from the former front man of the legendary 13th Floor Elevators…While maybe too many of the solo-period originals (“Starry Eyes” “You Don’t Love Me Yet” and “For You” to name but a few) use and re-use the classic doo-wop I-VI-IV-V progression, Roky Erickson’s singling and phrasing makes each of them sound new and different. David Lodge says the job of the writer (and I would extend this to any artist) is to make “the strange familiar and the familiar strange.” Not many (Tom Waits?) can sit alone with an acoustic guitar and make you think you’ve never heard anything like it before. Listen to the phrasing on “For You” for instance and fall in love with the human voice as not just the thing that makes the words in pop music, but as an instrument. The man’s a genius singer.

8. Elliot Smith: “The Ballad of Big Nothing.”
A desert-island track for me, for sure. And while I could name most of his catalog for songs I’d want to keep, this one has all of it—the hooks, the wistful, heart-wrenching vocal phrasing, the off-beat catching up with the rhythm of the lyrics, and the lovely jangle of the droning, melodic guitar. What a song & performance.

9. Some new stuff
John Paul Keith and the 1, 4, 5’s “Looking for a Thrill.” Just a great single. I hit their myspace page once a day to hear that tune. It’s like the Replacements if Dave Edmunds produced them with Nick Lowe smoking behind the board. Check it out!

10. SOME more new music: The Mannequin Men’s FLESH ROT.
The Urinals played a show with these guys at the Bottom of the Hill and they BROUGHT it. One of the best young bands I’ve seen/heard in ages. Bring them to your town…and if they happen to be there, you should check them out. Snotty, tuneful, melodic and aggressive. The way rock should be, or at least one glorious facet of rock, which these guys bring in spades.

11. Why stop at ten?
I’ve been re-visiting Bob Dylan’s best (for me—my Bob Dylan is not your Bob Dylan, after all) period—spanning perhaps the most creative and mind-blowing two years in rick history by a recording artist—where from late 1964 (BRINGING IT ALL BACK HOME), early 65 (HIGHWAY 61 REVISITED) to 1966 (BLONDE ON BLONDE), the man was on fire. The outtakes from this period (“Please Crawl Out Your Window”, “Positively 4th Street” and various alternate takes from album cuts) would be better than most people’s albums of that or any time. From the half acoustic/electric of BRINGING IT, to the blistering and sublime high-water mark of HIGHWAY 61, to the mercury tingle of BLONDE, the man did no wrong for a sustained period of creativity and greatness unmatched (even by the Beatles and Stones) in the history of rock. And, shit, “Desolation Row” alone is worth ten desert island discs. Wow.

12. Steve Turner and His Bad Ideas: “A Beautiful Winter.”
File this in the “songs I wish I’d written” category. Just a lovely duet by Turner (of Mudhoney fame) with Holly Golightly…great lyric, melancholy vocal performance and a killer melody. Can’t be beat.

13. The Handsome Family: LIVE AT SCHUBA’S TAVERN
This is, criminally, (and I hope temporarily) out of print, but it’s one of the greatest live albums ever recorded by one of the best bands you’ll ever hear. Husband-wife team Brent and Rennie Sparks have produced some of the most incredible music of the last 15 years and you owe it to yourself to track this (and their other releases) down. Rennie Sparks may be the most creative and interesting lyricist working today (check any number of tracks for astounding evidence, but for starters, “Amelia Earhart Versus the Dancing Bear” “Winnebago Skeletons” “Drunk by Noon” or “Weightless Again”), and the songs are masterfully put together and anchored by Brent’s multi-instrument abilities and lovely deep voice. Imagine if Flannery O’Connor and John Ashbury started a band after listening to the Louvin Brothers and Hank Williams, but got even depressed and more tunefully southern Americana gothic. Actually, you CAN’T imagine how these two sound—go buy some. It’s music so good, you’ll want to annoy strangers on the subway, taking out your earphones and saying, “Damn, listen to this!”

Which seems like a good place to stop—damn, listen to this. Happy 2009, everyone. 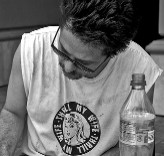