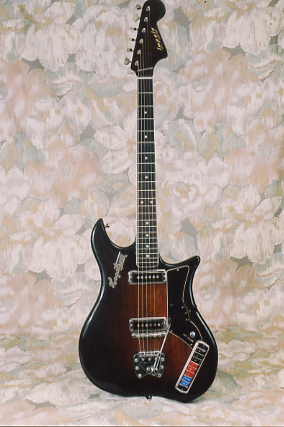 As with our old friend Nigel Tufnel, that more is better goes without saying.  Why play an amp at 10 when you could play at 11?  I’ve bought guitars just because they had 4 pickups.  And I’d for sure be interested in a guitar like this Hagstrom Impala with 8 push-button controls!  Count ‘em, 8! And color-coded!

I find it curious that Hagstrom isn’t better known or regarded by Stateside guitar enthusiasts.  I guess you can say that about most European guitar-makers.  But Hagstrom actually got pretty good distribution here.  Maybe even better than EKO, which somehow ends up being better known (although that’s probably more due to Dan Forte’s—aka Teisco Del Rey—writings than actual familiarity during the 1960s)  But Hagstroms were pretty well made and they actually were among the earliest European guitars to be imported after the War.  In the late ‘50s, with the rising popularity of Folk music, acoustic guitars from Scandinavia were the first imports, guitars made by Landola (Finland) and Bjarton (Sweden) came in as Goyas and Espanas.  In around 1959 those acoustic were followed by the first, short-lived electrics, those wonderful sparkle-plastic covered hollowbody electrics sold under the Goya brand name, made by Hagstrom in Sweden.

Finding a vegematic array of push-buttons on a Hagstrom shouldn’t come as a surprise.  Indeed, those early sparkles had push-buttons.  But when you consider that Hagstrom actually began in the 1930s as an accordion manufacturer.  Accordions have nothing if they don’t have buttons!  American manufacturers hit on the toggle switch early on, but European makers seem to have preferred push-button switching.  Then again, come to think of it, most European guitar-makers started out making accordions!  Except for many of the German makers.  Except for Hohner.

Anyhow, Hagstrom produced some pretty innovative and high quality instruments, although I think their reputation gets a bit tarred by those pretty flimsy vinyl-covered guitars that were their bread and butter through most of the 1960s.  But those early sparkles were pretty interesting.  They had modular pickup assemblies.  You just lifted one configuration out and plugged in a different one, although practically speaking that really only made sense if you were upgrading.  I can’t think of why you’d change out a 4-pickup unit for a 1-pickup unit, since all you had to do was just play one pickup on the 4-pickup configuration, but, hey, it makes for good marketing copy. 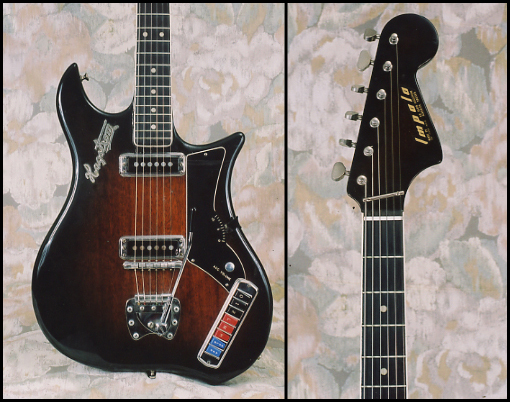 There were guitars like this Impala.  This was a very early neck-through-body guitar made long before that technique became fashionable.  The push-buttons were basically for a variety of tone controls.  The “0” was one of my favorite settings: “off.”  I never really understood why you want to turn your guitar off, but OK.  The 1 button activated the neck pickup, while 2 turned on the bridge unit.  Then there were 3 buttons  for Hi, Mid, and Low, sort of a quasi-EQ presumably with different capacitors.  The Solo button was full out, and Accompaniment was a muted setting for chording.  The sliding lever was a master volume for all the buttons except for knob which was a volume control for when you were in Accompaniment mode.  I love all those buttons but I may be loving a toggle switch more.  Even though the switching is a bit arcane, this is a high quality guitar with a pretty good amount of tonal versatility.

Guitars like the Impala weren’t Hagstrom’s only quality builds or technical innovations.  Later in the 1970s the company commissioned Jimmy D’Aquisto to design a jazz box (dubbed the Jimmy) and they also produced the very nice Swede, a sort of Les Paul-style axe, some of which came outfitted with a Patch 2000 interface pedal made by Ampeg, a pre-MIDI form of synth guitar that combined guitar switches with a foot pedal and was even harder to figure out than the Impala’s push-buttons.  But the Swede/Patch 2000 certainly earned them an A for effort.

Hagstrom, like most other European manufacturers couldn’t survive the Japanese juggernaut of the 1970s and they bit the dust in the early 1980s.  Their labor costs kept going up and up as Europe gradually recovered from the 20th Century’s hot wars and the political and economic turmoil of the Cold War.  But they did manage to make some significant—or at least some really interesting—contributions to guitar history.  Including guitars with lots of buttons.  Now, if this only had 9 buttons, Nigel would be a happy chappy…