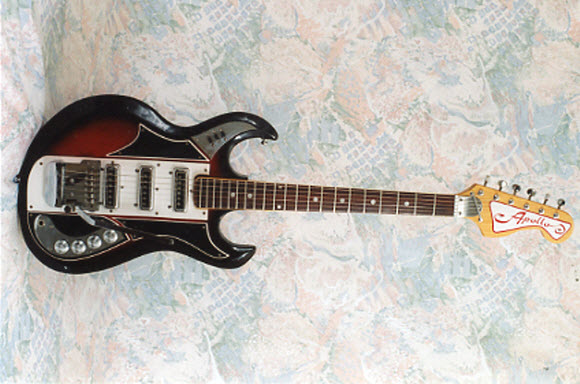 One cool thing about liking oddball old guitars is they always contain hope…and a challenge. By which I mean, no matter how obscure or exotic, you always live with hope that you’ll someday figure out what the heck they are and thrive on the challenge of trying to do so. At least that’s been my repeated experience over the last quarter century or so of playing guitar detective. 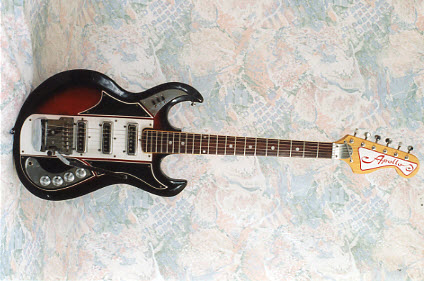 That being said, this Apollo Deluxe was kind of the exception that proved the rule, in that it followed a reverse pattern, sort of backing into discovery. While I didn’t really know what it was when I found it, I did have some idea of what it might be, or at least ought to be! I knew that the Grecian-god-themed Apollo brand was a part of the St. Louis Music (SLM) family of instruments, so all I had to do was locate it within the pantheon (SLM’s better-known brand was Electra, another Greek god).

St. Louis Music reflects one of those hazy back-stories in American (and actually international) guitar history that involve the murky world of distributors, which few people really understand. Distributors—or “jobbers”—were part of the middleman structure in the music business that bought instruments from the manufacturers (usually what we call “mass manufacturers,” like Kay or Harmony), marked them up, and got them to the music stores,department stores, and studios where they would be retailed to you and me. They’re the wringers because the guitars they bought might say Kay, but they might just as well say Cromwell or Custom Kraft. This latter was the brand used by SLM on guitars produced for them by Kay during the 1950s and ‘60s. 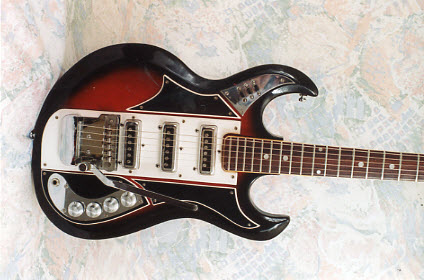 A roughly equivalent—though somewhat more Byzantine—business model developed in Japan following World War II. How much that was a result of American governorship would be an interesting subject to study. Guitar manufacturers—some of whom had been active before the War—sprang up, similar to a Kay or Harmony. They sold their products to “trading companies,” whose job was to distribute domestically and to interface with foreign importers, who would then either be a distributor in its own country, or sell to other distributors, or both. (To make things worse, the trading companies may or may not have owned an interest in the manufacturing companies; can you say CMI and Gibson?) You can see why sorting this all out is not always easy!

Japanese guitars made significant inroads into the American market as the 1960s progressed. And not coincidentally, American mass manufacturing declined accordingly, although I think this was more a combination of management stagnation and cultural chauvinism than anything else. The global economy was still emerging and Depression-era-trained managers didn’t get it. There’s very little difference (read “improvement”) between a 1962 and a 1967 Kay, Harmony, or Valco guitar. 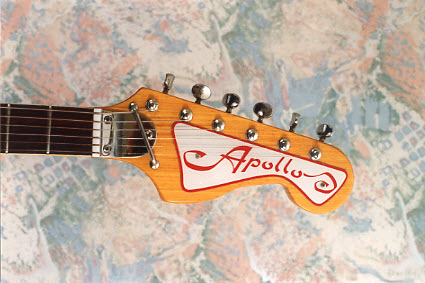 SLM had sourced guitars from Kay for a long time but it, too, was drawn to the Japanese makers. SLM was big enough to be important players in the music industry, big enough to see the writing on the wall. They may even have had inside information that all was not rosy at Kay, which was purchased by Seeburg in 1965 and then Valco in 1967. By 1968 both Valco and Kay had gone belly-up.

Anyhow, this model shows up in an undated SLM catalog probably from around 1967. Or at least a two-pickup version does, called the Deluxe 2235. Clearly this was inspired by—or actually meant to compete with—a Burns Bison. At that time the Japanese were copying the European guitars that had been the “budget” alternatives earlier in the ‘60s. Thus, this is an early “copy” guitar. If you’ve overcome the usual prejudices of many older guitar enthusiasts, you know that this is a pretty decent guitar, once it’s properly set up. Poor set-up was the common problem of the time for these guitars. Look, these pickups ain’t DiMarzios, the switching is kind of sucky, and Japanese wiring was really small gauge, so it may not survive well, but these have their own sound and are great fun.

Even though Kay went out of business in ’68, SLM continued to offer Custom Krafts until 1970. Whether or not those were left-over stock or assembled by SLM from parts is unknown. By 1968 they were already pretty dated designs in any case, so probably not selling well. The SLM Apollos were probably not imported in large quantities, based upon how many you see: not many!

SLM, of course, would go on to introduce The Electra guitar, a copy of the Ampeg Dan Armstrong Plexiglas guitar in 1970, and Electra would be their primary brand for electrics (Alvarez for acoustics) until 1984, and they would be a major force in the importation and distribution of guitars from Asia. This Apollo represents a fascinating clue in deciphering that process!