The Shaggs. Now there was a band that was baad! No, I’m not talking street slang where you’re supposed to flip over the meaning. They were bad. There may never have been a recorded rock band that was worse. Couldn’t sing, couldn’t play, the songs were awful, and they were terribly produced. There’s a CD of their two albums. Check them out for yourself. BAD! In fact, the only GOOD thing that came out of the Shaggs was a legendary guitar and bass, the Avalon “Shaggs” models!

The Shaggs was a family band, basically the idea of Austin Wiggin, Jr., a poor mill hand whose mother once read his palm and told him he’d have daughters some day and they would be part of a band. The Shaggs were the fulfillment of that prediction, sort of American primitive. Hailing from the small town of Fremont, New Hampshire, the Shaggs was made up of Wiggin’s daughters, Betty (16) on bass, Dorothy (Dot, 19) on guitar, respectively, and Helen (20) on drums. Young sister Rachel sometimes also performed. Dot wrote the lyrics and developed the melodies, while Betty pitched in on working out chords and rhythms. Their primary musical influences were Herman’s Hermits, Ricky Nelson, and Dino, Desi and Billy. Austin was manager and named the band. He got the matching instruments from somewhere and the band took lessons until they recorded their first album in 1969. The guitar and bass were Avalons. 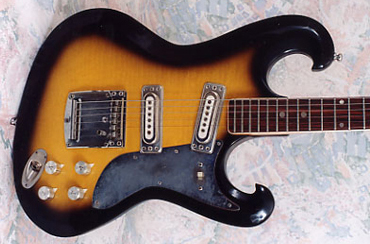 Now, these are known as Shaggs models because they’re what the Shaggs played, not because of some big corporate endorsement deal! No one knows who sold the Avalon brand. Mailorder? An area music store? An auto supply store? All possible. Nor who made them. Nothing like them shows up in the reference books. I’m not even sure when they were made, but 1967 or ’68 is a good guess. Japanese guitarmakers were competing with the Europeans early on in the 1960s and some of the earliest ‘copying’ was of European models. By the mid-’60s the EKO Violin guitar and bass, itself a copy of the Hofner made famous by Paul McCartney, was one of the most popular guitars to be honored with imitation. Another model that got imitated early on was the Burns Bison, with its long, pointy, inturned cutaway horns. The Avalon Shaggs were in the Bison mode. Come to think of it, buffaloes are kind of shaggy…

What can you say about the Avalon Shaggs that one look doesn’t explain. A cool shape, with maybe one of the greatest headstock designs ever, uh, conceived. We like to call the shape Goofy. Flamed maple top and back veneers (over plywood), done up in to-die-for black-to-yellow sunburst! Lots of chrome metal trim. I once claimed that the pickups on my Kent were the worst ever made. I lied. These little ceramic units are just as bad, if not worse! Making the fact that the Shaggs were even able to record with them at all is a miracle!

The Shaggs recorded a follow-up album in 1980, but that was the band’s last gasp. We don’t know what kind of guitars they used. Except for a (demented) cult following, these rare Avalons are all that’s left of their legacy. And they’re so bad, they’re positively baad. Know what I’m sayin’?