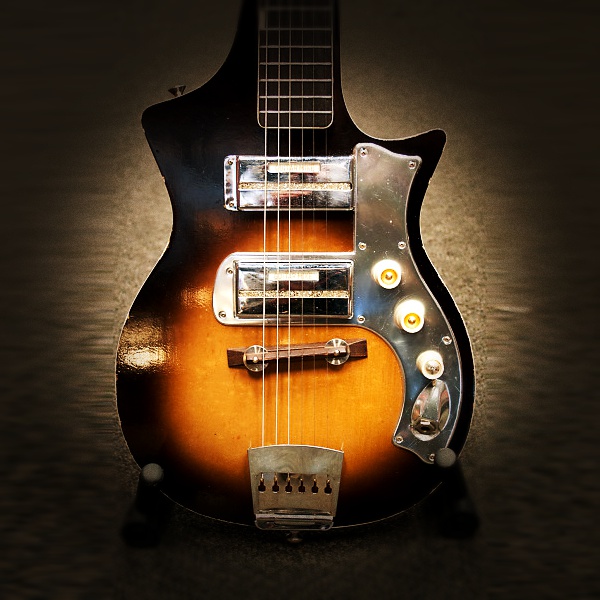 For many, many years—can you say “Still today?”—any electric guitar that smelled of being made in Japan (or not obviously American) was labeled as being “made by Teisco.”  This was the equivalent of the labelling of any mysterious American guitar—can you say “Still today?”—as being “made by Regal.”  I admit this intellectual disingenuousness was one of the strong motivators that propelled me into exploring the nooks and crannies of guitar history way back when.  Well, the guitar seen here really was made by Teisco, and very early on.

Thankfully these days there’s a lot more information available to anyone interested in finding out the Plain Truth about where their guitar came from thanks to the efforts of a few intrepid historians and (however much you might hate them) Google.  I made some preliminary contributions with my writing, and Japanese publications like Bizarre Guitars (you need a copy if you like this subject) and Frank Meyers’ recent work help make identifying Japanese guitars much easier, if not yet infallible.

To be honest, the subject is awfully complex.  Japanese guitar-makers were always allied with various Trading Companies, who were sort of the business bosses, often intertwined through marriages, etc.  Parts might be made by various suppliers within a network and go to different workshops, so things like pickups are not necessarily exclusive to a given brand (unlike, say, a Gibson PAF).  Plus, through the 1970s Japanese Trading Companies made guitars for domestic consumption using their own brand names (which may or may not have been the name of the shop that made it; eg, FujiGen Gakki made Fuji, Greco, and Ibanez guitars, among others) and made guitars for foreign customers either with a different brand name or a name owned by the importer/distributor (which may or may not identify the importing company!).  It’s enough to make your head swim (although it does provide a lot of work for amateur guitar historians). 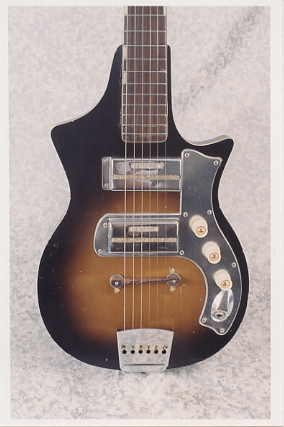 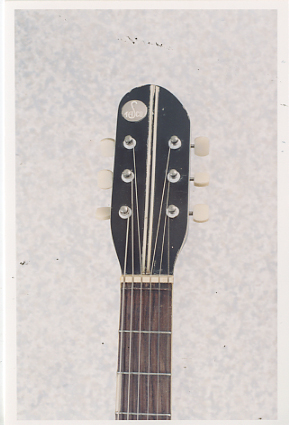 Teisco J-5 headstockTeisco was one of the rare Japanese brands that, like Gibson or Rickenbacker, reflected the factory that made the instruments and got exported with that badge.  To be sure, Teisco also made guitars with other names, as well.  But as far as I know, no Teisco guitars were made by anyone but Teisco, except for at the end when they were owned by Kawai and the Teisco plant was closed down in the early ‘70s.  Like I said, it’s complicated!

It gets worse.  You might expect that in a country such as Japan the names and logos on domestic would be in Japanese orthography.  But no, they’re mostly in English, even guitars that weren’t made for export.  You see, there was this little thing called World War II, which Japan lost, followed by the Allied Occupation.  That meant that “domestic consumption” included thousands of English speaking GIs from various countries who were a prime target market.  Indeed, the guitar seen here very likely got to the U.S., where I bought it much later, in the hands of an American GI.

This is a pretty cool guitar, probably made around 1961.  While some of it is primitive, quite a bit of work went into making this guitar.  The neck is mahogany glued into a solid maple body.  It’s called an “Electric Guiter,” spelling error forgiven.  As is the name “Guitar Mike” for the pickups!  The neck is pretty hefty to compensate for no truss rod.  The moveable bridge at first seems like a joke, but then Harmony and Kay used similar designs, and a moveable bridge is not as funny as a fixed bridge in the wrong position!  There’s no pickup selector, but two volume controls with a master tone are actually pretty effective.  I actually like sharp high end of these pickups, although, like almost all early Japanese pickups, they can be fairly microphonic if you like to move around a lot.  To paraphrase the television ad aimed at Seniors, “Just don’t move.” 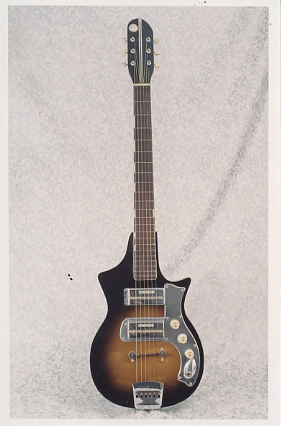 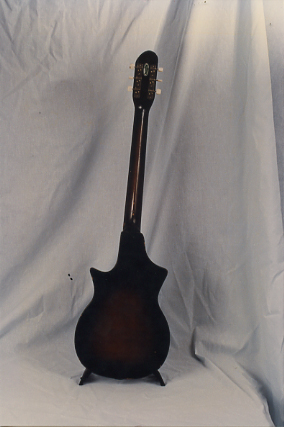 I don’t think these early Teisco guitars are all that common.  This really dates from before Jack Westheimer added the “del Rey” to the brand name and began importing them.  By the mid-1960s Teisco del Reys had become pretty ubiquitous.

It’s easy to scoff at these early Japanese designs (although if you like Eastwoods and Airlines, you probably wouldn’t scoff), but back in the early ‘60s what an electric guitar was wasn’t always so well defined.  Or, maybe it was, but just by the big American guitar companies.  Now with hindsight we can appreciate the finer points of this early Japanese design.  Probably not so good for heavy metal but great for Ventures or Byrds tunes (as long as someone plays a 12).  And, for sure, it was really made by Teisco, whatever anyone else says!