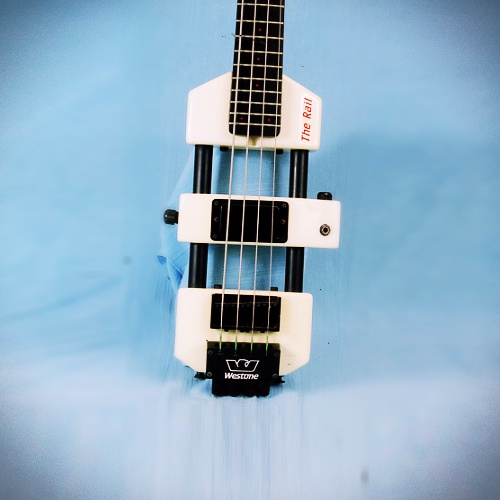 Of course, we’re not all about just electric guitars – it’s always great to have a look at some great rare BASS guitars, too! In this new guest post, Michael Wright highlights a forgotten gem from the 80’s…

While I consider myself to be a “guitar player,” I actually had a blues-rock band back in 1967 for which I also played bass (Hagstrom) and keyboards (Farfissa).  I wasn’t particularly noteworthy on either.  To be honest, I pretty much played them both like guitars.  The good news is I never got into collecting basses or keyboards.  Unless, that is, they were exceptionally interesting, like Westone’s short-lived The Rail.  How could you not like The Rail!

The Rail was kind of a perfect reflection of the time it was made, in the mid-1980s.  Now, electric guitars have always had an element of “style” about them.  The fact that they make sound by use of an electronic pickup instead of an acoustic sound box frees them from certain physical restrictions.  As cool as a cigar-box guitar might look, it’s never going to sound as good as that classic Spanish figure-8 shape of an acoustic guitar that’s evolved over centures.  But once you shift the responsibility for making noise to an electronic circuit, you do whatever you want with the rest—or at least with the body.  And that puts you squarely within the realm of style!  The kind of image you want to project when you play guitar determines what kind of axe you’re going to sling. 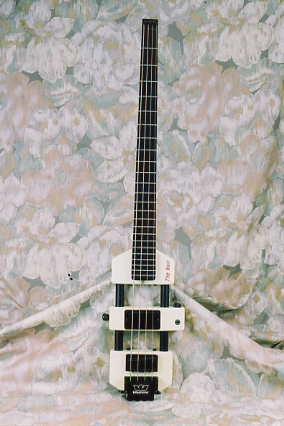 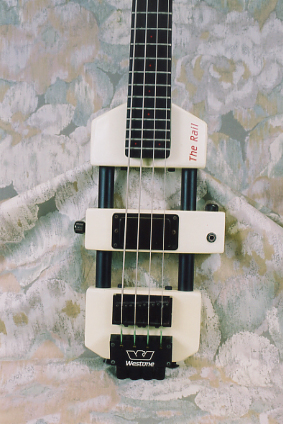 Prior to the ‘80s styles of electric guitars came and went, of course, but there was something homogenous about guitar styles.  Strats were popular this year, Les Pauls were in the next.  With notable outliers on occasion, like the 1967 LaBaye 2×4!

But as the 1980s dawned, guitar styles—just like popular music styles—began to proliferate, to fragment.  Heavy metal was on the rise and with it a taste for exotic guitar shapes, pointy guitars like Flying Vees even more non-Spanish shapes (to go with the wild hairdos).  Companies like Ibanez, Aria, St. Louis Music, even Fender all introduced pointy guitars in various outre shapes.

For players in a more conventional frame of mind, this period saw the emergence of the Super-Strat, a Strat-style guitar with hybrid electronics combining a lead humbucker with two single-coils and, eventually, a locking vibrato system.

On the opposite end of the spectrum were New Wave bands with slick, tightly arranged pop tunes.  For these groups—like The Police—their style was enhanced by the understated look of minimalist guitars.  This was the era that saw the emergence of headless guitars and basses by Ned Steinberger and others, favored by The Police’s Andy Summers.  Kramer had its Duke.  St. Louis Music had The Rail. 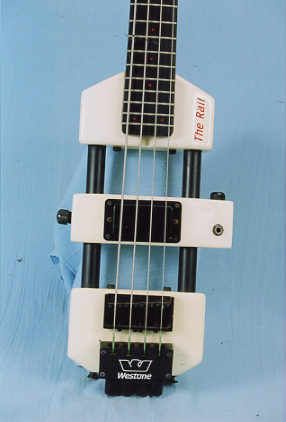 The Westone Rail appeared just as St. Louis Music (SLM) was transitioning to a new brand name.  During the “copy era” of the 1970s, SLM’s Japanese-made electric guitars were branded with the Electra name.  The Electra name continued into the early 1980s.  Most of those guitars were made by the legendary Matsumoku factory in Matsumoto City.  Around the beginning of the decade Matsumoku began marketing its own brand of electric guitars called Westone.  For reasons unknown, the decision was taken to consolidate the Westone brand name with St. Louis Music.  In 1984 the separate Westone line went away and SLM’s guitars became Electra-Westone, ending up just Westone in 1985.

It was with this transition to Westone in 1985 that SLM entered headless sweepstakes with The Rail, the Super Headless Bass, and the Quantum bass.  The Super Headless Bass had a cool, slim, bi-level offset double cutaway with a headless neck.  The Quantum bass had a sculpted minimalist body looking somewhat like a space cruiser out of Star Wars.  Both these had twin humbuckers.

Of all these The Rail X800 was, to me, the most interesting.  Instead of two humbuckers, The Rail put two pieces of hard maple on either end to two specially tuned stainless steel tubes.  Then it placed a third piece of wood mounted with a single Magnaflux RB pickup onto the rails.  The idea was that instead of two fixed points (neck and bridge), you could fine-tune your tone on a spectrum by sliding the pickup back and forth between those two set points.  The knob on the top is a quick-release tension screw to hold the pickup unit in place.  The only electronic control is a master volume.  Add to that the fine-tuners at the butt-end, and everything is right there under your plucking fingers.

The scale on these was 32.5” with a two-octave fingerboard.

The first Rails were produced in a satin black finish.  In 1986 the line was expanded to include the X800RD in red and the X800SW seen here in white.  The list price on these was $565 with a gig bag. 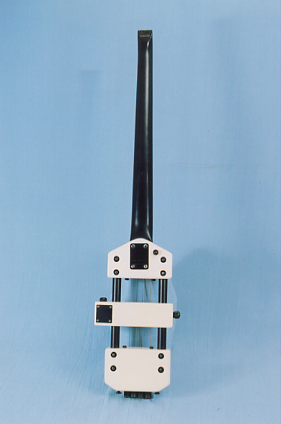 Since I’m not really a bass player, I can’t really opine about how effective this design is.  Give the geography of the string length between the end of the fingerboard and the bridge, the moveable pickup gives you the equivalent of about 3-1/2 pickups.  I don’t know how much of that is useful from a tonal perspective.  Plus, you have to think about what position the pickup should be in before you start to play.  On a traditional instrument, you just have to throw a switch, which you can do in between beats!

I never played this bass much, but I did used to take a headless Steinberger copy with us on vacations down to the Jersey Shore; it was a great travel guitar that fit in the corner of my car trunk.  But I always found my left hand slipping off the end of the fingerboard because I couldn’t get used to playing with no headstock…

I don’t know how popular these were back in the day, but interestingly this example has a serial number of “5.”  That suggests that the catalog claim of “Limited Production” is probably accurate!  I think I’ve only seen one other of these over the years.  It didn’t help that the Matsumoku factory closed down in 1987.

The rage for headless instruments had pretty good staying power, lasting pretty much through the ‘80s.  Steinbergers and others continued to be made, and I recently noticed there’s at least one dealer who specializes in headless instruments.  But with the ‘90s came Nirvana and the “alternative” Seattle sound that more was anti-style than anything else.  Still, you gotta admire the chutzpah of The Rail bass, whether you’re a bass player or not!