“Yeah,” said the dealer, half in contempt, “and it’s got one of them there spigots.” Spigots? He didn’t realize I was a pretty cool customer in those days, able to hide my curiosity – but he’d gotten my attention. What the hell was a spigot? “You know,” he added, “you hook your pinky over it and get tremolo.” Done! That was my introduction to German electric guitars. I was, so to speak, hooked!

What I’d gotten in that dark, dusty Philadelphia guitar shop was a 1965 Framus Strato Deluxe, essentially a solidbody version of the hollowbody 1963 Framus Television 5/118 shown here.

Now, you have to be careful about ethnic stereotypes, but since I’m half German, perhaps I may be permitted to agree that there is a Teutonic affinity for engineering. I see it in myself. You see it in German cars. And you see it in German guitars from the golden age of the 1960s like these Framus’ better models! 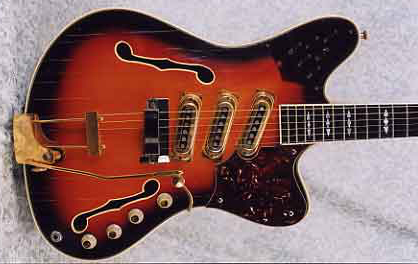 Germany has a long history of instrument making going back at least to Medieval times. Framus, short for Franconian Musical Instruments, dates to 1946 when Fred Wilfer set up shop in the American controlled part of Germany in Bavaria. While they made lots of different instruments, by the mid-1950s guitars were Framus’ main product, mainly for exportation. After the Beatles hit, the American market for electric guitars mushroomed and Framus became an early supplier of the demand. Their primary American distributor was Philadelphia Music.

But the main attraction of Framus guitars was under the hood, in the electronics. Powered with three fat single-coil pickups, each operated by its own sliding on-off switch. Then of course there was a master volume and three tone controls, with separate on-off switches to bypass tone controls on the neck and bridge pickups.

But best of all was the spigot, known officially as the ‘Orgeltone,’ or Organ Tone, a manual tremolo with, of course, its own on-off switch. Can’t have too many of those! Basically the spigot was a volume pot that was reverse wired and spring loaded. The spigot was simply a hefty hook that you wrapped your right pinky around. As you picked the strings, you curled your pinky up and down to modulate the volume downward (reverse). The effect is a lot like an onboard Hammond organ! Orgeltone! It takes a little practice and coordination, but once mastered it’s a pretty cool low-tech engineering effect.

Framus guitars thrived as low-cost alternatives in the US until cheaper Japanese guitars and higher European labor costs phased them out. By that time the Orgeltone was also history. Gone but not forgotten, because whenever I feel like it I can limber up my pinky and let the tremolo kick in for a nifty doppelganger effect. And bring back fond memories of my first encounter with German electric guitars that fateful day in that Philly guitar shop when I was first introduced to the spigot!