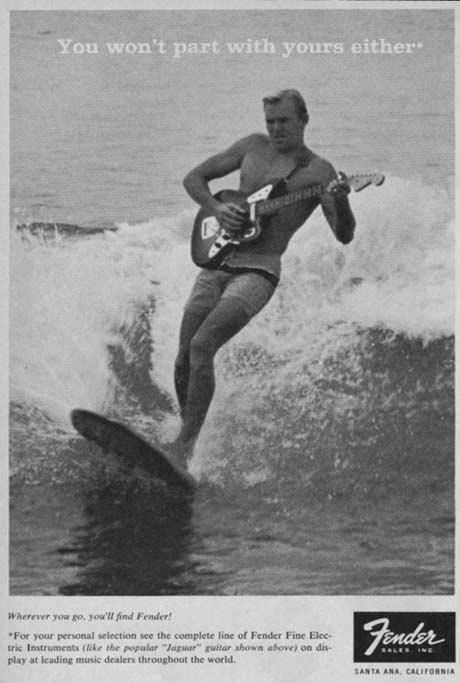 Since its inception, legions of surf guitar players have engaged in heated debate about gear. Suffice it to say, everyone has an opinion. However, newbies often want a simple answer to the question, “What do I need to get going?” Here’s our surf music guitar guide to help you out!

Below, I lay out the answers, based on the classic traditional surf sound of the Sixties. Whether you want to nail the sound with vintage gear, or whether you are on a budget, you’ll find useful guidelines here.

Instrumental surf music has its own distinct sound – influenced by both the natural sounds of waves crashing on the beach, the typically rudimentary skills of its early performers, and technological breakthroughs in amplified guitar technology during the hey-day of surf music, the early 1960s. In short, the key characteristics of the surf guitar sound are a clean tube-amp tone and heavy reverb. Not coincidentally, those sounds are closely associated with Fender musical instruments. Back in the day, all Fender instruments were made in Southern California, just a mountain range away from the Pacific Ocean. Naturally, Fender had a huge impact on the early surf musicians blasting out their instro tunes in the music halls of SoCal.

Most early surf bands made use of a full array of Fender gear, beginning with the famous single-coil guitars that still define “the Fender sound.” Dick Dale, the father of surf guitar, played his staccato machine-gun sound with the help of “the Beast” a highly personalized Fender Stratocaster.

Today, the Strat remains a favorite choice for surf guitar slingers. The most popular Fender surf machines, however, are the Jazzmaster and its twangy, shorter-scaled cousin, the Jaguar. While nothing tops a vintage Jazz or Jag dated anywhere from 1958 (the first year of the Jazzmaster) to about 1966 (the venerated “pre-CBS” era, when Fender was still owned and operated by Leo Fender), you’ll have to shell out mucho dinero for the authentic item. 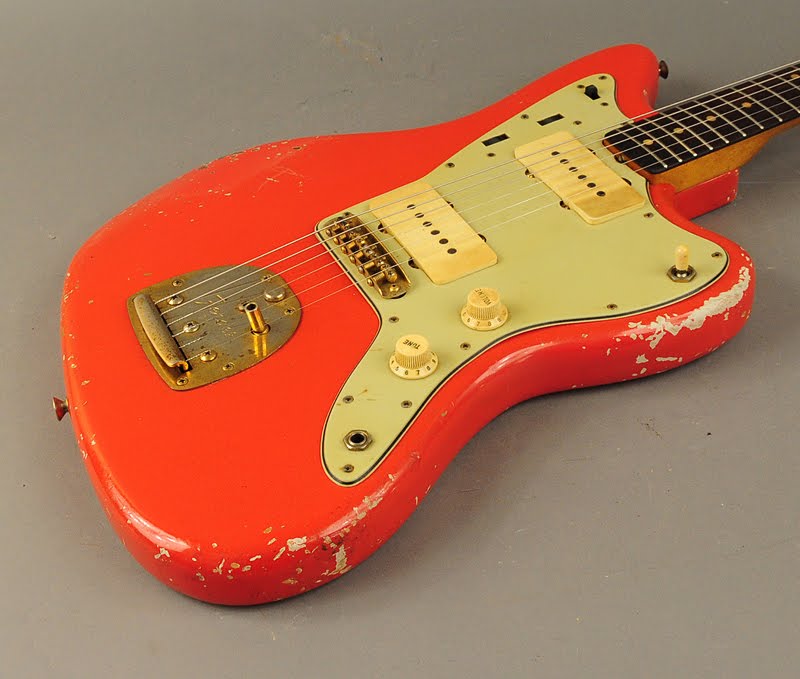 Fortunately, Fender has created excellent reissues of its classic instruments. Most players would agree, Made in America (often designated as “MIA”) vintage reissues of the Jazz and Jag come very close to the sound and mojo of the originals, and can be had new or used for less than a king’s ransom. For those on a budget, the Made in Japan/Crafted In Japan models (often denoted as “CIJ” and “MIJ”) come very close to the feel and tone of the American-made models, at about half the price.

A minority of players seek out other vintage guitars popular among early surf bands. Mosrite guitars, made by California’s Semie Mosely, were made famous by The Ventures – not strictly a surf band, but still a vital group in the pantheon of surf music legends. Other popular surf guitars include single-coil models manufactured by Japanese manufacturer Teisco Del Rey, American-maker Danelectro, and the Italian firm Eko. Plus dozens of Japanese guitars churned out during the 1960s and 1970s.

Any of the recent Eastwood Mosrite Reissue models are a great choice if you want to go down the Ventures route: 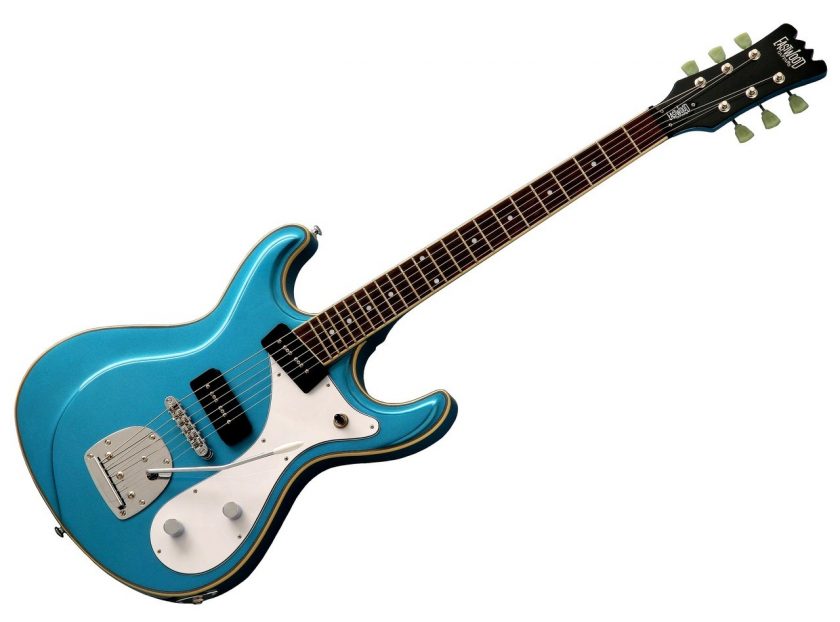 That said, anyone new to the surf sound can get by with most any solid-body electric guitar featuring single-coil pickups. For the economy-minded, a Fender Squier Strat is a good choice. Yamaha also makes some surfy guitars loosely fashioned after the wild SGV models of the late 1960s. Other brands to consider are the Danelectro-style guitars made by Reverend, the retro-60s guitars made by Eastwood, reissue Danelectros, DiPintos, and the many Strat-clones made by just about everyone.

Back in the early 1960s, strings were quite heavy when compared to the light, thin, slinky strings favored on most guitars today. If you want a dedicated surf guitar, as opposed to one set up for playing a wide array of rock music, you’ll want to stock up on the heavier guages – high “E” strings of 11, 12, even 13. The true surf sound was typically played on ribbon-wound or “flat” wound strings; these help reduce string-slide sounds and have a mellower tone than the more common round-would strings. However, this is an item of personal preference; many surf guitar players swear by flat-wounds, while most continue to play the cheaper and more widely available round-wounds. 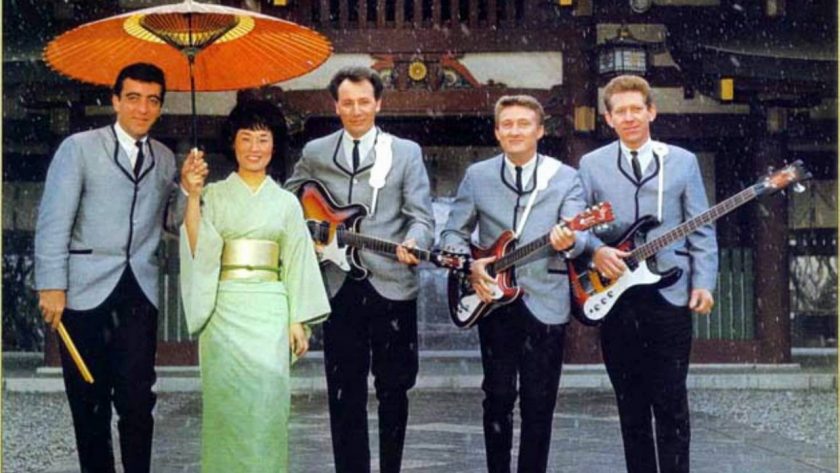 The Ventures, one of the greatest surf bands ever, played Mosrites

One last note: one other characteristic of the surf sound is whammy bar dips. Not the dive-bombing acrobatics of Eddie Van Halen, but a nice quarter or half-tone warble. Any worthy surf guitar should have a bridge set up to create this sound; used judiciously, they will stay in tune. Hard-bridge guitars, such as most Telecasters, lack this feature, making them less desirable among surf guitar players.

Surf music played a big role in the acceptance of the electric bass and the movement away from the standup basses used by Jazz, blues, and rockabilly musicians of the 1950s. The surf players ushered in the era of the electric bass, launching the modern rock bass sound. Of course, the surf bands used Fender basses, both the Precision bass and the Jazz bass. Another popular brand was the Danelectro Longhorn bass, with its distinctive double-cutaway body.

Just as if their guitars, Mosrite basses were also used by surf bands, such as The Ventures. The Eastwood Sidejack Bass 32 is a pretty good choice, if you want something similar:

Think clean, sparkly treble and a round, clear bass tone. That’s the essence of surf amp sound. The most famous and venerable surf amps are the classic Fender Showman and Dual Showman. These were early amp “heads” intended to be played through Fender amp cabinets, typically with big 15″ JBL D-130F speakers. These setups have mountains of clean headroom, sufficient to spread the sweet surf guitar sound across an entire auditorium of stomp-crazed beach kids looking for some fun on a Saturday night. You can still find a bargain on Showman heads by shopping eBay, but snapping up the matching cabs with JBL speakers will cost you a month’s salary or more. 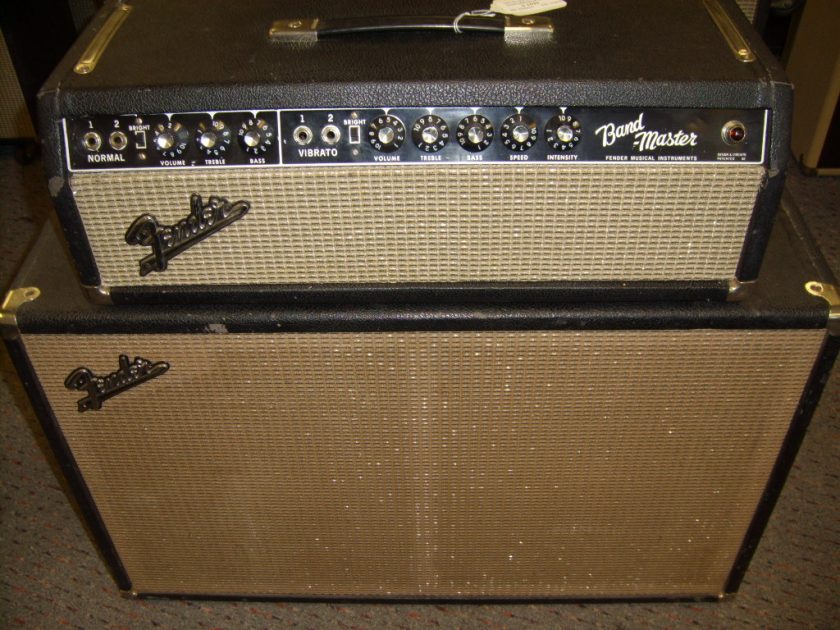 Other popular early Fender amps are the Twin Reverb, Deluxe Reverb, Bandmaster, Vibrolux, and Super Reverb. Any of these true vintage Fenders will likely put you deeply in debt. Fortunately, Fender has revived many of its timeless designs, which are available as the reissue series. The ’65 Twin Reverb, the ’65 Twin Reverb Special 15, Custom Vibrolux, and the Deluxe Reverb Reissue are all excellent choices for surf music. If you want to lay out serious dead-presidents, the VibroKing Custom comes with a built-in ’63 Fender Reverb (see “Reverb” section, below), while the new SuperSonic combines the tones of the classic Vibrolux, ’66 Bassman, and modern high-gain amps.

That said, there are many other affordable – and not so affordable – amplifiers from which to choose. For novices who want to play at home, the Fender Blues Junior gets great tube tone. Other good choices are the Fender Blues Deluxe, a 40-watt with great versatility, and its beefier brother, the Fender Blues Deville (also sold as the ‘Hot Rod’ series amps). A bargain-basement amp that has excellent surf tone is the Fender Frontline 25R, a surprisingly warm-sounding solid state amp. Of course, you can play through a classic Marshall stack or Vox AC30 (the amp used by the fab British instrumental band, The Shadows). Anything is possible – just bear in mind, you’ll be straying from the classic surf sound.

Another choice (and this is mainly for guitar players with lucrative careers as doctors, attorneys, business execs, and mafia captains) are boutique amps. Many makers, most notably Kendrick and Victoria, have re-created hand-wired amplifiers based on the classic Fender circuits. You’ll get classic Fender tone without having to worry about the reliability issues that come with owning a 50-year-old piece of electronic gear. Unfortunately, the boutique makers seem to focus largely on the tweed-era Fenders of the 1950s, rather than the black-face amps of the 1960s, when surf guitar ruled. So, some of the boutique amps seem better suited to mildly distorted blues than to crystal-clear surf.

Ahhh, reverb. One of the earliest effects created for guitar, and the essential ingredient of surf sound. Originally intended to create an ambient atmosphere, like a large music hall, reverb came to the fore in surf music with the creation of the Fender Reverb based on the G15 circuit. Turned up midway, they do capture the sounds of amplified music bouncing off the walls at a high school hop. But turn the dwell, tone and mix knobs up past the mid-mark, and you start to get the wonderful resonance of a guitar played at the bottom of a well, or in a long tunnel, or perhaps through the barrel of a breaking wave. Coveted by surf musicians, these original tube reverb units are the standard by which all reverb is compared – and by which most fail.

Basically a stand-alone box, tube reverb works by taking the original guitar signal, pushing it through a series of springs mounted in a box, then recapturing and amplifying the sound again before sending it along to the amplifier. Soon after the creation of the tube reverb effect, Fender began adding reverb to nearly all of its popular amp models; however, most will agree that the reverb effect built into the amp itself is a pale and sickly cousin when compared to a true Fender reverb.

Today, you can buy reissue models of the classic Fender ’63 Reverb, but bear in mind, these are not actual copies of the originals. While the circuits are similar on paper, the newer units have circuit board construction, rather than the hand-wired circuitry of the originals. You can, however, find hand-wired reverbs by boutique makers such as Victoria, Soldano, and Kendrick, all based more-or-less on the original G15 circuit. You can also buy a kit and build your own (Weber Vintage Speaker Technology of Kokomo, Ind., is a good source for such kits).

If you can’t spend the $250 for a used reissue much less the $600 or more you will pay for a vintage Fender reverb or a boutique clone of the original, you can go with a variety of pedals, starting as low as $35 for a Danelectro mini-pedal to about $150 for a Little Lanilei reverb pedal that actually uses a spring reverb tank. Other popular models include the Electro-Harmonix Holy Grail and Holier Grail, the Verbzilla, and the Digitech Digiverb, which all get excellent reverb sounds for just over $100.

Finally, you may find that the reverb in your amp works plenty good. You may not get the sputtering “boosh” sounds of a true Fender Reverb, but you may find that it’s enough reverb for your throbbing versions of ‘Pipeline’ and ‘Miserlou.’ Then again, you might be like surf guitar aficionado Jeff ‘Big Tiki Dude,’ who believes that there is no such thing as too much ‘verb.

8 thoughts on “Let’s Go Surfin’: How to Get the Classic Surf Guitar Sound”