Maybe it was the smarmy, frozen smiles thrust kind of aggressively into the camera. Or maybe it was because our PARENTS chose the TV programming. Not that there were very many options back in the day when you were lucky to get three network broadcasts, depending on where you lived. If you were lucky enough to have a TV. Or maybe it was because my little sister played insipid beginner tunes on a black-plastic and pearloid Silvertone piano accordion (“The bear went over the mountain”). But every Saturday night it was the Lawrence Welk Champagne Hour “wonaful, wonaful” with those big honkin’ accordions. Take it away Myron. For years I hated accordions. Little did I realize their vital connection to the guitar, as can be seen, if you know what to look for, on this little 1965 Avanti from Italy.

It’s amazing how little you know when you’re in the middle of things. Especially when you’re young. Even though I was prime-time ’60s, I didn’t really become aware of Italian guitars until I began writing about them several decades later and, with a personal attachment to Milwaukee, learned of the Lo Duca Brothers and EKO guitars. It was talking with the Lo Ducas that I learned of the accordion connection. Duh.

That’s because those very accordions I’d hated as a kid were the equivalent of what the guitar became a decade later. Very popular. And very Italian. The piano accordion “with keyboards instead of buttons” was invented in Vienna in 1863 and brought to the area of Castelfidardo on the eastern coast of Italy. The instrument was embraced and a lively accordion manufacturing industry grew up in the area. It’s still a major center. While accordions were also made in Germany and Sweden, the vast majority played during the 1950s were from Italy. 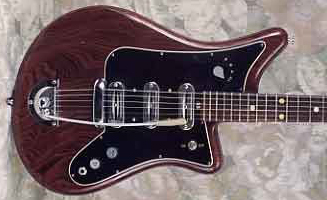 As fate would have it, the rage for accordions in the US at least passed by the mid-’50s. Accordion makers struggled to replace the lost business. Lucky for them Baby Boomers like me came along with a taste for playing guitars. Doubly lucky for them, there was a long tradition of guitarmaking in the same part of Italy. When the American electric guitar market exploded in the early 1960s, the Italians were among the first European sources of guitars for meeting the demand. One of the hallmarks of early accordions was the use of plastic covering. Thus it was natural that, when switching to guitars, they should be plastic covered, which brings us back to this Avanti.

Avanti guitars were probably made by the Polverini Brothers of Castelfidardo for European Crafts of Los Angeles beginning in late 1964. For this one, they chose a really cool rootbeer-barrel colored faux-rosewood plastic covering. Most early Italian guitars had either pushbutton or rocker controls adapted from accordions, but this is unusual with a fourway rotary select that let you choose each pickup individually or all at once. All in all a sensible arrangement. Whether the pickups are really humbuckers or single-coil is unknown, but they have that bright ’60s sound, and, anyhow, you really want an Avanti because it looks like rootbeer candy.

Italian guitars continued to be plastic-covered through 1965 or so. By 1966 guitar players were becoming more discriminating and Italian guitars switched to more conventional finishes. Though not for long. Rising wages and slacking demand, plus implacable competition from Japanese guitarmakers, led to the demise of Italian guitars by 1968 at the latest, at least in the American market.

Since discovering these plastic-covered marvels I’ve become more interested in the piano accordions that spawned them. I’ve even contemplated picking one up to play it. But one thing they haven’t done. And that’s change my opinions about watching the Lawrence Welk show, no matter how wonaful it may actually have been.