Myths and misinformation (Mythinformation?) abound in the vintage guitar and amp world. Want to start a fight on line? Go to some gear forum and say, “This, without a doubt, is the amp Jimmy Page played on the first two Zep albums.” The amp you use for this example could be a small single 6V6 Supro, a Supro Thunderbolt, a Fender Champ, or any number of others. No matter what, you are guaranteed to get a bunch of folks agreeing with you, and another bunch so angry they start banging their shoes on their desks al-la Krustef while hacking frustrated spittle onto their screen while they post about what an idiot you are.

I recently saw a later model (Blue faced) Supro Corsica going on eBay and the seller claimed THIS was the Jimmy Page amp…he was positive…everyone had it wrong…if you wanted THE TONE this was the Page amp. It, naturally, got the “question/comments” section crackling with replies (including, yes, I admit it, one of mine…I just can’t help myself sometimes) asking where this guy got his information, how did he know, and so on. He also claimed the Bluefaced Supros were EXACTLY the same (minus cosmetics) as the earlier Gray Tolex-ed models, which just isn’t true (I’m hardly a Supro expert, but just easy simple research will show you they often changed the guts over the years).

The upshot? The amp, which looked to be in so-so condition, sold for $450 amidst a series of increasingly angry and defensive responses from the seller about what idiots the people who were writing him were….Along the way, there were wonderful stories and theories about Page’s amp (it was destroyed in a fire, yet somehow is at the R&R Hall of fame…some have seen photos that prove it’s a Thunderbolt; some that prove it’s not…I half expected someone to say they had a photo where the grill cloth had the outline of the Virgin Mary head-banging in it or something).

And Thunderbolts (the most common, and probably correctly, Page-associated model) these days are drawing anywhere from $800 to $1,200.

And you know what? Page or no Page, cheap (ten years ago) or not cheap (today), they’re TOTALLY worth it. They’re very well put together (if not as easy to service as a Fender – but then, what, except for a Fender Clone, is?), have plenty of volume for a gig, take pedals well, and sound awesome without a pedal at all. It doesn’t really matter what Page played on those albums (or if and when Hendrix used a Supro), because IF YOU use a Thunderbolt, you will sound REALLY GOOD. And isn’t that the point of all this tone chasing us sick, diseased, deranged gear-addicted people do?

And, despite the enormous (and goody for all of us, I say) amount of boutique amps companies, there really aren’t many Valco-ish boutique amps out there. In the early 90’s, everyone seemed to be building a Fender Tweed copy (with variations, of course). Then, it was Fender Blackfaces. Then, the current 18-watt craze. 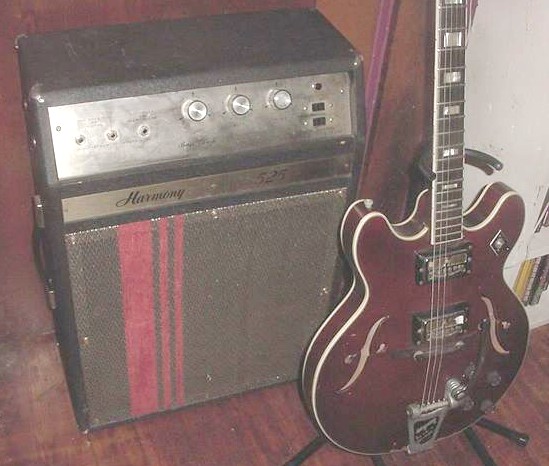 And it makes some sense. With Tweed Fenders going in the 3-5 Grand range, why not pick up a point-to-point (or hand stuffed circuit-board) copy of one of those great amps for two thousand? But no one could build and market a Supro Thunderbolt clone, with high grade parts, for any less than the $1,000 you’d pay for an original with a cap job and a tune up. So, while their price has gone up (lots) in recent years, they are still something of a vintage bargain, and they’re awesome amp.

But what if you can’t scrounge up $800-1000 for that tone, let alone a couple thousand? Enter the Harmony 420 and the Harmony 525 bass amps (made by Valco in the, respectively, mid and late 60’s). It’s much like a Supro Thunderbolt, with some minor differences, on a budget. On a super budget. They can be found, with some regularity, in the $200 range. Wow! Well-built 60’s tube tone for that kind of price?

The 420 (in the black paper covering with the silver grill cloth) and the 525 (racing stripe!) are the same amp on the inside. They run a ½ of a 12AX7 for the preamp (leaving ½ unused for you gain-adders and modifiers), another 12AX7 as the phase inverter, and two 6L6’s for the output (all the same as the Thunderbolt). The speaker is a 15″ ceramic Jensen (ditto- same as the Thunderbolt).

Where they differ from their Page-ian (Page-esque? Page-larian?)brethren? A solid state rectifier and a different tone control (the Harmonys have separate 500k Bass and Tremble controls, while the Supro has a single tone pot) that makes it a little more constipated sounding than the Bolt (this can be addressed).

I snagged the one in the photo (posed with a beat up, amazing Harmony H-72) for 100 bucks from some clown who refused to ship it. Local pickup is always nice…especially when it’s all they offer and you are the local one! Turned out it was a pawn shop about fifteen miles away. This was a great deal – the speaker needs a recone, or I’ll probably buy a Weber Alnico for it, as I’ll gig with it and tend to get new speakers for that. Some minor (very minor) modifications to the preamp for more gain, new filter caps, and this thing is a sustaining singing overdrive blues/rock amp.

Even if you have no interest in picking up a soldering iron, you can buy these for around two hundred bucks and invest very little at your tech’s and get a vintage Valco-made amp with boutique tone for under $400. You can’t beat that.

If you can afford it, though, get the Thunderbolt, too. That tube rectifier sings. And, you know, it was on every single song Jimmy Page ever cut. EVER! He never ever ever ever recorded without his Supro! And, just so you know (and capture THAT tone), he always put it 18 inches to his left and 17 inches behind him, wore a paisley shirt whenever he played it and never ate hamburger the day of the recording.

And before that, Arthur pulled a sword out of this most legendary of amps and became king of England……and after that, the Supro Thunderbolt discovered America while looking for spice routes to Asia…and after that it wrote the Canterbury Tales. Or maybe I’m thinking of Communication Breakdown?

Bio: Rob Roberge is the author of Working Backwards From the Worst Moment of My Life (due Oct 10th), the novels More Than They Could Chew (Perennial Dark Alley/Harper Collins, February 2005) and Drive (Hollyridge Press, 2006). He teaches writing at the Antioch University Los Angeles, MFA in Creative Writing and the UCLA Extension Writers’ Program, where he received the Outstanding Instructor Award in Creative Writing in 2003. He plays guitar and sings with several LA bands, including the legendary Punk pioneers, The Urinals. In his spare time, he restores and rebuilds vintage amplifiers and quack medical devices. For news and more info, visit & or email at either www.myspace.com/robroberge or www.robroberge.com