One of my favorite “student anecdotes” involves a young lady who dated World War I to around 5 Million BC on a test because “it was, like, the first one, right?!” I hope she got an A for effort! Anyhow, as wars recede their meanings change with each succeeding generation. Ask a young person today about the Viet Nam War and you might be lucky if he’d ever heard of it. For some older folks among us it seems to have happened only yesterday, transforming their lives so much that they live with it every day. For others of us, it has just become a murky bad dream that we’re only reminded of when a guitar like this ca. 1965 “Pinoy Jazzmaster” forgery comes around!

Say what? You read that right. Pinoy, by the way, is an adjective often used to describe things Philippine. You see, from the Spanish American War in 1898 until 1992 the island nation known as the Philippines (named by 16th-Century Spanish “discoverers” for King Philip) was the home of the largest US military presence in Southeast Asia. 1898 because after Teddy Roosevelt and his Rough Riders beat the Spanish in the Caribbean, the US acquired the Philippines as territory from Spain. This actually didn’t please the Filipinos very much, and after numerous attempts, the Philippines finally gained its independence from the US in 1946. However, the Americans kept a huge Navy base – the world’s largest at Subic Bay next to Olangopo City on the western side of the main island, not far from Manila.

It was from this vast Naval base that much of the Viet Nam War was staged. Many of the soldiers passed through Subic on their way to Viet Nam and many more spent some of their R&R there. As you can well imagine, with such a large presence of young American men on the island, a number of industries sprang up around the base to serve them. Among those endeavors was a thriving cottage industry of forging copies of American guitars which were then sold to probably inebriated Americans, some of whom brought their Pinoy prizes, like this Jazzmaster, home with them. Apparently the main center of this activity was the town of San Fernando, which lies halfway between Olangopo and Manila.

Like, for instance, maple. Maple is a northern hardwood. The Philippines are tropical islands in the South China Sea. Basically what they have is mahogany. Basically what these guitars were made of was mahogany. Need maple for a neck? You take some bleach and make some maple-colored mahogany. And basically everything on these guitars was hand-made. Hand-made frets. Hand-made pickups. Hand-made pickup covers. A hand-made copy of a Fender vibrato. Some of these even had hand-made logos. Obviously they had access to some electronic parts such as switches and volume and tone controls, but most everything else was made out in the garage. 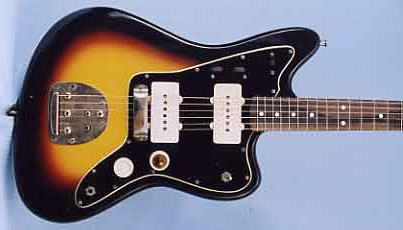 This particular example is unusual for having no logo. The neck is bleached mahogany, with a mahogany body. The fingerboard actually is rosewood. The bridge is wood with a bone saddle. Even the case is a tolex-covered “copy” of a Fender case.

This guitar probably looked pretty good after half a dozen or so Pabst Blue Ribbons, but it’s really more interesting as an artifact from the glory days of Subic Bay. This particular guitar was probably built in the mid-1960s when the Jazzmaster was Fender’s top of the line. It’s quite playable, just not exactly what it seems!

There’s no telling how many of these Philippine forgeries came back to the US with GIs. I’ve seen a couple of them. The bleached mahogany neck is almost always the tell-tale sign that you’ve got a guitar from a San Fernando garage. Whether or not forged guitars continue to be made in Philippine garages today is unknown, though apparently the evidence of the trade can still be found. Apparently this trade thrived at least from the early 1960s until the US finally closed down Subic Bay and turned it over to the Philippine government in 1992. Calling this relic from the Viet Nam War era a “Fender Jazzmaster copy” may not be as clever as the young lady’s dating of World War I, but it still makes a pretty good anecdote!

One thought on “Of Forgeries and War! (1965 Pinoy Jazzmaster Electric Guitar)”