Judging by many of my last few years guitar purchases (on Ebay and elsewhere), I’m the kind of a person who seems to think he’s the kind of a person who likes guitars with a lot of knobs and switches. I’ve bought several multi-pickup guitars. Old ones, new ones, new ones made to look like old ones (not those stupid “relic-ed” ones, though…I’m an idiot, but I’m not stupid). Yet, as I look at the keepers in my collection, I’ve only kept one guitar with more than four knobs, and none with more than two pickups. Odd.

Many of them have been beautiful – for instance, a white 4 pickup Kawai model. Slider switches for each of the 4 pickups, plus one of ON/OFF. Which struck me as strange, at best…why, after all, would you need to turn your guitar “off” unless you were doing that cool Morse-code deet-deet-deet noise at the end of the Clash’s “London Calling.” Wait, I may have answered my own question.

But back to the Kawai. It was a creamy white like Fender’s Olympic White, the pickups were all shiny chrome, and it had a pretty cool whammy bar with a chrome bridge cover. Rosewood fingerboard. A pretty snazzy looking guitar. I saw it and had to have it.

But, like pretty much every three or four pickup guitar I’ve ever owned, it was a pain to play live. Plus, one pickup setting seems to always sound better than the others (to me, usually the neck pickup). But, damned if I don’t fall for the pretty temptress of the multiple pickups every time. I sold it a month later, realizing it wasn’t as good sounding or reliable or easy to play as my main stage guitars.

Pretty much, I play shows with my two main guitars: My 1969 Telecaster and I get a lot of tonal variety from its two pickups (a ’66 DeArmond from a Harmony in the neck and an original bridge pickup), three position switch, and the volume knob. My other main stage guitar is my new(er) Eastwood Airline H 44 DLX. Again, a two-pickup guitar with a single volume and tone knob. Through either my Deluxe Reverb, or my Silvertone 1484, I can get a nice rock clean by rolling off the volume knob, and a great overdrive by turning up. No need for pedals. Simple and awesome tone.

But this piece is about the keeper. The one eBay find that has stayed in the rotation, yet is labored with a series of knobs, some of them even downright confusing knobs!

The multi-knobbed guitar I’ve finally found that’s plenty simple for live playing, and yet full of tonal options for the stage or studio is the 1962 Harmony Silvertone 1423L Jupiter model. 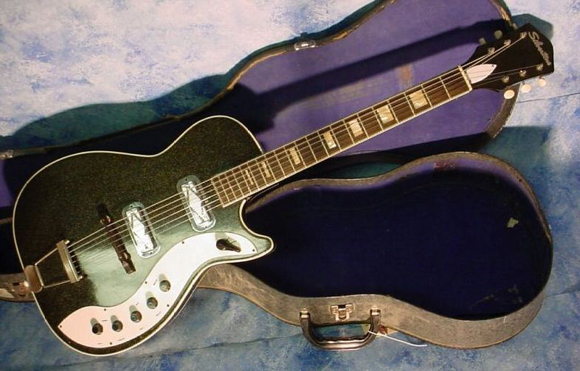 For those unfamiliar with Harmony guitars, in their rough heyday from the 1940’s to the late 60’s (they did limp to a close in the mid 70’s, but most of their cool advances and designs in guitars are from the earlier years), they were, for my money, the most underrated American guitar company going. While, yes, they mass-produced guitars more than anyone else (in one year alone, they made more guitars than all other American guitar companies combined in that same year), they were frequently great playing and great sounding instruments.

There are a variety of great and affordable vintage Harmonys, and many of the top of the line models are great professional guitars. There are exceptions to the general rule, but most Harmony collectors like to go after the models with the block inlay necks. There are some knockout dot-neck models though that have recently gone through the roof, price-wise (such as the original H44 Stratotones popularized by Rick Holmstrom, Junior Watson, Tom Waits now going for over two grand a pop). But, as I said, those are the exceptions – most of the collectable Harmony guitars are the block inlay neck models, such as the H62’s (big jazz box), H75-78’s (thinline archtop three pickup models), and the Silvertone 1446L (Chris Isaac models), among others.

And also, to add to that list of great guitars, the Silvertone 1423L Jupiter and its sibling with the Harmony label, the H49 Jupiter. These are remarkably versatile and great sounding guitars. They sport two DeArmond (Rowe Industries) pickups, with a volume and tone for each along with a three position selector. The difference? There’s a fifth knob – the rare ‘blender” switch, engaged when the three-potion toggle is in the middle (both pickups) position.

And what is a “blender” switch? It’s like having a wah-wah knob when the two pickups are engaged. It has at least a couple of uses. One is as a standard wah-wah sound. Play a note while wrapping your pinky around the knob, spin it back and forth and you have a classic wah. OR, set it wherever you like in its tonal sweep and come up with a stunning variety of tones from the two pickups blended. A truly wild feature of the blender is that it seems to tone down the hotness of the pickups, so that you have a slightly cleaner, groove tone on the two pickups, and more of a rock and roll/blues bite and grind on the them when they’re used separately.

And the sound of those pickups when used by themselves! A booming, bluesy grind on the neck pickup, with a ton of aggressive bottom and lush mids along with the bite. The bridge pickup is one of the truly great rock and roll sounds. And these tones are really easy to access when playing live. One of the few multi knob guitars ever made that is user-friendly and easy to dial in when you need a great tone as there’s really not a bad setting to be found on it. These guitars can go from rolled-off mellow jazz to snarling rock with very little effort.

Add to this a very easy playing neck and an astoundingly light guitar (these are semi-hollowbody, yet not neck-heavy), and you have one of the great values in vintage guitars. Another nice feature of this model is that it isn’t prone to the same squealing feedback some of the Rockets and H-series thinlines are at high volumes. Great as those guitars are (and my H72 is maybe my favorite thinline ever), they can be very sensitive to higher volume playing. Not so with the H49/Jupiter.

And on top off all this, both versions, the Silvertone and the Harmony, are great looking guitars. The H49’s are Spruce or Maple-topped in a golden natural wood grain with one of the coolest tortoise shell pickguard schemes, ever (just around the pickups and for the five mini-knobs in gold and the white three-way toggle). The 1423L Jupiters are finished in a sparkle-black top with a white pickguard only around the five mini-black knobs and the three way toggle. Both are lookers, with the H49’s seeming to go for more on the vintage market than the Silvertone. This may be for no other reason than supply, as the Silvertones show up on eBay about two to three times more often than the H49’s.

Either way, if you can find one for a decent price (currently the $500 range for a player and more for a mint show piece, of course), they are a far more versatile and better looking and sounding guitar than a new Strat that would set you back a similar amount of bucks. Plus, they’ll go up in value.

And, of course, they have a blender knob!