How would you feel if you got a gig playing on your local television station and your gear didn’t work? Well, in a way, that’s what happened to me and this 1965 Teisco TRG-2L guitar! Sort of.

Like in most major TV markets, the stations where I live have a roving reporter who gets to go around and do stories on the strange and unusual. You know, pieces about people obsessed with carving pumpkins at Halloween and guys with like 8,000 Lionel trains their basements. I guess I fell into the latter category. Somehow one of these reporters found me out and called to do a story on the weirder parts of my guitar collection. Some might argue that’s the whole thing, but he meant the old Kays and Harmonies and Teiscos he remembered from his youth. I reluctantly agreed and he said “Ok, bring a couple hundred of them into your living room.” Right. You gonna carry them? Expletive deleted. But I picked about 30 or so and spread them around.

Anyhow, on the appointed day the reporter showed up, interviewed me, and started making fun of my guitars. As he worked the room he got to this Teisco with the built-in amp. He threw the switch and hit a chord. Vroo-crackle, crackle. It crapped out. On TV. Ho, ho, ho. More mirth. Oh, great. Doh!

Then again, maybe having an amp built in to your guitar is something to laugh at. The idea isn’t new. Back in the 1930s both National and Harmony, at least, built cases with amps for their lap steels. But it was left to modern transistorized electronics, and the Japanese application of them to the earliest consumer products, to put the amp into the guitar itself. The result was this TRG-2L, one of several models introduced in 1965 that had a small amp and 3″ speaker built in, operated by two 9-volt batteries. These came in a kind of Stratish shape and a sort of Tele-ish shape. One or two pickups. These were the first of their kind.

Ok, the TV performance aside, these actually do work and are kind of fun to play. You can walk around the house and strum without the tether of a cord. Wanna go to the beach? No need for a plug to entertain that campfire circle. Louie Louie, Oh yeah, we gotta go now. (Or were there other words?) And, like most Japanese guitars from this period, they’re really quite well made – and play well – once you set them up properly. The body is solid mahogany (maple neck), and, in case you’re not at a pig roast, there’s even a headphone jack if you want to use this as a practice guitar. 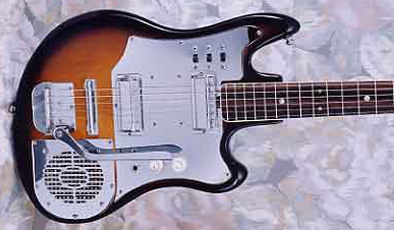 Of course, practice and Pignose amps came much later. But guitars like this Teisco were revolutionary in their time and are still fun to play. You can even run them through a regular amp if you want to make a different kind of impression.

Although you might not want to do it on TV. If these early Japanese guitars have a flaw, it’s in the use of extremely thin wire and economical use of solder. Easy to get that crackle, crackle when you least want it. I’m told the video of me trying to salvage some respect for my goofy guitars still circulates occasionally on late-night Philly airwaves (and cable whatever they are). At least it wasn’t me who lost it on TV! Blame it on time and the Teisco. And that darned cynical reporter.