Eddie Cochran was only 21 years old when he died in an auto accident while on tour in England on April 17th 1960. In his brief but illustrious career Eddie recorded some of the most influential early rock and roll, tunes like, Twenty Flight Rock, C’mon Everybody, Too Much Monkey Business, and Something Else, but Eddie’s Summertime Blues was a monster hit. Summertime Blues was also covered by Blue Cheer (a Billboard Top 40 hit) and the Who (Live at Leeds) but neither version could match the magic and originality of Eddie’s version. 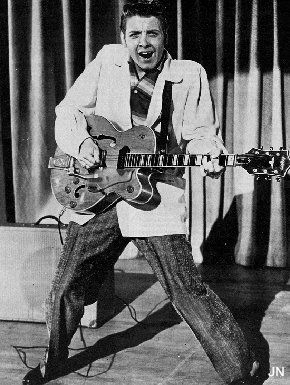 Along with Buddy Holly, Eddie Cochran was the prototype for the guitar playing, lead singer, an iconic image that we all came to recognize later with players like Eric Clapton, and, Jimi Hendrix. But unlike Holly, Eddie possessed Hollywood good looks, those good looks got Eddie a role in the movie “The Girl Can’t Help it”. Due to his untimely death that was to be Eddies only movie role. The few live performances that I have seen over the years show Eddie to be a consummate performer who was comfortable onstage and in front of a crowd. Eddies voice was also a real treat, versatile and very dynamic as he could transition between uptempo rockers and ballads.

Eddie Cochran was born in Albert Lea, Minnesota on October 3rd 1938, Eddie studied music in school (drums and piano) but Eddie gravitated toward the guitar his family had lying around the house, playing mostly country music. In 1955 Eddie’s family moved to Bell Gardens, California, where he hooked up with a few buddies from his junior high school. It was with that band that Eddie (at an American Legion gig) met Hank Cochran, although they were not related they formed a duo called the Cochran Brothers in an attempt to cash in on the popularity of family acts. Eddie amazingly at the age of only 18 got work as a session musician and also began writing songs. Soon thereafter Eddie went solo and scored his first hit record called Sittin’ in the Balcony one of the few songs Eddie recorded that he did not write. 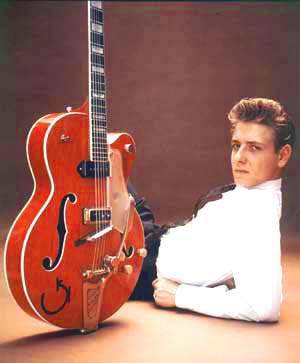 Eddie toured and recorded for almost the entire two years he was famous, it was on one of these tours he met Buddy Holly; they became friends and developed a healthy rivalry. Eddie was heartbroken upon hearing the news of the plane crash on February 2nd, 1959 in which Holly along with Richie Valens and the Big Bopper were killed. Eddie reacted as many songwriters would; he wrote a song called Three Stars dedicated to the fallen rockers, you can hear Cochran’s voice crack during the verse he wrote about Buddy Holly.

Eddies life ended on that fateful night in April of 1960 while a passenger in a London taxi cab that hit a lamppost on Rowden Hill in Chippenham, Wiltshire. Eddie was the only fatality of the crash; the other passengers were Eddie’s fiancée songwriter Sharon Sheeley and fellow rocker Gene Vincent. The cab driver George Martin was convicted of dangerous driving, fined 50 pounds, sentenced to 6 months in jail and had his driving privileges suspended for 15 years.

Peace to all in Rock and Roll Heaven……you know they got a helluva band!