The minute I laid eyes on this c. 1965 Wandré Modele Karak – that is, once I was able to get beyond the knockout shape – I thought “motorcycle.” Take a gander at that vibrato. Look like a motorcycle chevron? And what’s up with that neck? It’s tooled from aluminum, which makes it weird enough. But just like motorcycles have all the works exposed on the outside, this aluminum neck stretches its whole length- head to vibrato – on the outside of the guitar! Even the head frame shouts motorbike. So, is there a two-wheel connection?

Of course, you know the answer is yes, although it only later that I learned of the maker’s affection for bikes. Wandré guitars were the brainchild of a flamboyant Italian conceptual artist named Wandré Pioli (1926-2004). Pioli had been an anti-fascist partisan fighter during World War II, and afterward he studied engineering. In the mid-1950s he became interested in guitars. In 1959 he built a revolutionary round factory in his native town of Cavriago and started production. Virtually all Wandré guitars had aluminum necks, most outside the body like this, though there were some with internal necks and some with bolt-ons. Many were hollowbodies, but some were solid. There were a ton of cool Wandré models, including the famous Bikini with a built-in amp and the BB, a tribute to French sexpot Brigit Bardot. However, almost no two Wandré guitars are the same. He liked to use other odd materials, including vinyl piping and fabric soundhole covers. The backs of his necks are given shape with molded polystyrene plastic. This guitar appears to be built of a composite material similar to masonite and is coated rather than painted.

Most of Wandré’s electronics were provided by his friend and collaborator Athos Davoli. Sometimes the Davoli name on the pickups is the only identifier of a Wandré guitar, causing some to mistake the maker, but once you’ve seen a Wandré you won’t miss it. Pioli favored “blobby” shapes, both for his guitars and inlays, and usually somewhere there’s a “W.” 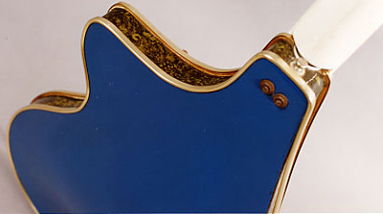 Ok, these make groovy art, but are they good guitars? Actually, Wandrés like this Karak can be remarkably good. The pickups are nice, loud, clear single-coils, and the necks allow for a swell set-up. If there’s a down side, the guitars can feel a little delicate. Maybe it’s the thin plastic on the neck. Or the fact that the vinyl starts to shrink over time and is easily loosened. Probably not the guitar you’d pick to play while jumping off your amp stack.

Oh yes, did I say motorcycle? At some point Pioli found an old motorcycle and spent much of his life restoring and redecorating his prize, tooling around Italy on it. Whether this love of motorcycles actually informed his guitar designs, or simply reflect his tastes, is unknown. In 1969 Pioli tired of guitars, sold the factory and turned to designing leather clothing. Later in his life he was fond of creating art out of found objects, but it’s for his whacky ’60s guitars that he’ll be most fondly remembered.