The guitar shown here may have nothing to do with the famous comedic radio commercial team Bob and Ray, but half the name is right, and, from at least one point of view, this ca. 1967 Alray 12-string is pretty amusing! And as rare as…well…electric 12-strings!

If Alray doesn’t leap to the front of your mind when the subject of guitars from the Swinging Sixties come up, don’t feel too bad. They are about as close to a footnote as you can get. But, then again, as evidenced by the very existence of this guitar, they do, indeed exist!

The first question you might ask is how do we know this is, in fact, an Alray? The easy answer is that Kevin Macy, who lives in Kansas, told me it was when he sold it. But beyond that, this guitar has all the earmarks of guitars made by the Holman-Woodell guitar factory in Neodesha, Kansas, including the tell-tale pickups, and is identical to the same guitar shown in the Alray catalog. So, absent any logos or other explicit markings, we still know this is an Alray 12-string.

Still, I can hear you saying, “So?” You actually probably know a little about guitars made in Neodesha, because among their number are included the whacky Wurlitzer Wildcat guitars and the now-legendary LaBaye 2x4s. All from Kansas and the Holman-Woodell guitar factory. 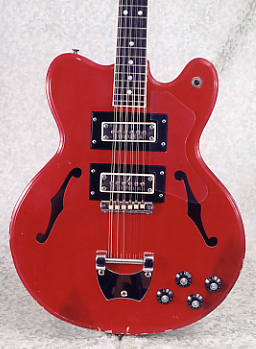 Holman-Woodell was founded by Howard E. Holman and Victor A. Woodell in May of 1965. Holman had worked for the Wurlitzer Music Company, the piano and organ manufacturer located in Elkhart, Indiana. For whatever reason Holman left Wurlitzer and started a music store in Independence, Kansas. Woodell was a retired “former industrialist” living in Sarasota, Florida, who had manufacturing experience. Whether he was originally from Kansas is unknown, but that’s a good bet. They recruited a local woodshop teacher and guitarist named Doyle Reading to be their main guitar designer. Reading would later go on to design guitars for Bud Ross of Kustom amplifiers in Chanute, Kansas.

It’s likely that Holman already had a Wurlitzer contract in his pocket, or at least he could pretty much count on getting one. In 1966 Wurlitzer’s Wild Ones guitars debuted, made by Holman-Woodell. There was a problem in paradise, however. Reading may have known how to work wood and build guitars, but he didn’t quite master painting. Wurlitzers were finished in candy and opaque colors that required a primer. Right away, dealers buying Wurlitzer guitars started returning them because the finishes were flaking off. Wurlitzer quickly abandoned Kansas for European guitars.

Which left Mssrs. Holman and Woodell sitting on a guitar factory. They decided to go it alone and re-branded remaining stock and new guitars with their own name, Holman. While I’m not sure, I think most of these came in transparent finishes, which solved the primer/flaking issue. However, it didn’t solve the sales issue. How many Holmans have you seen? Not many. It was from this period, around the beginning of 1967, that the famous LaBayes date from. At around 45 made, LaBaye wasn’t the answer either!

Howie and Vic hung on until mid-1967 or so and bailed out. That’s when Al and Ray stepped in. We don’t know their full names. In fact, we can’t be totally sure their names were Al and Ray, but when a company changes from Holman-Woodell to Alray, that’s the most logical conclusion! Their sales office was located in Pittsburg, Kansas, though it’s unlikely that they relocated the factory. They must have had some experience because their line reflected some ambitious new designs, including solids, thinlines, basses and one acoustic.

Included among these new guitars was this thinline 12-string. Other than the shape and the bizarro headstock, this has all the hallmarks of a typical Holman-Woodell guitar. Like the others, pickups are marked “Channel A” and “Channel B.” The bolt-on neck is medium thickness with a round profile, again typical. The German carve on the top is interesting. The plastic bridge saddles are also common. However, the biggest giveaway are the Holman Sensitone pickups. These were Holman’s own design. They were single-coils that had the interesting feature of being height-adjusted by installing thin plastic plates or shims over the pole pieces. To make the lead pickup higher (or, conversely, the neck pickup lower), you simply added (or subtracted) another plastic plate. Probably the only time such a novel method has ever been used. Thank goodness! The only thing more annoying than the pickups’ adjustment method was their crappy output. There was more than finish flaking that caused Holman-Woodell guitars to bomb. I’d love to tell you how amazingly swell this guitar sounds, but weak 6-string pickups on a 12-string is even funnier.

These are no doubt rare guitars. This is the only Alray I’ve ever seen. Except for the electronics, it’s really not a badly made guitar. Better than most contemporary Kays or Harmonies. In any case, it appears that the Holman-Woodell factory closed down in around November of 1967.

I’m sure the closing of Holman-Woodell was no joke to Howie and Vic or Al and Ray. But even though this guitar is little more than a footnote to American guitar history, it does reflect a serious attempt to make guitars in Kansas. Look at it this way, the next time you’re with your friends and decide to play old Byrds tunes, a guitar like this one will give you plenty of laughs.