Now, here’s a piece of guitar history that proves there’s more than meets the eye, a circa 1967 Cameo 1402T! It wasn’t that long ago that violins were considered the superior cousin to its distant relative, the guitar. You know: violins equal classical music equals high class. Guitars equal popular music equals you dancing fool you! I actually was a guitar teacher back in the ’60s and ’70s and that was the attitude back then. All this isn’t so clear nowadays, when fiddlers amplify their axes to play rock! In any case, it shouldn’t come as any surprise that, with all that cultural tension going on, back in the daysome wag should take a swipe back by casting a guitar in the form of a fiddle!

Actually, the history of this back and forth between violins and guitars goes back at least to the 1880s and involves another cousin, the mandolin. Back in around 1880 a group of performers named the Spanish Students were all the rage in America. They were a mandolin orchestra and before long there were local copies everywhere, soon followed by banjo orchestras, all usually including guitars. Mandolins have bent or arched tops. What followed was some pretty interesting competition as instrument makers started coming up with variations to woo players of different instruments. This is how the tenor banjo came about. Anyhow, into this mix plunged Orville Gibson in the 1890s with his carved top mandolins, emulating the violin. Later came his harp guitars and then Spanish guitars. Then finally his archtops in the 1920s. Similarly, there were other guitarmakers like the Larson Brothers who stressed or bent their tops somewhat like a mandolin. By the 1930s it was commonly accepted that arching the top of a guitar – either by carving or bending – added to the output volume and most makers were producing violin-like guitars, including Kay which made some model with the top and back extending out with a lip like a violin. 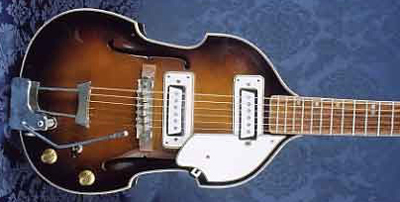 The notion of shaping a guitar to look like a fiddle comes from the bass side of guitardom. In the late 1940s Everett Hull started amplifying his double bass with an amplified peg – Ampeg. By 1953 Gibson was producing its violin-shaped Electric bass. By ’56 Hofner in Germany was producing its version, what would become known as the Beatle Bass thanks to Paul McCartney. It was the Europeans who ran with the idea, and by the early ’60s a number of companies were producing both basses and guitars shaped like fiddles. In around ’64 or ’65 Italian-made EKO violin guitars and basses started coming into the US.

These violin guitars became EKO’s most popular models, so it was only a matter of time before the Europeans’ chief competitors, the Japanese, should come out with their own violin basses and guitars. They embraced the concept with gusto and soon an avalanche of fiddle guitars started emanating from most Japanese shops!

Who sold the Cameo seen here is unknown, but it’s identical to the Aria 1402T made by or for Arai in Japan. Japan had a virtually indecipherable system of production and exportation back then, with any number of large (or small) shops that built the instruments and another trading company that sold them to distributors in the market country. By the late ’60s one of Arai’s main suppliers was the legendary Matsumoku factory in MatsumotoCity, so it’s possible this came from there, but who knows? All the appointments are the same as on the Aria version, down to the trapezoid-topped pickups.

What we can say for sure is that this guitar is a bit below a Hofner in grade and certainly as good as an EKO. Violin guitars like this Cameo are light-weight and really comfortable to play. Back in the ’60s when this guitar was made Japanese guitars, and especially their pickups, were pretty much a joke to serious guitar players, but looking back these are really not that bad as long as you can deal with the chance for feedback!

So, next time you pick up a violin-shaped guitar, you’ll know it’s about a lot more than Sir Paul. Take that violin players!