I was going to do this month’s piece as a continuation of my last piece on Magnatone amplifiers. But, as life so often does, it has intruded and a piece I was going to buy for said article fell out of my grasp until next week, when it will be too late to have a new column. Hence, this piece, which will have to hold its place in the rare and oddball guitar column world until next month.

So, what could possibly take the place of an overview of the 5 major periods of collectible and not-so-collectible Maggie amps? Why something from Fender, of course.

Fender?…I can hear you say: Oddball? Fender is the Ward Cleever of the guitar world. The Mr. Suit and Tie, super reliable but nothing odd at all about them company in guitar manufacturing. Well, that’s true, if you’re taking your Tele reissue and your Silverface Twin out for a weekend ride at a club. Great stuff, but hardly oddball. But Fender did have some very cool misses along with their many hits over the years and some of these are under-appreciated gems. Some are crap—like those toxic oil tank effects units that can poison you if you open them up for maintenance, but some of the products are great vintage pieces that aren’t catching “Fender” money on the vintage market. 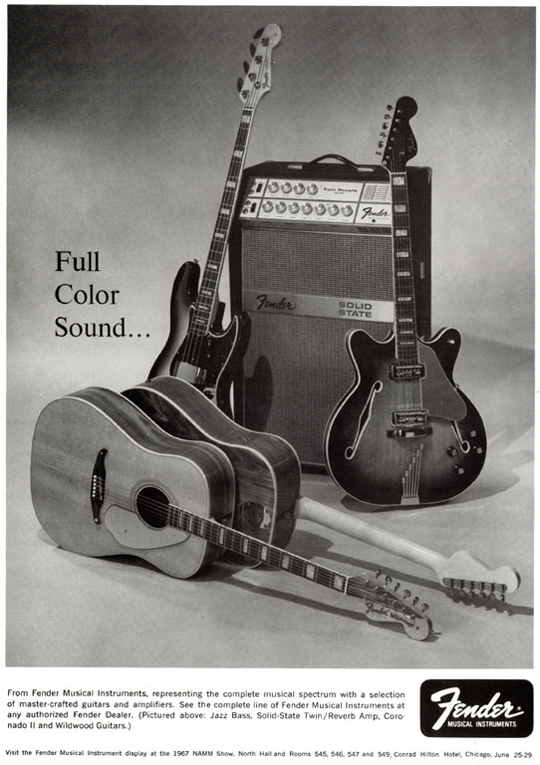 Case in point? This 1967 Fender Wildwood acoustic guitar. In the mid 60’s, with Roger Rossmeisl (who had earlier done some great designs for Rickenbacker) at the head of design, Fender tried to break in to Gibson and Martin territory with their Coronado models (aims at Gibson’s 335 and other hollow and semi hollow guitars) and their acoustic line (aimed at both industry standards in those fields: Gibson and Martin). The models included The Kingman, the Concert, the Malibu, Newporter, Palimino, Redondo, Shenandoah and the 12 string Villager. The Wildwood VI was essentially a top of the line Kingman with the Wildwood added.

They were both pretty much flops from the get-go. The electrics used (for the first time in Fender’s history) out-sourced pickups from DeArmond. And no matter how sweet these may sound on your Harmony hollows, they squealed up a feedback storm in the late 60’s. Remember, this was the time when amps were getting bigger and bigger…put any DeArmond-loaded guitar in front of a 100 watt stack and you’re in for trouble. But, remember, too, most people are using 40 watts and below these days, so the Coronado’s reputation as a feedback monster isn’t so cut and dried as it might seem.

But, again, they weren’t right for the market—or maybe people just weren’t ready to accept Fender as a hollow body or acoustic guitar maker. No matter what the reasons, they flopped, badly. In a last gasp attempt to keep the lines moving, Fender introduced the “Wildwood” series. These were trees that fender injected dyes into, and then used the wood in various wild and wacky colors in the guitars. Why they couldn’t have just stained spruce and mahogany is beyond me, but, hey, if they wanted to inject their own Fender Forest full of dye, what’s it to me.

All of this made for some pretty radical looking guitars. Acoustic guitars with bolt-on necks, six on a side tuners and “wild” wood on the back and sides? Very oddball. But how do they play and sound?

Well, first of all, they are the best playing acoustic I’ve ever played. Anyone who’s primarily an electric guitar player should fall in love immediately with these acoustics. The necks are pretty much the same necks off the 1966 Jazzmasters (with the block inlays). They play like…well, they play like electric guitars. Thin, fast necks, great action and responsiveness. A true joy to play.

And how do they sound? It may be an acquired taste, but I love their sound. Much brighter than, say, a Gibson Hummingbird (but, then again, the Wildwood IV is the only acoustic I’ve ever played that plays easier than a Hummingbird). And, if it’s brighter than a Gibson, it’s probably a lot brighter and not as booming as a Martin dreadnaught, right? But these Fender acoustics occupy their own sonic space very well. They cut through a mix and they have a very nicely balanced top and bottom (not a ton of mid).

So, if you’re an electric player looking for a really cool looking, sounding and great playing vintage made in the USA acoustic, you could do a LOT worse than picking up one of these oddball Fender Wildwoods. In great shape, they’ll still run you from $400-1,000, depending on the model. They aren’t your standard Fender fare—but try one out—you won’t be disappointed.