Who among us doesn’t relate to Nigel Tufnel in This Is Spinal Tap when he tried to explain to “Meathead” that having an 11 on his amp made it louder than – and hence superior to – one having a mere 10? That’s just how I felt back in the day when, after nearly two decades of owning one – that’s only one – guitar, a classical, I decided I ought to get an electric guitar again. Who could have known how slippery that slope would turn out to be?! This was back in the days before the internet and eBay, when there were little shops in out-of-the-way places where you could find used (they weren’t even “vintage” yet) guitars. In the front would be nice, expensive guitars by Martin or Gibson or some other premier company. Then tucked away at the back of the rack would be the goofballs, guitars of unknown origin with strange names and often stranger looks. That was where I got hooked, at the back of the rack.

I met my Waterloo at a place called The Trading Post at the Pennsauken Mart, one of those East Coast predecessors to the modern mall, made of cinderblock and full of exotic stalls. But instead of Penney’s and Victoria’s Secret, you would find a butcher, gun shop, Polish imports, dollar stores, short-order counters, and the Trading Post, a kind of quasi pawn shop where you sold stuff, but couldn’t retrieve it unless you bought it back. Almost by instinct I threaded my way past the Fender Strats to the back where I saw this Kent guitar. It had a gorgeous burled maple front and back and really cool black and white celluloid on the sides, giving it the cachet of an ancient Baroque guitar. It even had a real Bigsby. But best of all, it had 4 – count ’em, four – pickups! It had to be better than one with just three! And, at $89, it was priced right. 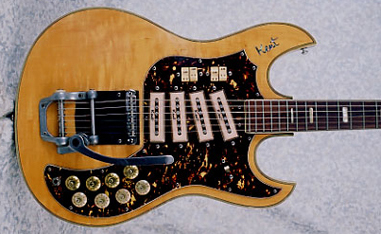 But where the heck did this guitar come from? I learned later it was a Kent Model 742, made in Japan in 1967. Kent was the brand name used by Buegeleisen & Jacobson (B&J), once a major music distributor in New York City. B&J was one of the early companies to begin importing musical goods from Japan in 1960, starting with microphones and aftermarket pickups, and adding guitars in 1962. By the time this Model 742 was built the guitars had graduated from relatively primitive mahogany planks to sophisticated laminates and trim. Earlier Kents were made by Guyatone, but it’s unknown who created this glam job.

The Model 742 is a beaut. But do the four pickups make it better? Well, alas, poor Nigel, more is not necessarily better, except maybe in the looks department. Indeed, these admittedly handsome pickup units just may have been the worst ever produced! Plus the guitar is wired so that playing all of them decreases further the already crappy output, making the onboard mute switch kind of superfluous! And, maybe they could have used some help on the truss rod design. Ok, so the Kent won’t power my Ventures tribute band. But if its fancy burl, Baroque rally stripes, and especially four pickups hadn’t grabbed me from the back of the rack that day in Pennsauken, New Jersey, I’d never have discovered my love for bizarre guitars and begun my long journey into the dark recesses of guitar history. That makes this Kent an 11 on my list!