Rare is, of course, a relative term when you’re talking about anything made by Danelectro for Sears. This ain’t a hand carved arch-top by one of the D’Whoever’s in New York, or a prototype KOA wood, only ever seen by Ted McCarty and the 33rd-level Masons who know the secret Skull & Bones handshake and Vulcan death grips, after all. 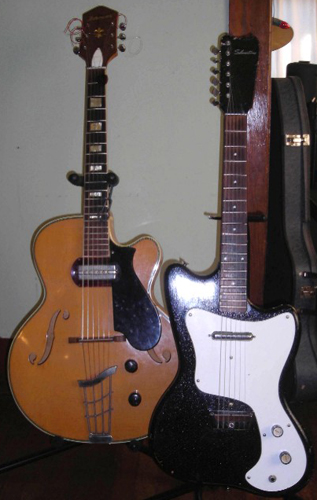 These were cheap, crap box guitars made at a price point to that every kid who saw the Beatles on Ed Sullivan could get one for whatever holiday or birthday was next. They were product, churned out at an alarming rate. They were also, lucky for us, pretty damn cool sounding little guitars.

So, a “rare Silvertone” is a bit of an oxymoron. The best Michael Bay film. A tall jockey. The thinnest sumo wrestler. The most competent politician in Washington. The least annoying morning DJ, and so on.

But by 1968, the post-Beatle guitar boom of 64-66 had waned. The wave had crested and you started to see some of the biggest names in little guitars (Kay, Valco, Danelectro) starting to suffer and, within a year, all die quiet deaths. (Chicago enormo-manufacture Harmony would slump on into the early 70’s before limping to a public auction death knell in 1975).

In their last years, all of these companies would make some changes, hoping desperately to cling to their former market share. In Dano”s case, the biggest change when ownership switched hands to MCA in 1966 was the end of the poplar and Masonite guitars that had so defined the Neptune maker”s sound for over ten years. The last year and a half, Danelectro produced actual WOOD guitars, the top of the line being the classic 3 pickup Vinnie Bell signature model with the wonderfully psychedelic pickguard and the zippy quick neck.

The bottom of the line? The wood one-pickup Silvertone model from the Amp-in-Case line. This was still called the 1448 in the 1968 SEARS catalog, but it is a slightly different sounding little beast from its earlier and more prevalent semi-hollow 1448’s. The AC/DC (sans power transformer) amp in the case is the same (not nearly as cool at the great 1457’s single-ended 6V6-driven amp with tremolo. BUT, this guitar is arguably a better little axe than its predecessors. It’s at least as good and different enough that you should get one if you can.

It’s a killer blues and garage guitar. The skate key tuners hold surprisingly well, so long as you drop some graphite (or the lube of your choice) on the sticky, but great sounding, aluminum nut. The rosewood bridge is just like on the older models… simple, but effective. And, of course, the key to the tone is still there – the brilliant lipstick tube low-output (with plenty of volume…ohms ratings and volume are not the same) Danelectro pickup is worth all of the hype it receives. There’s just nothing quite like them, and if you want that full voiced twang and snap…well, you need an original lipstick Dano. There is truly no substitute.

And in a wooded solidbody, rather than the more common (and great, make no mistake) hollow Masonite-topped models, the pickup really shines. Crank your amp and turn up the guitar volume for some great smooth overdrive. Roll back the volume knob and the guitar cleans up, while retaining its treble response (unlike many great vintage garage guitars like Harmonys, which get muddy and murky very fast with their original volume knobs turned down at all). This is a clear, clean and articulate tone monster that responds well to every amp in the house (at least in this house of too many amps, it does).

The short scale makes for easy playing, smooth bends and surprisingly good intonation up the neck when set up well. Plus, this model, like later Danos, has a very cool, very figured fretboard for a “budget” instrument. And, of course, it comes, like its older Masonite siblings, in a wonderfully cheesy black metaflake finish.

This is one pawn shop surprise you should pick up when and if you see it. Like I said, they’re rare – or they’re “Silvertone Rare” at any rate. They show up on eBay a LOT less often than the standard, more common 1448’s, so if you see one in good playable shape, do yourself a favor and dig this last-of-the-breed from Neptune.