So, we’re all guitar geeks here, right? And this quest for tone we’re all on is (or should be, at any rate) about the music that comes out at the end of the search. So, this month, I wanted to add to my normal column about great guitars and amps full of tone that have slipped under the mondo-expensive collectors’ radars an album worthy of revisiting. Or, for those of you who never heard it in the first place, an album guitar geeks (and lovers of great songs) should own. 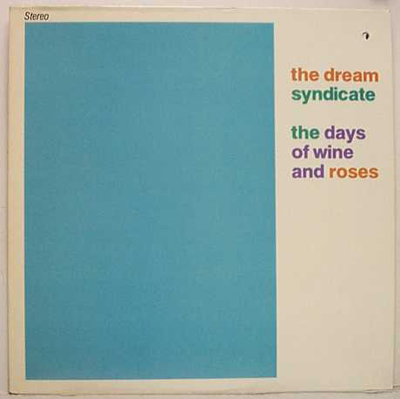 The Dream Syndicate: The Days of Wine and Roses

Released in 1982 the LA band The Dream Syndicate’s first full-length LP (remember those?), The Days of Wine and Roses, has stood the test of time and deserves to be hailed for what it is: a classic album of that most democratic of music forces, Garage Rock. Ever wonder what Bob Dylan might sound like had he fronted a band composed of half of Neil Young’s Crazy Horse and half of The Velvet Underground? Well, strap in, because you’re in for a ride.

The Dream Syndicate’s front man and main songwriter was Steve Wynn (not the hotel dude) – a man still making great records 20+ years later with his current (and great) band Steve Wynn & The Miracle Three. I have seen the Stones, The Allman Brothers, Wilco (Nels Cline and Jeff Tweedy are a fun pair these days…a great night out for guitar lovers, btw) Crazy Horse AND Television live (I told you, I’m a guitar freak), and I have never seen a better live twin guitar attack than Steve Wynn (and fellow guitarist Jason Victor) and the Miracle Three threw down last year in LA. Fueled by a great rhythm section of Dave DeCastro on Bass and Linda Pitmon on drums, this is one of the best live bands going right now.

But, back, for a moment, to the way back machine.

The Days of Wine and Roses ranks as one of the few timeless releases of the 80’s. If you listen to it today, there’s nothing on it that tells you whether it was recorded in 1968 or 1982 or 2006. It’s fresh and primal and raw and melodic and the guitar work is some of the best and most interesting you’ll hear. From the great, murky and melodic slide on “Too Little, Too Late” (think George Harrison on Quaaludes, or if Hubert Sumlin joined the Beatles), to the savage unhinged noise fest of the amazing jam out title track, the work by Wynn and original Syndicate guitarist Karl Precoda is as fresh today as the day it was cut. It’s like if Dylan rocked more, or if Sonic Youth knew how to write catchy songs.

The twin guitars here are majestic in their ability to go from quiet drone to the unbridled passion of the outer edges psycho beauty. If you like guitar, you will LOVE this album. I promise.

It opens with a hypnotic riff on “Tell Me When It’s Over.” The song has a central guitar figure drenched in distortion that drives the song. Next, the adrenaline rush of “Definitely Clean,” which recalls the life-on-the-edge early electric rollicking of Dylan on “Mixed Up Confusion.”

“That’s What You Always Say” starts with a fabulous seductive bass line (played by original bassist Kendra Smith), building with chimey guitars and Dennis Duck’s great drum work (Wynn has been blessed with great drummers – from Duck, who still performs with LA’s Human Hands, to his current Miracle Three timekeeper, the great Linda Pitmon), before a cresting wave of guitars takes over. “Then She Remembers” is something like folk rock pushed to its breaking point.

Next up, the only Precoda-penned number, “Halloween.” With a solo that’s worthy of Tom Verlaine (rarely has the plinky bell-like ring of a Jazzmaster been better used in rock than by Wynn on this record), the song rises and falls in a celebration of dynamics (something any band could and should learn from). As Keith Richards once said, “If music is painting, then silence is the palate. You have to remember the silence.” THIS is a band that understands quiet and loud and melody and dissonance. It’s one of the richest records to ever come out of a barely produced band (and I mean that in the best way). The album is cut largely live, and it drips with the energy of immediacy.

“When You Smile” opens with Wynn singing over a simple two-notes on guitar while Precoda squeals menacing feedback in the background (and, at times, foreground). This contains one of the best guitar solos on the record – a thick, syrupy-sounding Precoda playing a mid 60’s Harmony made Silvertone with infectious melodic style. The murky mix of Precoda’s tone with Wynn’s Fender chime is a delight throughout. The two guitar voices speaking together, rather than the standard, “you play rhythm, I’ll play lead” predictability most two guitar bands fall into. “Until Lately” sounds like an outtake from Nuggets, or maybe an undiscovered tune from Iggy and the Stooges Funhouse.

The haunting, lovely Smith-sung “Too Little Too late” leads us into the last cut – the title track. The song rocks, the band is in top form, and the guitars speak as a punctuation mark to one of the great guitar-led albums from any era.

If you love guitar, and you love great songs (and here I am defining great songs as those written by the likes of Bob Dylan, Neil Young, early Lou Reed, Exile On Main Street period Rolling Stones, Tom Waits and Television), do yourself a favor and pick up this neglected classic of guitar brilliance. And double the favor you do yourself by catching up with the great work Wynn continues to do – he’s one of our great songwriters, and more people should know it. The man rocks. And this is one of the greatest rock albums of all time.

2 thoughts on “Under the Radar: The Dream Syndicate”