People who aren’t hooked on guitars are probably not aware of the medical fact that guitar lovers can be highly susceptible to whiplash. I still get a pain in my neck when I remember the first time I saw this Sekova Grecian calling to me from the back of the rack at MusicCity in Newark, NJ, like some sensuous, mythical Siren. You’re walking by glancing at the wall of guitars and your head snaps around as you yell, “What the hell?”

MusicCity at the time I found it, by the way, was known to a select few as the first Temple of Doom. Sitting on the edge of a down-at-the-heels downtown, it had once been a large regional musical distributor. It had four stories, the upper floors of which were loaded with dusty, unsold new-old-stock musical gear, some going back three or four decades. New, in-the-box ’60s Kapa guitars and ’70s Maestro pedal effects were among the treasures I pulled off the rough plank wood shelves. 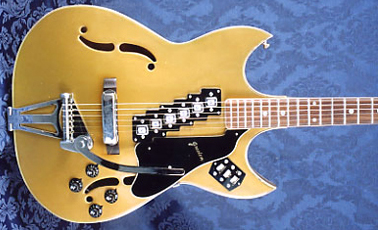 Not much is known about Sekova guitars. They were imported from Japan by U.S. Musical Merchandise of New York City, one of many music distributors that once thrived in that fair city. Who actually made Sekovas in Japan also remains a mystery, but it’s similar to a Greco 921. Greco. Grecian. Geddit? Many, if not all, Grecos were built by the great Fuji Gen Gakki factory, the company that made most classic Ibanez guitars, so perhaps that’s where this originated. The aesthetics of this exotic beast probably place it from around 1968 or possibly slightly earlier. Both the fish-fin headstock, a Kay knockoff, and the gold finish would be plenty enough to do damage to your neck muscles (a lot of these have turned green with time), but the real clincher is the pickup system. Now, a lot of guitar designers have played around with pickup placement. Some tilt the neck pickup backward on the bass side. Others tilt it forward. Some have even used individual poles and coils for each pickup, but no one has come up with such a novel layout as the Sekova Grecian! I can’t say there wasn’t a lot of scientific measurement of frequency response to determine the placement of these units, but I suspect it was more like one of those “Wouldn’t it look cool if” kinds of decisions!

In fact, the electronics were designed to give a kind of stereo effect, with the three bass pickups controlled by the Mic 1 switch and the treble by Mic 2, with a Mix switch (all), put out through a stereo jack.

Whether or not there was method to this madness, it didn’t work. As cool as it looks, this Grecian formula sucks big time. The stereo idea wasn’t terrible, but you always had to have two amps to take advantage of it. Plus, the coils are just not big enough to crank out much sound and, like so many Japanese guitars from this era, the wiring is extremely thin and the pots are crummy, so you’re lucky if the thing plays. That being said, the Sekova Grecian is still a boss guitar. Once you strap it on, it’s sure to turn heads, so you can share the whiplash!