Sometimes you take a look at a guitar and the warning bells start ringing: bogus. Like those early “missing links” proposed by inventive amateur anthropologists who put gorilla skulls on anthropoid skeletons. That’s what happened to me the first time a dealer hauled this out and showed it to me. It was a Danelectro alright, but those pickups? Then I looked again. Who would stencil “Dan Armstrong Modified Danelectro” on an aftermarket pickguard? Then there were the pickups. Epoxy potted. Trademark of who, or is it whom? Dan Armstrong. Think his Ampeg see-through guitars. No, on second thought, this had the air of a mystery wrapped in an enigma with a generous dash of authenticity. So it proved to be. And so it came my way and all I had to do was put the links back together again.

Turns out Danelectro, like every other musical instrument company, got caught up in the corporate feeding frenzy of the 1960s. Danelectro had its origins in electronics work done for a department store by Nathaniel “Nate” Daniel (born 1912) in the Bronx in the 1930s. He came up with his own amplifier design and from 1934-42 made Epiphone’s Electar amplifers. After World War II Daniel moved to Red Bank, New Jersey, and founded Danelectro, building amps for Montgomery Ward (Airline), Sears (Silvertone), and Targ and Diner (S.S. Maxwell). In the early 1950s, when solidbody electrics demonstrated that they were more than a passing fad, Sears wanted more guitars than its subsidiary Harmony could produce and arranged for Danelectro to start making electric guitars. Danelectro and its Silvertone counterparts debuted in 1954.

The first Danos were solid, made of poplar. In 1956 the legendary “lipstick tube” pickups appeared and yes Martha they were purchased from a lipstick manufacturer! In 1958 the classic masonite hollowbodies took a bow, the same year Danelectro relocated to Neptune, New Jersey. 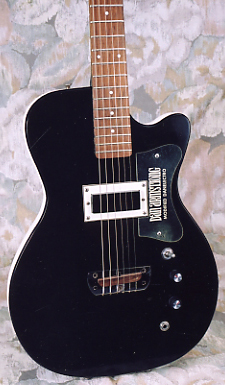 Fast forward to 1966. By then guitar companies could sell any guitars they could make. A number of large corporations, many with experience on the periphery of the entertainment business, started seeing dollar signs and began acquiring guitar companies. CBS purchased Fender in 1965. Norlin, whose interests including breweries (I guess that’s entertainment!), bought Gibson. Baldwin Pianos and Organs bought first Burns of London and then Gretsch. Even Westheimer Sales, importer of Teiscos, was purchased by King Korn trade stamps. Seaburg, the juke box folks, bought Valco/Kay. Avnet bought Guild. Danelectro was purchased by MCA, the company that owned Decca Records and Universal Pictures, among other properties.

Unfortunately for all the greedy corporations, the bloom started to fade from the guitar business almost immediately. According to the Music Trades magazine, guitar sales began to decline in 1967 followed by an even bigger drop in 1968. That year Valco/Kay went belly up. MCA wanted out, but there were no takers to buy the brand. In 1969, MCA simply locked the doors of the factory and that was it.

Which links up with this guitar. Dan Armstrong was a well-known repairman nee guitar designer who had a shop in New York. He and his then girlfriend Carly Simon came up with this idea for a plexiglass “see-through” guitar which would be sold through another area amplifier company, Ampeg in 1969. Armstrong was hired to personally inspect every guitar before it left the plant, but, reportedly, Armstrong was, shall we say, not very interested in showing up for a regular day job shift. Ampeg had trouble meeting demand for the plexiglass guitars and basses. There may have been other production problems.

In any case, a part of the Ampeg design was a series of interchangeable pickups that slid into a slot on the front. These were cast in epoxy to help cut back on feedback.

The rest of the story is a little murky. Some sources say that Armstrong purchased a bunch of leftover parts from the closed Danelectro factory and assembled between 650-700 guitars outfitted with his epoxy-potted pickups. Some stories link this to Ampeg’s supply problems, but why they don’t then say Ampeg is a mystery. Other stories have these guitars being sold out of Armstrong’s New York shop, which probably makes more sense, given the identification on the pickguard. One interesting clue is that Ampeg used Danelectro bridges on its see-through guitars. This has always struck me as odd, that such an advance guitar concept wouldn’t have a sophisticated bridge.

Somehow, this all ties up with the fact that Unimusic, Ampeg’s parent company, ran into financial troubles about this time. They couldn’t pay Armstrong. Had Ampeg purchased those Danelectro parts to use the bridges and save money? Did Armstrong get the parts to make these guitars as part of the pay Ampeg couldn’t give him? We may never know the whole story.

All this came tumbling down in 1971 when the Ampeg see-throughs bit the dust. Along with the company. Ampeg was sold to the consumer electronics giant Magnavox that year. Magnavox operated the company until 1980 when the brand went to Ernie Briefel’s Music Technology, Inc. (MTI), distributor of Westone and Vantage guitars from Matsumoku Moto in Japan, as well as Giannini from Brazil. In 1985 the brand was sold once again to St. Louis Music, where it still resides.

So, that leaves us with these Dan Armstrong Modified Danelectros. As you can see, they do exist! I’m pretty sure these date from 1969, but that’s far from certain. The timing fits. They could date from slightly later, but probably not much.

Basically everything on these guitars is vintage Dano except for the pickups. They are smooth, rich and quiet. Unfortunately, a Dano really needs cheapo lipstick-tube single-coils to sound right. These high-tech units kind of leave the guitar with no soul. I have no idea what the three-way toggle is supposed to do. It may have already been installed!

Nevertheless, like those anthropological missing links, this Dan Armstrong Modified Danelectro fills in some curious connections between some of our most famous brand names and innovative guitar personalities. Maybe some day we’ll know the whole truth about this oddball.