The Alamo is famous for lots of things. There’s the ass kicking and horrific bloodbath we all had to read about in school back in the day. There’s the present-day tourist trap where said bloodbath occurred (odd when you think about it, really. “Here’s where 50 men were gunned down with as much chance as those quail Cheney “hunts”. And here’s a gift shop!).

There’s the truly great moment of American Popular culture where Pee Wee Herman has to go to the Alamo to find his beautiful and prized bicycle (which, he has been told, is in the Alamo’s basement only to find, sadly, there is no basement at the Alamo). There’s the time Ozzy Osborne was arrested for public urination. The list is nearly endless. 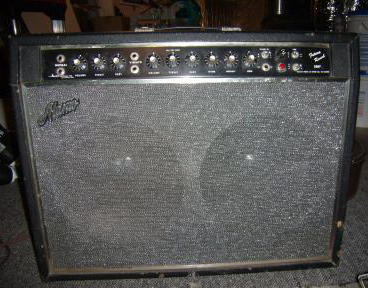 But that’s not the Alamo I’m talking about. No, our Alamo in question is the minor, albeit very cool, guitar and amp company that was out of San Antonio Texas from the late 40’s until their demise in the early 80s. Remember THIS Alamo, because they made some great stuff gear geeks might want to get a hold of.

Exhibit A: This twin twelve Alamo Futura Reverb is a true sleeper of a vintage amp classic. This is one of the greatest amps I’ve ever owned (or heard), and they are out there at still very reasonable prices on the vintage market.

When you’re looking at Alamo amps, it’s a good thing to know that there are three distinct periods: 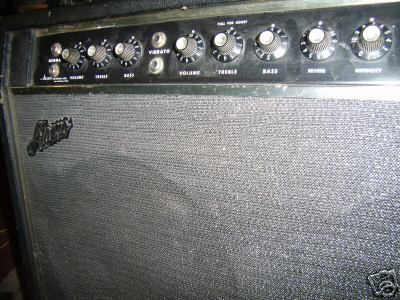 The Alamo Futura Reverb pictured here is one of the hybrids. If you’re going to do a hybrid tube amp, solid state preamp and tube output is the way to go, as you can still get that classic output tube distortion we all know and love. This amp has a 12ax7 phase inverter, and, once the volume is about half way up, the amp drives the 7868 output tubes into a sweet, creamy, lovely overdrive. 7868s aren’t the most common tube but there are plenty of not to expensive NOS ones out there. ALSO, Electro Harmonics has a new one. While I haven’t heard the new one, if it’s anything like Electro Harmonics 6973, it’ll be a winner.

What do 7868s sound like? Well, they are a nine-pin version of the eight pin classic 7591. Electronically, they’re identical to the 7591, which is one of the truly underrated tubes for blues and garage, rock guitar overdrive tones. They are between (both tonally and wattage) a 6V6 and a 6L6, so this Alamo puts out about 25 watts , plenty for small gigs without too loud a drummer or bass player.

You can tell by the control panel that they were looking to look like a Fender Twin Reverb. You’ve got channel one on the left. Then, there’s the Tremolo/Reverb Channel two. The reverb can give you a subtly jazzy ambience and go all the way up to cave-swelling psychedelic, with some fine surf tones in the middle.

The tremolo is among the best I’ve ever heard in an on-board tremolo section. At lower, more subtle settings, you can get 50’s R&B tremolo, but turned up you can get that radical throbbing musical tone from The Smith’s “How Soon is Now?’ It’s a smooth wave not so much of a harsh square wave tremolo that tends to get choppy and helicopter-sounding at the highest intensity setting. This one always sounds musical even at the highest setting. There’s a fine sweep in speed, as well.

Both channels have volume/treble and bass knobs that are very responsive. The verb/trem channel, of course, has added knobs for speed & intensity and depth of reverb.

And while the all-tube Alamos are great sounding (and more expensive) amps, these solid-state/tube output models are incredible sounding and brilliantly designed amps. Because the rectifier, like the preamp, is solid state, the designers intelligently put in a stand-by switch that keeps your power tubes from getting zapped with all the B+ voltage from the get go.

Information on these is pretty scarce. Mine has one alnico CTS and one Jensen Ceramic (which sound pretty nice together, by the way). If anyone knows the original speaker, feel free to drop me a line at: www.myspace.com/robroberge

This is an incredible amp, and still a relative bargain on the vintage market. I plan on getting some of the other models and seeing what else if out there. Here’s yet another great vintage amp that will keep you from getting into that Fender/Marshall everyone sounding alike kind of tone. Dig the Alamo Futura Twin Twelve Reverb model #2567

OK, now I got mine, so I can tell others about it. I was tempted to but three or four more of these before ever writing a column about them, just so I’d have a stash before word got out. But one’s enough. Well, maybe I’ll get a second, but anyway, here is an amp you should own! Start spreading the news.