A lot of yesterday’s “sleeper” amps, the great secret tone machines that only a few gear-geeks knew about (such as Danelectros and the several-branded versions of Valcos—Supro, National, Airline and the like) are now pretty well known and, as a result, are not as cheap as they were say, ten years ago. But there are still some great deals to be found with some of the other lesser-known amps of the 60’s and 70’s.

Among the best deals out there are the Japanese-made Univox tube amps of the mid to late 60’s. There are some rare birds out there that are worth keeping an eye open for, but the one you see most often, among the low-priced, great sounding Univox tube amps, is the U-45B Model. 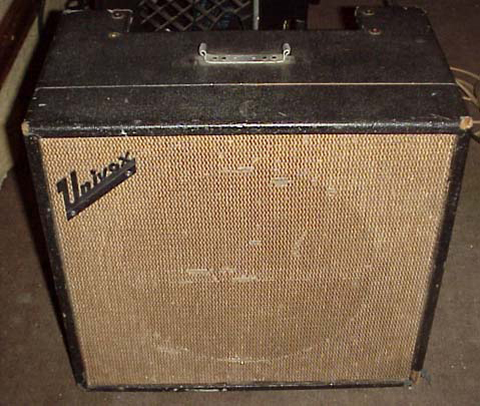 This is a small, incredibly light, and super simple and easy to work on amp that has a great garage and blues tone all its own. What’s not to love? And, while it does employ some oddball tubes, they are readily available and not at all expensive like some of the less common tubes from 1960’s amplifiers.

So, what’s going on with the U-45B? It actually has a lot to recommend it beyond some of the other cheaper vintage amps. The cabinet is solid, and the baffle is made of plywood, unlike, say the cheesy pressboard in an otherwise great amp like the Danelectro-made Silvertone 1482. So, you’ve got, in the U-45B, a fine Jensen 12” speaker that fits tightly and without rattle against some nice solid wood. A nice surprise in a cheapy. Also, the tolex (or whatever tolex-like material is used) on the later, front-controlled version of the U-45B is pretty durable, unlike some of the nice colored paper you might get on some Valco and Dano products.

The tube line up of the amp is the rather unusual 12AX7, 6BM8, 6BM8, 6X4. It’s rated at 10 watts. The 6X4 is an easy to find rectifier. What’s odd about this amp is that the 12AX7 isn’t used as a preamp tube but, rather, as the tremolo tube. The less common 6BM8s are used as both preamp and output tubes. 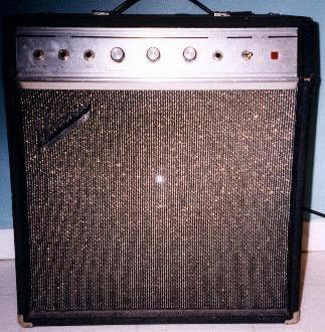 The control panel (on the top in early 60’s versions, on the front in later models—otherwise, they are the same amp) is about as simple as it gets. VOLUME. TONE and SPEED (for the tremolo, which has a nice deep set depth).

How does it sound? Well, pretty great. You can get some very fine clean tones when the volume is under half way, from a jazzy laid-back tone, to a twangy rockabilly sound. It’s great for recording. A quiet, smooth sounding amp on its clean settings, but where it really comes alive is when it’s pushed into overdrive. At 10 watts, with a 15 watt Jensen 12”, it really excels for recording rock guitar or for a quiet(er) jam with full-throttle tone. It’s around 15 lbs, yet it’s built solidly and it sounds great. It’s an amp you want, and you can find them, with stunning regularity, for under $250…frequently for a good deal less. 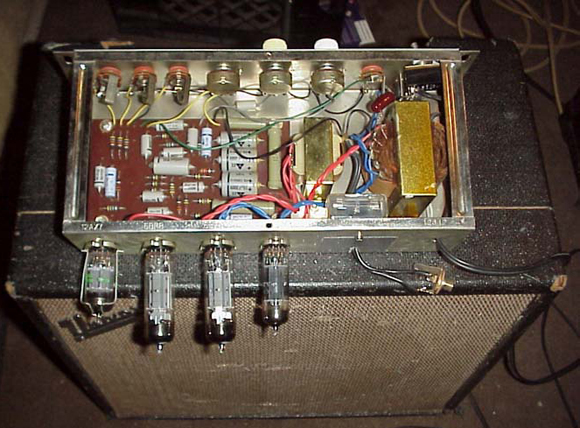 The tremolo is rich, with a nice range of speeds. The only possible downside to the amp? It has a rather dark voice which offers plenty of sparkle while using a Tele, but it can muddy up a bit with a darker voiced guitar like, say, a Supro Dual Tone. An easy, non-mod fix for this? Any boost pedal gives it plenty of sparkle. (My home-made OC71 Germanium boost gives it a rich, harmonic sparkly push…awesome). But if you want to totally retain the tone of the amp and the voice of the guitar, use a simple EQ pedal, and you can dial in a little more treble, while keeping the basic character of the amp.

This is a great amp. It was also (with the exact same components from the same factory) marketed/labeled as a Lafayette, a Cavalier—and also marketed by the Hilgen brand under the model name Meteor. Most Hilgens I’ve seen (hardly a scientific sampling, but, still…) were made in New Jersey, but, for a time, the company apparently imported SOME of their amps, and the one I’ve seen the most of, among the imported Hilgens, is their Meteor branded amp that is the same, guts-wise, as the Univox U-45B.

So why haven’t these caught on in the vintage market? Who cares, but why not take advantage of it while they’re still cheap?

Next month—more on some of the even more rare Univox’s, like the U305 with the 15” speaker, or some of the more rare 2X10” amps with 6973 output tubes and more! Meanwhile, search away.