Some guitars are just too strange for most people to take, so they don’t. They sit there at the back of the rack forever, daring you have the cahones. That’s what this Morris Custom did to me for about a year. It sat up in the most wonderful guitar shop ever called Torresdale Music, a tiny corner storefront in the working-class Philly neighborhood that shared the name. Torresdale was like something out of Dickens, with amps crammed around the perimeter and high in the center and guitars hanging or stacked everywhere else. Owner Marvin Povernik scoured flea markets and thrift shops to find his stock and it was impressive. I’d walk in and say, “Marvin, I need a Kustom amp,” and he’d reply “Pull those out under there, I think there’s one in back.” There was.

Marvin found this guitar at a flea market and he refused to part with it cheap. But I had Marvin’s number. On one guitar, he knew his cost and he knew what he wanted firm. But if you bought three guitars and presented a lump sum, his math skills went to hell, and you could walk out with a real deal. Instead of $300 he saw $600 and forgot that it was for three guitars! That’s how I transferred ownership on this beauty. 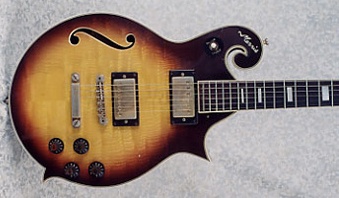 And what a beauty. Morris is the brand name used by a large Japanese manufacturer called Moridira. Little is known about their history, but by the mid-’70s they were a minor part of the Copy Era, though their forté seems to have been in acoustics. Many guitar fans think of the Copy Era as a time when Japanese companies made cheap knock-offs of American guitars and sold them to kids who couldn’t afford the real thing. Some truth, but many of the Japanese makers built excellent guitars and already by 1974 they were innovating. None more so than Ibanez, whose guitars by then were made by Fuji Gen Gakki. Maple fingerboards on Les Pauls, tree-of-life fingerboard inlays, varitone switches, all Japanese innovations. Perhaps the most famous was the Ibanez Custom Agent, which took a swell set-neck Les Paul, gave it fancy inlays and a cool pickguard and topped it with a head shaped like a Gibson F-5 mandolin.

This 1975 Morris Custom attempted to do the Custom Agent one better by using an F-5 body shape as well! Featuring a killer flametop and a mahogany body, the Custom is semi-hollow. The neck is mahogany and set in, with a bound ebony fingerboard and big, real pearl inlays. The humbuckers aren’t Gibson quality, but they’re fine. This guitar plays like a dream, and it’s less than half the weight of a solidbody, which my back likes a lot.

Alas, like so many things, Torresdale music is no more. Marvin had diabetes, but refused to give up a steady diet of cheesesteak sandwiches from Chink’s up the street. Chink’s – periodically the object of controversy because of its politically incorrect name – is a little malted milk parlor whose booths make you feel like you just stepped back into 1940 and that serves up renowned steaks. Bruce Willis always orders them when he’s shooting a movie in town. Marvin’s health deteriorated and the shop was sold, its many wonders dispersed into suburban music stores. The store is now a hairdresser. But at least I have the memories, and the Morris Custom now calls to me from the back of my rack!

Those not lucky enough to own the rare Morris original, can at least comfort themselves with the Eastwood 1975 Morris The Cosey tribute, which is an excellent guitar in its own right and won’t disappoint. Watch this demo: