OK, so we’d played the night before at the Bluegrass Barn Jam in Rosine and we were on our way to check in at the “Big E” (that’s the Executive Inn in Owensboro, KY). The Pests were squawking about being hungry, per usual, so I dropped them of at the Dairy Queen. While the Pests downed a quick lunch, I grabbed a few instrumental odds & ends from the van and walked across the parking lot to the building with the huge sign, “Consumers Mall”. It’s one of those former discount stores, now indoor flea market which are popping up across the land in abandoned K-Marts, grocery stores and so on. One of the missions of our little band was the rescue of abused and/or neglected guitars, which we found on our journeys and there was a candidate for rescue inside. 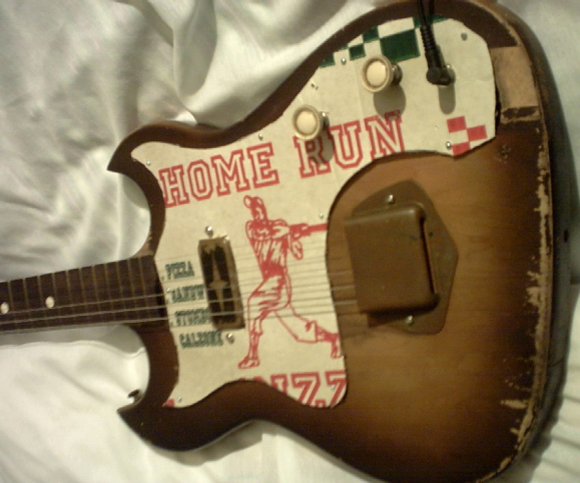 I guess I should explain who we are first. We are Buddha and the Pests, a group of itinerant musicians who play together whenever the mood or money moves us. Lately we hadn’t seen a lot of movement so the gig at the “Big E” was a blessing. I’m Buddha, the lead singer, songwriter, rhythm guitar and quasi-leader of the clan. You’ll meet the other guys later as they join the stories, but yes, one of our hobbies or “missions”, as Reverend Right calls it, is the rescue of abused instruments. You know the ones I’m talking about. The ’59 semi-acoustic, electric Kay that someone spray painted flat black and decorated with skull and bullet hole decals. Or the ’66 Fender Mustang that someone covered with Elmer’s glue and then sprinkled with a generous dose of silver and gold glitter. Yeah we like to save these orphans and try to rehabilitate them when ever possible.

I’d seen an old beater in the mall the week before, but hadn’t had the time to check it out. Hopefully it would still be there. I worked my way back past the piles of odds & ends, old lamps, tube radios, junk, store fixtures, etc back to Frank’s booth in the very rear of the building. And there it was, lying on top of a stack of old speakers. I’d noticed it there before, but had never really looked at it closely. It appeared to be an old American or Japanese electric guitar from the early 60’s, one of the thousands cranked out in some factory and sold at Sears or Western Auto stores back then. It may have been a mail-order birthday present from “the World’s Largest Store” that made a young West Kentucky boy jump for joy when he ripped open the package for which his parents had scrimped and saved for so long.

It had been a shiny brown sunburst, the color guitar folks call ‘tobacco brown’, but now it was a little worse for wear. It was covered in a layer of dust, but that was the least of its problems. The white pick guard had been broken to pieces and part of it was missing. The electronics-(the pick-up, jack, tone and volume control)-were lying in the hollowed out cavity of the body. They were faded and slightly rusty, but they might still work. One major problem was the piece of bright yellow adhesive tape with the scrawl of $25. There was no way that was gonna happen, at least not from me. If it was all in one piece and not too banged up I might give the ‘list’ price, but not in its sorry state. I’d determined that I would work out a deal for the guitar provided I didn’t have to fork out any actual, physical cash. I could then clean her up and bring her back to the land of the living or at least hang her on the wall.

Frank, the proprietor of this particular stall, preferred cash money but as this piece had been sitting for over a year he might just deal. Amazingly he agreed to swap even for a ¾ size children’s guitar which I’d picked up at a yard sale for $4. What a deal-and no actual cash changed hands! I was quite pleased with my trading prowess. However, on reflection this may have been Frank’s version of what they call in the retail industry a loss leader. You know the 24 rolls of Wal-Mart toilet paper for $3, which is a great deal, but then you wind up spending $37 on junk you never planned on buying in the first place. I left Frank’s booth with the beater and with an early 60’s Teisco bass, but that’s another story. Oh, I also left a trombone and a small chunk of change. Grrrrrrr.

The Pests were standing around in the parking lot at the Dairy Queen:  smoking, farting and discussing the set list for tonight’s show. They looked at my finds, shook their heads in dismay and piled back into the van. I dropped the Pests off at the Executive Inn and then headed for home planning out how to rehabilitate my new patient. I had a couple of hours before I had to get ready to play so I thought I’d jump in to the rehab. The first step was to try to clean off some of the accumulated years of grit and grime. I found an old pizza box to sit the guitar on, (so as not to scratch it), though at this point no one would probably notice any new blemishes. Then I tracked down my special spray bottle of guitar cleaner which was on top of the armoire next to the little xylophone-playing girl wind-up toy. I’d learned early on to use an actual guitar cleaner after accidentally dissolving the decals off of another pawnshop treasure. Who was to know that what I thought was a high school shop project which I’d picked up for $12 in a Galveston pawn shop, was actually a short lived American creation from St. Louis. It looked like a double necked, 6-string/12-string Frankenstein guitar. The “Stratosphere Twin” logo had disappeared in seconds along with about $300 in collector’s value. It still brought $200 from Guitar Emporium so it wasn’t a total bust. But anyway, I started cleaning up the guitar peeling away the layers like an archaeologist on a dig. Most of the major gunk was coming off, but I noticed that the top layer of veneer or more likely plywood was bubbling up in a few places. Elmer’s Carpenters glue and a few clamps would straighten that out. After taking care of the glue job, I set the body aside to dry and took the electronics inside for testing. I plugged the cord into the jack only to be greeted by a loud buzzing roar. Note to self: One should always turn off the volume before plugging in any electronic equipment, especially if you’ve been playing Hendrix the night before. I turned the volume down and tapped on the pickup. It worked. Further tapping and knob turning determined that the volume and tone controls also worked. Wow, this one might not end up as “just a wall hanger” after all.

Let’s see. The electrics work, the body’s somewhat clean; the next task was the pick guard. Pick guards are designed to protect the surface finish of a guitar, but they also often serve as the support for the pick-up and controls. As this guitar’s finish was pretty much finished already, I needed a pick-guard to mount the gear on. The original pick-guard was definitely smashed into pieces. It was missing several good sized chunks so it would have to be replaced. You can buy pre-made pick-guards for some popular models of guitars like Strats or Les Pauls, but this guy was not of the popular school.

Also, as I was trying to prevent having any $ outlay on this project, I began searching for alternative options. Looking up I noticed the fluorescent light above me. The fixture was covered with a sort of crystallized sheet of plastic which served to diffuse the light. Hmmm. My wife probably wouldn’t notice that it was missing, so I stood on a chair and worked the sheet out of the light frame. I placed the sheet on the pizza box, (so as not to scratch it) and traced the shape of the original pick guard with a black magic marker. The guitar was going to look so cool with this sort of shiny crystal like pick guard! However, my exuberance waned when I tried to cut the sheet. Scissors, tin snips even a razor blade-box cutter led to jagged fractures that spread like cracking lake ice during a spring thaw. I then noticed one of my daughter’s old “In Sync” posters hanging on the wall. The glass was actually a thick mylar sheet. Eureka! I put the mylar on the pizza box, (so as not to scratch it) and proceeded to trace the pick-guard again. This would look so cool. You’d be able to see the controls and wires through the clear cover sort of like those Ampex Dan Armstrong guitars from the 60’s. However, once again the material would not cooperate. It would not cut smoothly. I laid the “new” clear pick-guard, with its jagged little edges down on the pizza box. It looked like I was going to have to fork out some boot and buy some real pick-guard material after all, and probably even have to pay someone to cut it out. I stared down at the failed experiment in frustration.

But then, wonderment of all, that little light bulb went off again. The rough, clear, cut-out was sitting on top of the pizza box. The Box was from Homerun Pizza and had the image of a baseball player batting in the center. The way the cut out was laying, the words “Home Run” and the batting figure fit perfectly into the pick-guard shape. With trepidation I traced the shape and then used the razor blade to cut out the guard. It fit.

I screwed the new pick-guard into place and plugged her up. A flip of the switch, a few plunks and the sound of the 60’s beamed out into the ether. Aaah, another successful guitar rescue.