Travel with us now Back to the – no, not the Future, but – the 1970s! Back when things were all natural and stuff! Back to nature. Long hair. Deer-hide jackets with fringe. Back when the taste for things au naturale began to show up in guitars. Back when clearcoat finishes began to reveal alternating laminates of light and dark wood, often maple and mahogany or walnut. Back to a time when Martin built this 1979 Martin EM-18. Say what? Martin??

Yes, Martha, that’s Martin. That’s because the late ’70s was one of Martin’s periodic failed attempts to break into the electric guitar market. That Martin never managed to challenge Fender or Gibson, or anyone else, for that matter, doesn’t mean they failed to make a pretty good guitar. Just that venturing outside your core competency can be pretty risky! So when I found this in a pawn shop in Philly, just down the pike from Nazareth, I had to pick it up!

Martin’s first attempts at making electrics occurred in the 1950s when it tried slapping DeArmond pickups on dreadnoughts. Ever hear of those? Then in 1961-62 Martin tried to market some thinline F-series electrics. These were pretty cool guitars with a unique design, but they never really caught on and were gone by mid-1965. Fast forward to the ’70s.

The 1970s were a strange time, to say the least! It had anti-war protests, wild inflation, fondue, gas shortages, odd new Japanese cars, presidential resignations, new STDs, and, man, disco. Disco! Guitarists were panicked by disco. Most of it was played on keyboard synthesizers and axe-slingers were afraid interest in guitars would disappear! Of course, they hadn’t reckoned on a young Eddie Van Halen! In contrast with the glitzy glam of disco spandex was the “back-to-nature” look.

The taste for natural-looking guitars coincided with the end of the Copy Era in 1978. Elger Guitars, the American beachhead of Hoshino, makers of Ibanez guitars, established itself by making high-quality copies of American guitars, as well as creating some interesting variations and original models (think Iceman). When Norlin/Gibson sued them, they introduced the Musicians and Studios, inspired by the neck-through, active creations of Alembic (and the Grateful Dead, kings of natural enjoyment). While somewhat more exotic in shape, Bernie Rico’s B.C. Rich guitars were also within this mode, as were the lesser known S.D.Curlees. 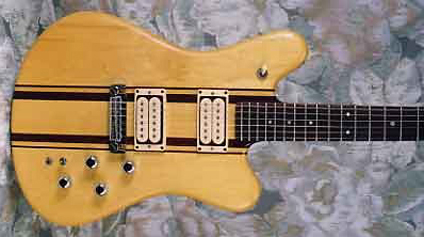 So anyhow it was into this mix of anti-disco naturalness that Martin tried again with its E Series. The Es were the creation of Dick Boak, who came to Martin as a draftsman in 1976 and by ’77 was given the project of coming up with some new electric guitars. Like many designs of the late ’70s, these have a kind of “organic” quality that’s unique in guitar chronology. The prototypes were produced in ’78 and the guitars entered production in 1979. Two guitars and one bass were made, all with glued-in necks and the retro “Stauffer-style” headstocks, reflecting Martin’s original 19th Century guitars. The guitars were the E-18 and EM-18. The E-18 came with a pair of DiMarzios and a phase switch. The EM-18 sported Mighty Mite pickups with series/parallel switches. The EB-18 was a bass version with one DiMarzio, though later versions had Schallers.

Following the au naturale aesthetics, this EM-18 has a 9-piece maple and rosewood laminated body, with a set-in mahogany neck. This is really a decent guitar, with screaming pickups. Mighty Mites were hot! Rarest of the ’70s Martins was the E-18 at 341 made. 874 EBs were produced. Most plentiful was the EM-18 with 1375 being produced until 1982. Serial numbers began at 1000 and this is #1034, so it was the 35th made.

Alas, for better or worse, the fad for “natural” guitars was pretty much over by the early ’80s, when these guitars bit the dust. Martin imported some Japanese-made Stingers following the E-affair, but never again really returned to the idea of competing in the solidbody arena. Dick Boak would later become one of Martin’s key marketing people. Finally, in fairness I have to say that despite the great fears about disco, there actually were a fair number of them that had some bitchin’ guitar parts! So it wasn’t quite as dire as we thought at the time. Seems to be a pattern there.